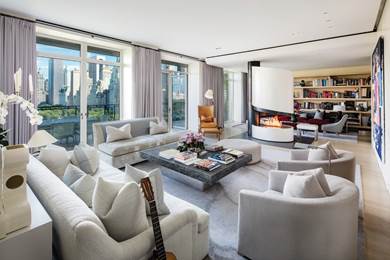 Roxanne didn’t have to put on the red light for this sale.

Renowned British rocker Sting and his wife Trudie Styler closed on the sale of their penthouse condo at 15 Central Park West for $50 million, nearly doubling what they paid for it a decade ago.

The celebrity couple was among the first buyers at the Robert A.M. Stern-designed limestone building, shelling out $27 million for the four-bedroom five-and-a-half bath apartment in 2008. Located between West 61st and 62nd Streets, the unit includes a nearly-400 s/f terrace that over looks Central Park.

Totaling more than 5,400 s/f, the condo includes a catering kitchen with two full-size refrigerators, a Wolf stove top, four ovens and a Miele dishwasher. Designed by Lee F. Mindel, the interior includes a fireplace and a spiral staircase that leads up to the second floor of the duplex.

The Master bedroom suite includes 70 feet of park side frontage as well as two large dressing rooms, a spa bathroom and an additional bathroom with rain shower and steam.