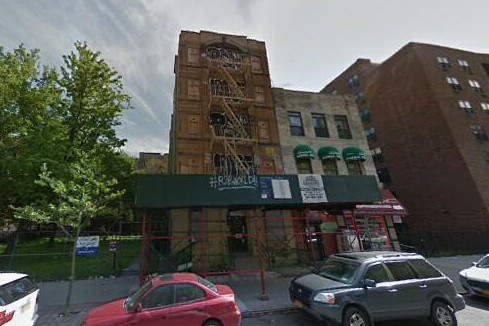 A Harlem landlord has admitted putting a family’s life in danger when he started ripping out walls and fire escapes in an effort to get them to leave their rent stabilized apartment.

Ephraim Vashovsky pleaded guilty in New York State Supreme Court today to Reckless Endangerment in the First Degree and Endangering the Welfare of a Child. He was sentenced  to conditional discharge, for which he’s required to complete 20 hours of community service and forfeit $350,000.

Vashovsky forced a couple and their five children, aged from one-to-12 years, to leave their fifth floor apartment at 21 East 115th Street after he purposefully made conditions there hazardous.

According to court documents, shortly after he bought the building for $3 million in May 2014, Vashovsky and his associates began a campaign to drive the family out in order to convert the building to luxury apartments.

The landlord shut off electricity, heat, hot water and running water in the building and  had workers perform major demolitions in violation of DOB and HPD regulations.

“Vashovsky knowingly created gravely dangerous living conditions, including the risk of an entire building collapse, by removing structural and load-bearing elements,” said court documents, which noted that workers removed critical fire retardant materials, fire escapes, and internal walls and floors – creating the risk of a fire ripping through the building or an inhabitant falling multiple stories.

“This landmark conviction establishes for the first time that New York landlords can and will be held criminally responsible for forcing tenants to live in life-threatening conditions,” said District Attorney Cyrus Vance.

“I hope today’s guilty plea puts landlords on notice: we will not tolerate intimidation and corner-cutting measures that endanger New Yorkers, and we will not hesitate to bring criminal charges when necessary.

Public Advocate Letitia James called Vashovsky “a repeat offender on my Worst Landlords List. I want to thank District Attorney Vance for ensuring this landlord was brought to justice and for protecting New Yorker’s right to a safe and decent home,” said James.

The case comes days after the City Council passed new legislation aimed at protecting tenants from  harassment. The Certification of No Harassment (CONH) legislation will require covered building owners seeking to demolish or make significant alterations to their building to prove they have not engaged in harassment before they can get the permits they need from the NYC Department of Buildings (DOB).

If a landlord is found to have harassed tenants, they would not be able to pull those permits for five years – unless they make a substantial portion of their building affordable to low-income families, with no public subsidy.

The CONH program has been in place in Hell’s Kitchen since 1974, and a similar requirement applies to all Single-Room Occupancy buildings (SROs) citywide. Tenant advocates have been working to expand the program to neighborhoods with rising rents, where tenants are at particular risk of displacement.

The new policy is the latest in a series of efforts under Mayor Bill de Blasio to protect tenants and increase affordable housing options.

State Attorney General Eric Schneiderman is also pursing a civil case against the man dubbed  “The Bernie Madoff of Landlords,” for harassing tenants of his 140 buildings, trying to get rid of rent-regulated residents to replace them with higher paying market rate tenants.

In New Rochelle, the strategy is: if you zone it they will come