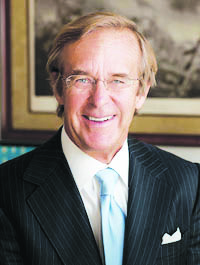 William Raveis is propagating what he hopes to be a real estate dynasty. Raveis, the son of a small town contractor, currently runs a real estate firm that bears his name, and he expects its success to persist far beyond his retirement.

Raveis, who is 69 years old, said that he is still far from handing over the business to his descendants. However, when he does, he would leave behind a legacy that would be difficult to eclipse.
His sons, Chris and Ryan, who currently split the task of handling the firm’s real estate and mortgage business, have undergone a long training program in preparation for succeeding their father.

“They’ve been around real estate since they (started) talking and walking,” Raveis said. “Since the day they were five years old, I brought them along to construction sites. Actually, they’ve put their initials in the concrete. There are several buildings with their initials in them.”

Since opening his William Raveis Real Estate in 1974, Raveis has grown his company to one of the most successful brokerage firms in the northeastern United States.

The firm started in a one-room office above a grocery store in Fairfield, Connecticut. Since then, the company has seen continuous growth. In 2014, William Raveis Real Estate, Mortgage & Insurance sold 17,400 units and posted annual real estate sales of $8.1 billion.

Currently, the family-owned firm employs 3,500 sales associates and has over 100 offices across New York City, Connecticut, Massachusetts, Rhode Island, Vermont, Maine, New Hampshire and New Jersey.
Last year, the firm expanded into its last unconquered space — New York City. It was the last phase of a cautious approach towards the Northeast’s largest market.

The firm started by buying a spot in the city’s periphery. In 2009, it acquired Realty 3 Real Estate, a boutique firm based in Rye. The process was completed when the company opened its 100th office in New York City in April of last year.

The company previously tried to buy its way into New York City market. In 2011, William Raveis Real Estate was in talks to acquire Bellmarc Realty. Raveis declined to provide the reasons behind the aborted partnership, only saying that the deal was scrapped because he was looking for the right recruits.

“We’ve been thinking about it for a long time. But we needed the right people to get involved with the company,” he said.

Raveis’ firm eventually made it to the promised land after 40 years of servicing New York City’s neighbors. The right people turned out to be former Douglas Elliman executives Paul Purcell and Kathy Braddock.

The pair, veteran New York brokres who co-founded the Manhattan office of Charles Rutenberg Realty, were the company’s biggest hires early on.

The company’s entry into the city was not smooth. The firm lost some top executives within its first year and it had to abandon plans to establish a development division. The company’s reaction to the setbacks has been to scale back its ambitions. However, it’s not an arrangement that is likely to persist.

In spite of saying that a development division would only “complicate” his company’s activities, Raveis said that they plan on circling back to the plans. “Probably in 2016,” he said.

The firm’s expansion also provided Raveis with a lesson in cutthroat business practices.

“The lack of co-operation of brokers, it’s just amazing to me. Everybody has their own silo. Nobody wants to co-operate with each other. We’re not used to that in other parts of our base. It extends to Westchester County even. The silo that these companies have, even though they’re all doing the job, they don’t speak to each other, which is surprising to me,” he said.

Aside from contending against the city’s unco-operative real estate players, Raveis’ firm also has to beat history.

Out of town companies have a track record of deflating in New York City; to avoid the fate of its predecessors, the company is looking to succeed by tapping into an untapped market segment. Recently, the firm focused on selling tired and weary Manhattan residents on moving to the suburbs.

“No company in Manhattan is taking advantage of that footprint,” he said “There are a lot of folks that want to get out of the city to do something else: for a weekend, or skiing, or just to go to their summer place.”

The firm, which now has 40 agents in New York City, plans to position itself as the ambassador to the suburbs. The company is looking to achieve this by expanding its footprint. According to Raveis, they plan to open four to six more offices around the city over the next two years.

NYBC salutes best of the building community at 2015 Recognition Dinner