Wife of billionaire Soros getting Manhattan townhouse as parting gift

The wife of billionaire Robort Soros is getting the coupleʼs New York townhouse.
City records show a transfer of the deed to the four story West 11th Street home “for a consideration of $10” from Robert Soros to Melissa Schiff Soros.
The 1899 house was valued at $10.5 million, likely the cheapest of the coupleʼs homes, which include a Catskills estate and a cottage on Marthaʼs Vineyard.
Robert Soros reportedly dumped his wife of 22 years for Meredith Ostrom, an artist who found fame creating pictures by rolling through paint with her naked body. 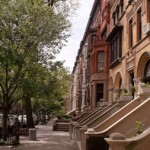 As president of Soros Fund Management, he is reportedly worth billions and Melissa is fighting for a share of his cash in the coupleʼs ongoing divorce.
According to the New York Post, Melissa has claimed that the couple’s prenuptial agreement is ʻambiguousʼ and that she is entitled to a sizeable amount of his wealth.

Bernard Clair, the high powered attorney for Melissa, refused to provide any details about the transaction or the divorce proceeding except to say that the townhouse transfer was “part and parcel of the parties’ ongoing efforts to resolve issues that could be resolved at this time.”