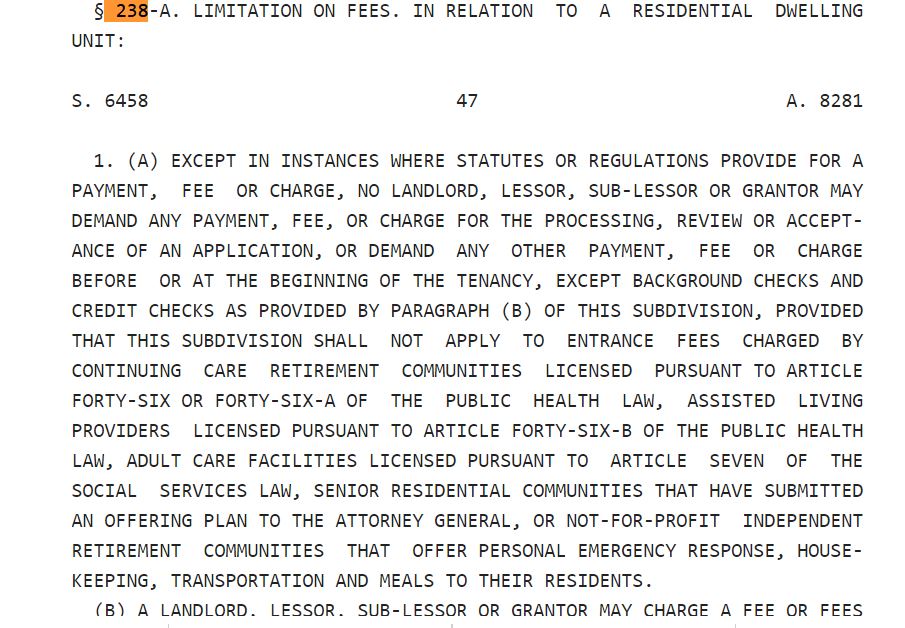 Tenants who paid a landlord broker fee in the past six months won’t be able to sue for the money back, according to the Department of State.

But moving forward, the DOS says the practice that’s been part of the New York City real estate landscape for decades is actually against the law – for now.

In a statement to Real Estate Weekly, the DOS said, “On Tuesday, an update to the guidance issued in September 2019 was posted online to provide guidance to the licensees governed by DOS. This is not intended to apply retroactively and future transactions should be entered into with this guidance in mind.”

Since that Tuesday directive noting that the controversial Housing Stability and Tenant Protection Act (HSTPA) that was passed by the State last summer prohibits charging tenants for a landlord broker, industry groups have launched a frantic campaign to decry the move and challenge its legality.

“Given that this guidance was issued without any advance public notice or discussion, it is unclear what was intended,” said Joe Strasburg, president of the Rent Stabilization Association, a group that represents 25,0000 rent stabilized landlords.

“Fundamentally, it is even more unclear whether the Secretary of State has the legal authority to impose this requirement in the form of a Guidance, as opposed to it being a regulation promulgated in accordance with the State Administrative Procedure Act.”

REBNY president James Whelan said, “The Department of State must rescind its Guidance on rental brokerage commissions. All stakeholders should have an opportunity to discuss the ramifications on agents, owners, and renters alike.

“We are exploring every avenue, including pursuing prompt legal action. We want to thank our members and other industry organizations who have joined our fight to reverse this misguided and harmful interpretation.”

Six months after it was passed, the controversial HSTP Act of 2019 that focused primarily on eliminating the ability of rent regulated landlords to raise rents through Major Capital Improvements and Individual Apartment Improvement charges, a temporary commission set up to monitor the application of the law continues to pore over its nearly 5,000 words in what the state has called an effort to “interpret the laws according to their plain meaning and consistent with the way they were intended to be.”

That interpretation means any agent acting on behalf of a landlord that accepts a broker fee paid by a tenant could be subject to discipline ranging from revocation of a license to a fine of $1,000.

As newspaper headlines heralded a free-for-all, REBNY took swift steps to reassure members saying, “The media headlines on this guidance have been misleading and do not accurately reflect the law or its narrow focus.”

With the guidance taking effect immediately, REBNY has advised all landlord agents not to collect a brokerage fee from a tenant “until further clarity is provided.”

According to StreetEasy, about 45 percent of New York City rental listings last year included a landlord broker’s fee, which is usually between eight and 15 percent of the annual rent amount.

With 30,000 licensed real estate agents in New York City alone, attorney Lisa Faham-Selzer said, “It looks like they are trying to wipe out an entire occupation. They have no way to make money.”

David Schlamm, founder and president of City Connections Realty, said. “Thousands of jobs will be lost both by brokers and staff. So much confusion, anger and anxiety this has brought on to so many people.”

Frederick Peters, CEO of Warburg Realty, said, “Yet another example of the state failing to understand the ramifications of its actions. It won’t save renters any money. It will complicate the transaction while at the same time guaranteeing a higher rent for the tenant, which works against that tenant going forward on year over year increases and/or renewals. It may be good politics but it’s bad policy.”

REBNY is calling on its members to bombard legislators and the State Department of State with emails, calls and letters voicing their opposition to the directive. Agents with questions can email governmentaffairs@rebny.com

“The Department of State must rescind its Guidance on rental brokerage commissions. All stakeholders should have an opportunity to discuss the ramifications on agents, owners, and renters alike,” said Whelan.

The RSA, meanwhile, is also rallying its members, the owners already hurting from the initial wave of HSTPA rules that curbed their rental income.

Calling his members “under siege” Joe Strasburg said, “This is just part of a bigger picture of how government is making it increasingly difficult on owners to maintain, upgrade and provide affordable housing for their tenants

“No matter which direction they turn – from the state legislature, to the City Council, to government agencies, rent-stabilized apartment owners, who provide the bulk of affordable housing, are under siege.”

The industry maintains this new directive won’t just hurt rental agents, it will result in higher rents for free market leases since landlords will put the cost of commissions into rent increases. Not only will rents be higher, but it will be compounded in subsequent years of lease terms (where broker fees are paid only once).

“This hurts tenants who often negotiate these fees. Landlords will now immediately treat it as a passthrough now that this negotiating point has been removed,” said REBNY.

Tenant advocates have a different take. Mike McKee, treasurer and spokesperson for TenantsPAC, said, “This is not new. This went into effect on June 14. There was a lot in the bill. You’re talking about a huge piece of legislation and a lot of people had trouble digesting its contents. These are very important consumer protections and they are very much overdue.

“This does not end broker fees. It ends the improper victimization and abuse of the broker system. If a tenant hires a broker to find him or her an apartment and it’s an unlinked relationship (to the landlord) the broker can collect a fee.

“It’s going to be easier for low-income and middle-income people to find an apartment. A lot of people can’t afford a security deposit let alone 15 percent of the rent.”

However, some lawyers have pointed to confusion over the wording in the HSTP Act which zeros in on “application fees”.

“Interestingly, the latest guidance document outright leaves whether the broker fee will be part of the $20 cap to the courts or local jurisdiction.  However, it does say that it will not subject a broker to discipline for collecting a broker fee in connection with a lease of a condominium or cooperative unit, when the board is not the owner of the rental unit.  I expect there will be a rash of litigation brought on by this new change,” said Cummins.

According to Lisa Faham-Selzer, the attorney from Kucker Marino and expert in landlord-tenant litigation, what the HSTPA says is still up for debate.

Noting that for six months, no one interpreted the law to mean landlord broker fees were illegal, Selzer believes there is potential for the law to change again.

“The DOS has expanded the law on their own. We didn’t think it applied to brokers’ fees when the law changed.”

She said the DOS can “re-clarify” their guidance at a later date, adding, “There are more bills in front of the State Assembly now, so further clarification can come in the form of actual bills if Albany decides this is not what they meant.”

One such bill is New York City Council Member Keith Powers’ legislation that would cap the amount a tenant pays towards the broker fee of a landlord’s real estate agent. Powers’ bill remains active and, if passed, could ultimately usurp anything in the HSTPA.

Powers told Real Estate Weekly, “I still see the need to have local enforcement over it since New York City is the biggest market for renters in the state.”

The language in the HSTPA is contained in Part M Section 238. REW publishes it here.

LIBOR, pigeons and progressives, oh my!