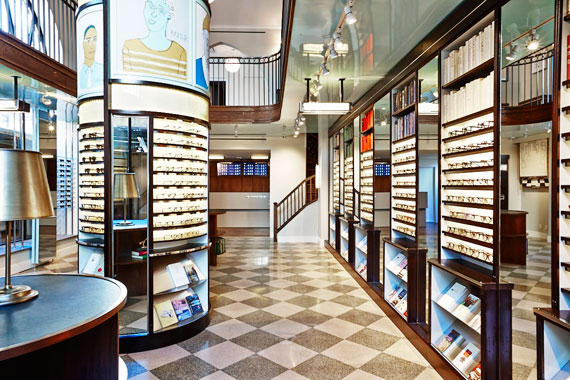 Winick Realty Group brokers Darrell Rubens and Lee Block announced that, after working closely with landlord Samy Mahfar of SMA Equities since 2012, a new tenant has leased the retail space at 1209 Lexington Avenue, on the southeast corner of East 82nd Street.

Warby Parker, the hip eyeglass brand with locations across the United States, has signed a long-term lease at the store, which was formerly home to Lascoff Pharmacy.

This location, which will be the brand’s third in Manhattan, consists of a 1,600 s/ ground floor and approximately 600 s/f each on the mezzanine and in the basement. Its features include 20 ft. ceilings,arched windows and 115 feet of wraparound frontage.

Working hand-in-hand with Mahfar, Warby Parker restored the century-old storefront to its former glory, focusing on every detail from the interior moldings to the original terrazzo floors from the early 1900s.

Not only concerned with retaining the unique character of the building, Mahfar was also aware of the needs of the community and the concerns of the community board, making sure to hold out for the tenant that best represented the vibe of the neighborhood.

“Over the course of our leasing efforts, we received numerous offers from national chains, restaurants and bars. These offers were higher than the deal we ultimately signed, but knowing that the neighbors were concerned about noise and other issues, I held out for a tenant I knew would be a good neighbor and a good member of the community,” said Mahfar.

“This area of Lexington Avenue still maintains the character of old New York with local and mom-and-pop stores, as opposed to the national chains that proliferate nearby 86th Street,” said Rubens. “Warby Parker will be a wonderful addition to the community.”