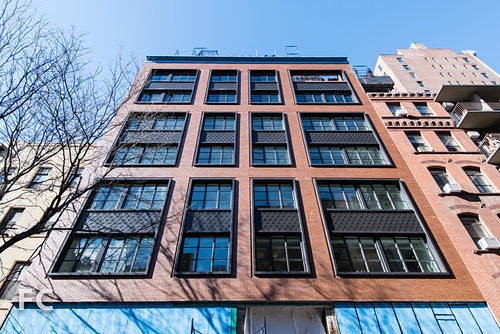 The fresh condominium building that now stands on 12 East 13th Street in Manhattan is offering a glimpse into the future, one that seems to have been lifted from a Jetsons episode.

The occupants of the eight apartments in the residential tower have the rare ability of depositing their cars into their building rather than parking it, all without the help of parking attendants.
The building, which, coincidentally, was once a parking garage, is one of the first residential buildings in New York City to have a robotic parking system.

This means that residents need not maneuver their vehicle to a small space like a commoner. They can merely glide to a street-level entrance then their car is magically whisked away to a parking garage on the second floor.

When they require transportation once again, they can summon their car through their smartphone and it will be ready within 90 seconds.

To be clear, robotic parking systems are not entirely new.

The first robotic parking garage in New York City opened in Chinatown in 2007. Since then, the technology has been incorporated in a number of residential projects.

Park Plus installed an automated parking facility at the One York building in Tribeca. The system, which moves cars vertically and horizontally to an open spot, contains 40 spaces.

Automotion Parking Systems is constructing what will be the largest automated parking garage in New York City. The facility, which will be installed in 275 Seabreeze Avenue in Brighton Beach, Brooklyn, will have 132 spaces and will be enclosed in a mixed-use development with retail and a medical office.
“How many buildings in New York have automated parking right now? Maybe two? I mean, that’s pretty rare,” said Steven Fisch, a co-managing principal at Continental Properties, which has developed the building with DHA Capital.

“If I want to get my car at four in the morning, in 90 seconds I can have my car. The attendant’s not asleep. The overnight guy, when I need my car, he’s asleep. I have to ring the bell. I feel bad. The automated parking garage, I covet that.”

While having robots deal with parking may be the way of the future, the building still maintains a connection to the past, one that stems from the corner of New York City that it occupies.

“We felt that, to people who live in the Village, showy-ness is not something that they appreciate,” said Cantor Pecorella’s Richard Cantor, who is in charge of marketing the building. “They’re here for a reason, which is the character and charm of the Village.” The result is a red-brick façade that DHA Capital head Josh Schuster described as “modern chic.”

“We did preserve a lot of the original bones of the building; the columns — these are original steel columns — and then we tried to speak the same architectural language by using the same darkened metal steel, you see that repeated throughout,” Schuster said.

The 45,000 s/f tower, which was designed by CetraRuddy, is nearing completion, and is being unwrapped to reveal a façade that, as Schuster puts it, “is not calling attention to itself in a very self-conscious way.”

“If you go into the street, and you look up, you’re not really seeing it shoved in your face. It’s subtle,” he said.

The same aversion to in-your-face aesthetics extends to its interiors.

The rooms are large — ranging from the low to high within the 4,000 s/f range — with 67 feet of frontage that runs along 13th Street and sliding, full-height glass doors that divide the rooms into sections.

It also contains modern conveniences that come with a multi-million dollar apartment.

The kitchens in the building are custom-made and are equipped with a Miele wall speed oven and refrigerator, a full height Gaggenau wine cooler and two Miele dishwashers.

The master bath, meanwhile, comes with a six-foot soaking tub and a countertop made of polished Calacatta Borghini marble.

The original building, which housed a Hertz parking garage, was eight stories high. The developers have since added four stories on top of the original tower, topping off the building with a structure made of glass.

The building only contains eight units, with 6,000 s/f allocated for amenities such as a gym and storage lockers.

All condos in the building are full floor units, most with four bedrooms and four baths.

Since sales were re-launched in February five condos have been listed, and three are now under contract. Units in the building were first brought to market in 2013, when construction was underway.
The developers withdrew the units though until potential buyers were able to actually walk through the finished product.

Residence 8, a three bedroom, three bathroom that forms a duplex with Residence 9, was sold for $13.8 million. Meanwhile, Residence 3 and Residence 4, both four bedroom, four bathroom units, were sold for $10.95 million and $11.25 million respectively.

While most developers would attribute sales activity to some wonder in home design and amenities, the people behind 12 East 13th Street point to something less tactile.

“There’s a sense of place. This isn’t something that you can just drop anywhere, which a lot of people do. You walk by this building and you say, ‘I get it,’” Fisch said.