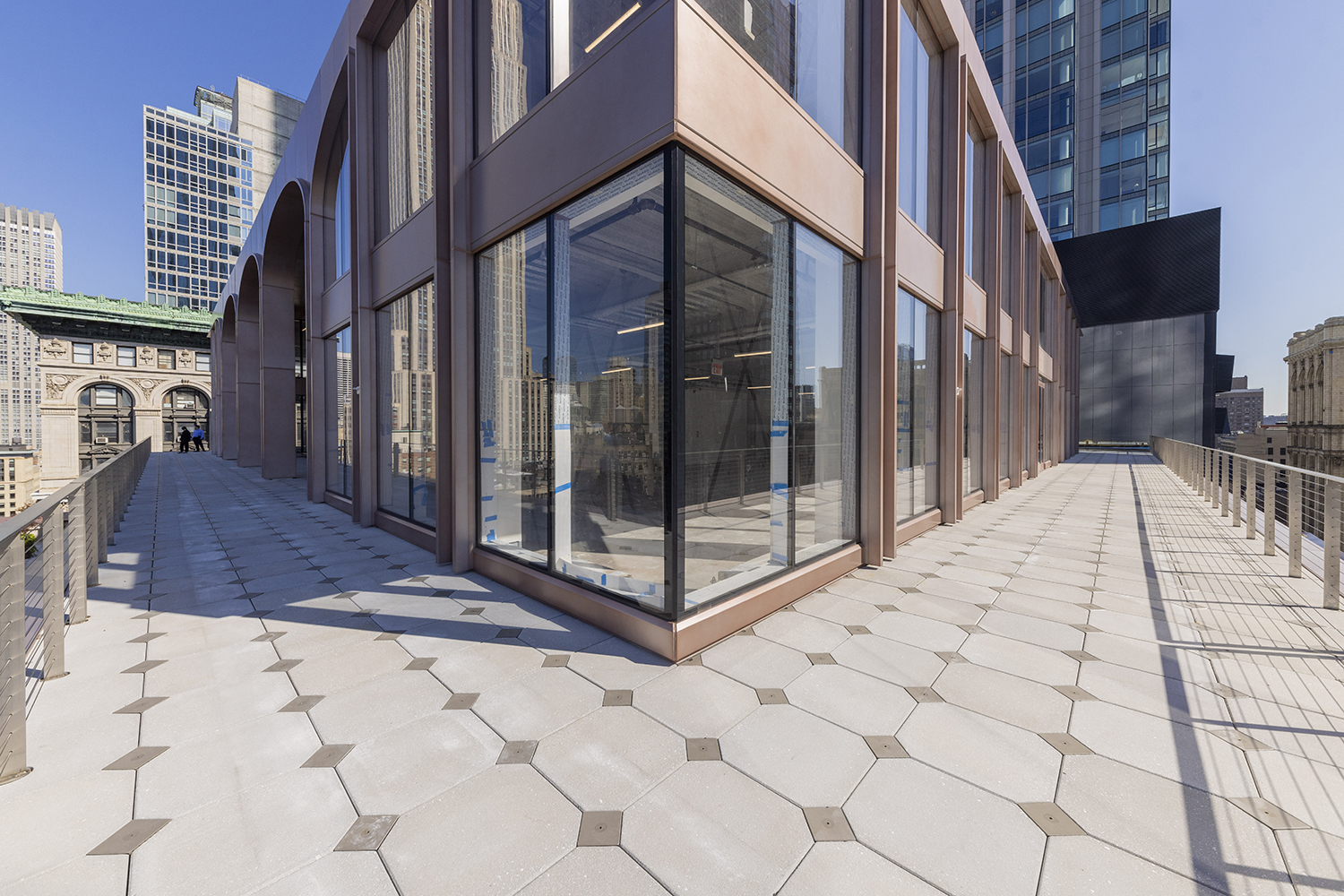 Tribeca Investment Group (TIG), PGIM Real Estate and Meadow Partners, today jointly announced the completion of the two-story, 34,000-square-foot penthouse addition at 295 Fifth Avenue. Designed by Studios Architecture to emulate the original neoclassical style of the building, the addition features floor-to-ceiling high-vision glass coupled with an arched metal panel system that recalls the building’s original arched windows and a custom copper-colored finish that complements the brick facade. The podium is part of the larger $350 million redevelopment of the 700,000-square-foot, 100-year-old ‘Textile Building’ in Midtown South, which sits as the epicenter between Madison Square Park, Penn Station, and Grand Central.

“We are thrilled to celebrate one more step forward in transforming this historic building into an inviting and high-performing workplace for the modern employee,” said Elliott Ingerman, TIG Founding Principal. “Studios Architecture has created a truly inspiring addition that is allowing this century-old architectural gem to realize its full potential. We have no doubt that future tenants will feel quite at home in these two new floors, with their stunning views, timeless architecture and ample natural light.”

Originally built in 1920 by notable builder George Backer, 295 Fifth Avenue was previously home to NYC textile tenants and at that time was considered the finest structure on Fifth Avenue. Construction of the 17-story building took less than a year, further elevating the building’s status as a marvel of modern-day construction. The new addition brings the building to 19 stories and unlocks new views of the Empire State Building by creating a terrace from the formerly underutilized rooftop.

“Our goal in designing the addition was to honor the character of the original building while ushering it into a new era,” said David Burns, Principal, Studios Architecture. “The result is expanded square footage that not only caters to contemporary needs in the workplace but also enhances the richness of the Midtown South architectural landscape.”

In addition to the two-story podium, Studios Architecture is making the necessary infrastructure upgrades, including elevators, windows and HVAC. New outdoor terraces and a courtyard garden respond to the growing demand for flexible work areas and unique collaboration zones that support increased productivity and talent recruitment and retention. The lobby interiors were thoughtfully redesigned by Studio MAI with biophilic elements interspersed throughout, open, light-filled areas and tonal, earthy color palettes that evoke feelings of comfort and warmth. The lobby features dedicated pockets for guests to enjoy a coffee, catch up on work or socialize with colleagues and friends.

295 Fifth Avenue is currently ready for tenant construction and will open for occupancy in early 2023.