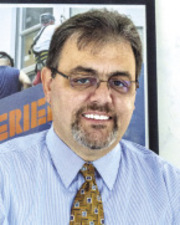 John Tsampas was recently named as Skyline Restoration’s new president. Tsampas headed business development for the firm for nearly 25 years.
Tsampas was one of Skyline’s original founders in 1989, together with John Kalafatis and Bill Pierrakeas.

He helped Skyline grow from a small operation performing roof repairs and grossing $500,000 a year to one of the largest full-service exterior restoration firms in the metro area with revenues over $66 million and a full-time staff of 70.

A graduate of Stony Brook University, Tsampas came to Skyline from a career in real estate where he was named number one seller nationwide by Century 21.
“Because I believe in New York and in the need to preserve all of its magnificent buildings, I always believed in Skyline. We are all about restoring architecture to its former glory. Even in the darkest economic times restoration is a necessity and Local Law 11 mandated various steps. New construction is boom and bust, much riskier and especially so in down times,” says Tsampas.