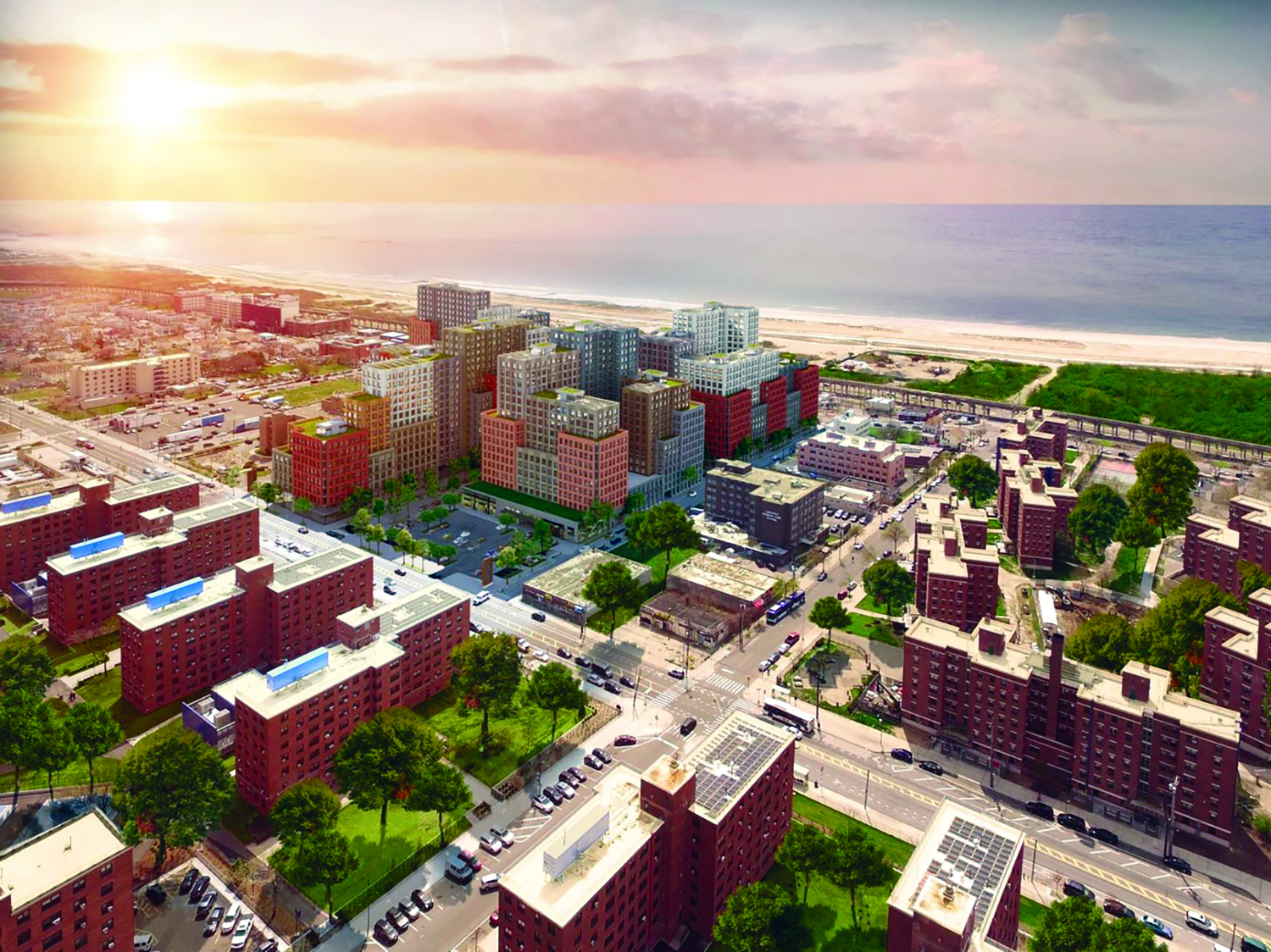 Tishman Speyer’s TS Communities announced it has entered an agreement with the Arker Companies to acquire and develop 10 of the 11 building sites that will make-up Edgemere Commons, a fully-approved, 100 percent affordable housing development in Far Rockaway, Queens.

Upon completion of all 11 buildings, Edgemere Commons will encompass 2,050 apartments, including 237 that will be set aside for seniors. The 2.2 million square foot mixed-use project, which was unanimously approved by the New York City Council in November 2019, will incorporate 38,000 square feet of publicly accessible open space, including a plaza that can host community events and a playground.

The Arker Companies, in partnership with Slate Property Group, will break ground on the first Edgemere Commons building, which will comprise 194 apartments and a 20,000 square-foot supermarket, in early 2022.

Tishman Speyer affiliates will develop, own and manage the remaining 10 buildings, including the retail, community and public spaces.  In addition to building a community center and creating new open spaces, the development team will launch a $2 million Community Benefits and Youth Development Fund.

Tishman Speyer has fully agreed to the commitments made on affordability levels and master plan conceived and approved through the collaborative process between the Arker Companies, the City of New York, Queens Borough President Donovan Richards and a coalition of Edgemere residents and community organizations.

“We are proud to join the Edgemere community and look forward to working with residents and local elected officials to advance the three key pillars of Edgemere Commons: affordability, community and resiliency,” said Gary Rodney.  “Real estate is more than buildings.  Our team is committed to building community and connection by focusing on what people need to make their lives and their neighborhoods better.”

“Edgemere Commons will increase the availability of affordable housing in Far Rockaway and bring many amenities that will benefit both existing and future residents,” said Queens Borough President Donovan Richards Jr.  “The planned supermarket is especially needed in this community, which is considered a food desert because of its lack of easy access to healthy and nutritious food. I look forward to making sure all of this project’s community benefits come to fruition and are fully enjoyed by Far Rockaway’s great residents.”

“We are excited to break ground on the first phase of Edgemere Commons in January and finally start to realize the promise of this revitalizing community project. With a full-scale grocery store, critically needed housing for low-income families, good paying jobs and spaces for people to enjoy and be proud of their neighborhood, we cannot wait to get started,” said Daniel Moritz, Principal, The Arker Companies. “In cooperation with Tishman Speyer, we will ensure that this project lives up to every promise made, as the community has put its faith in us, and we do not take that lightly. From eradicating a food desert to real investment through the community development fund, this is much bigger than the buildings itself. We are here in partnership with this community for generations to come as we proudly watch Edgemere become the thriving neighborhood it deserves.”

Edgemere Commons is being developed on the 9.34-acre site of the former Peninsula Hospital, which permanently closed in 2012 amid health, safety and financial difficulties in the aftermath of Superstorm Sandy.  The project fully adheres to the goals set forth by the Resilient Edgemere Community Plan, a community-driven initiative undertaken in the wake of Sandy. The community-driven plan called for the creation of more open spaces for local residents as well as additional retail that would serve the needs of the surrounding community and as a source of new jobs.

Edgemere Commons will feature a host of resiliency and storm preparedness measures designed to handle extreme weather events, including bioswales, bioretention rainwater system, solar panels, green and gray water infrastructure and extended tree pits. The development will also elevate several streets above sea level for long-term preparedness. All buildings will host standby generators with emergency outlets in each unit, as well as cooling rooms in case of extreme heat in the summer.

The construction and operation of Edgemere Commons is expected to create 350 jobs in construction and related industries annually as well as up to 650 permanent jobs, the bulk of which will be filled by residents from the local community. The project is anticipated to generate $1.5 billion in economic activity.

“While I’m hopeful that this project will help in addressing our City’s housing crisis, on a local level, the Edgemere Commons project is bringing much needed commercial space,” said community activist Manny Silva. “For as long as I can remember, our neighborhoods have been devoid of the basic amenities that any neighborhood needs to be successful. For miles there are no restaurants, no grocery stores, no clothing stores, and no entertainment. I truly look forward to the opportunities and services this project will bring to the Rockaways.”