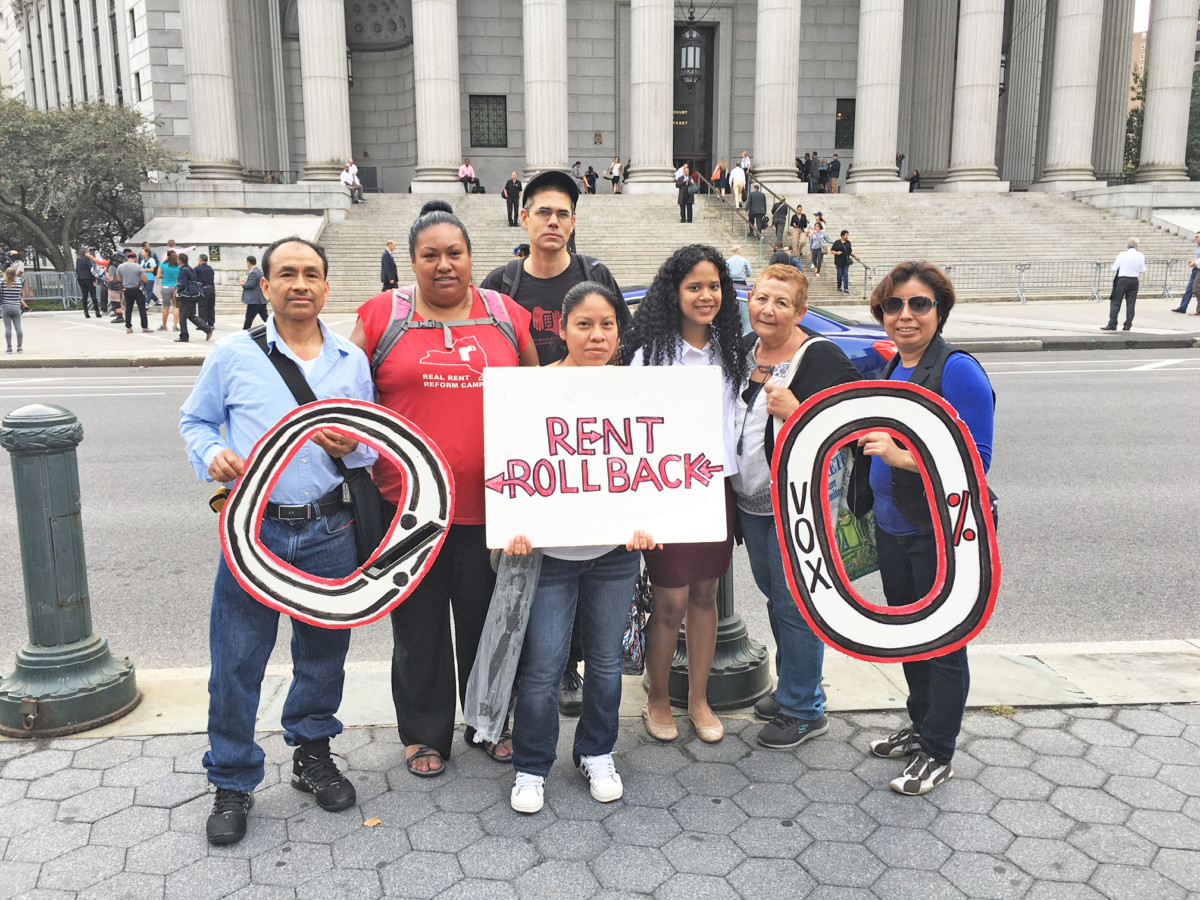 A group of tenants from around the city are hoping to intervene in a lawsuit that was filed in July aimed at stopping the rent freeze authorized a month earlier by the Rent Guidelines Board.

That lawsuit was filed by the Rent Stabilization Association, an organization that represents around 25,000 landlords in New York City.

On Tuesday morning, the tenant group announced its intention to fight the litigation at a rally held at Foley Square, near the courthouses.

The group, dubbed the Rent Justice Coalition, includes tenant and civic groups from around the city with legal representation by Legal Aid Society, Goddard Riverside and the Urban Justice Center.

Event organizer Larry Wood of Goddard Riverside told the crowd of tenants and activists, “The RSA says the Rent Guidelines Board used criteria they shouldn’t have. The RSA claims tenant affordability shouldn’t have been considered. It’s outrageous to say they’re not supposed to think about tenant hardship.”

The suit had argued that the issue of affordability shouldn’t be handled by the RGB, but by government-sponsored rent relief subsidies.

Wood went on to slam the RSA’s litigation as “a political stunt.

“We know all the data called for a rollback,” he said. “Landlords were getting much higher increases than what the data supported the last years of the Bloomberg administration. We made a good argument for a rent rollback but we didn’t get it, but we did get a freeze. Landlords weren’t happy about that.”

One of the attorneys, Robert Desir of the Legal Aid Society, also defended the RGB’s decision to issue a rent freeze. “We think there’s plenty of room (within the law) to consider tenant affordability.”

Kallos told tenants, “This is a really bad year to be challenging a rent freeze because this year (landlords’) costs went down. I hope a judge looks at this and gives us a rollback.”

A few tenants spoke about gentrification and not being able to afford climbing rents as working people or retirees.

Around 30 people attended the event, keeping their distance from a courthouse across the street, where “Law & Order: Special Victims Unit” was filming an episode.

In response to the coalition’s announcement that they’d be filing a motion of intervention, the RSA said it was the RGB’s rent freeze that was the politically charged move, not its decision to sue.

“While everyone has the right to voice their opinion, here’s the reality,” said Joseph Strasburg, president of the RSA, in a written statement.

“They should be aiming their vitriol at de Blasio and his politically motivated housing agenda. It’s the puppet master pulling the strings of the supposedly independent RGB. Rent freezes choke off the income that landlords need to A) re-invest in their buildings for improvements and repairs that maintain and preserve the city’s existing 1 million affordable rental units, and B) pay annual property tax and water rate increases – revenue that the city uses to hire teachers, police officers and firefighters.

“Rent freezes are a good ploy for votes, but are bad for tenants, affordable housing and the city.”