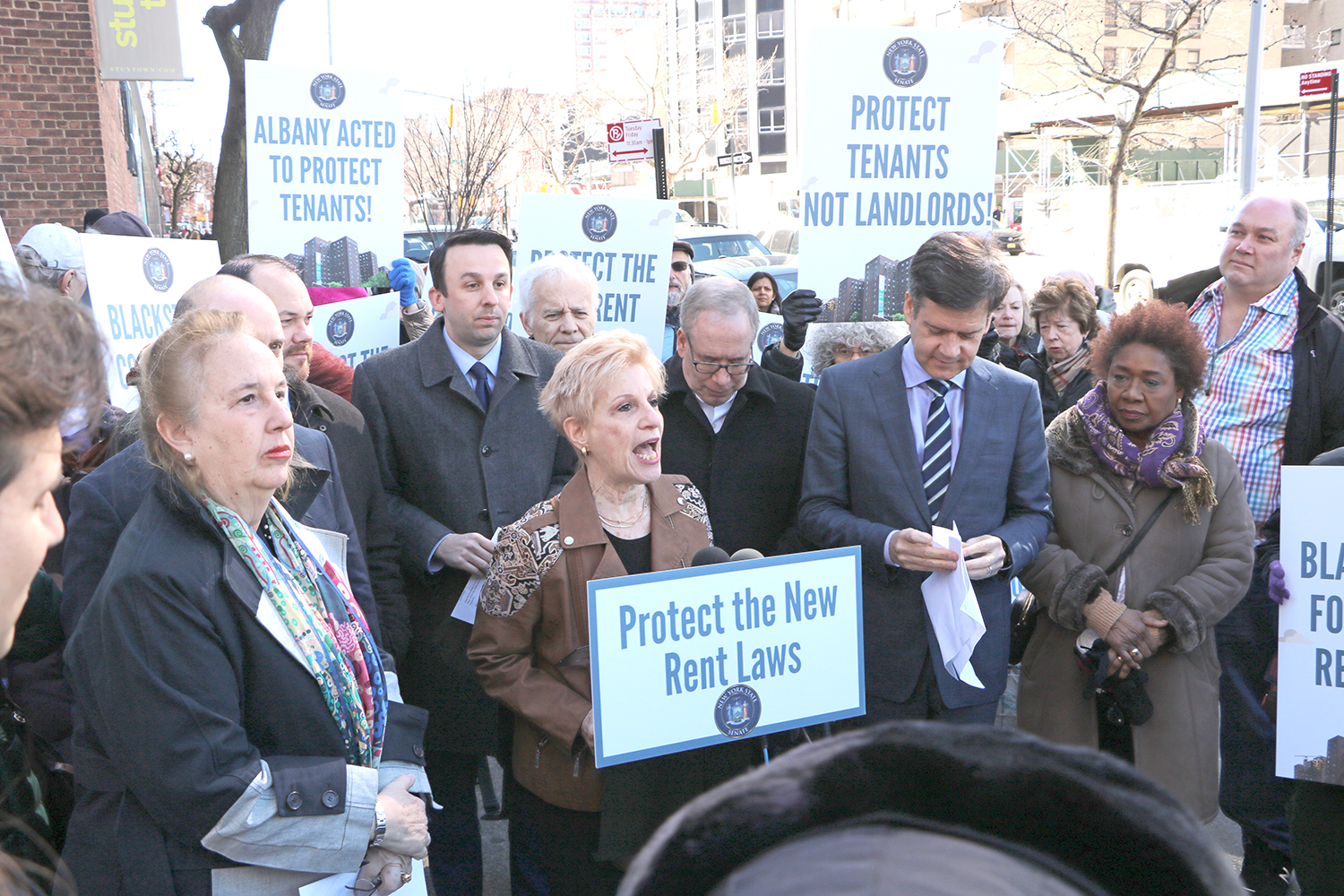 The Stuyvesant Town-Peter Cooper Village Tenants Association filed a lawsuit against property owner Blackstone last week in response to an attempt to deregulate more than 6,000 apartments.

Blackstone is attempting to deregulate units that are currently under the J-51 tax exemption, which expires at the end of June, and increase rents on those apartments for leases renewed or starting in July or later. The private equity firm is arguing that the regulatory agreement Blackstone signed with the city in 2015 supersedes the rent laws the state legislature passed last June, but tenant advocates and local elected officials argued at a press conference in Stuy Town last Thursday that the rent laws abolished deregulation all apartments, regardless of previous agreements.

“The new law is clear and unambiguous,” Tenants Association President Susan Steinberg said. “Blackstone Group is of the opinion that these pro-tenant reforms do not apply to them. We disagree. They cannot disregard state rent law and raise rents and deregulate units as if the law had never been changed.”

State elected officials at the press conference said that they were very specific when writing the rent laws that passed and that Blackstone was not interpreting the law as it was intended.

“After dozens of hours of hearings and floor debate, the legislature overwhelmingly approved carefully-considered legislation last June to protect the long-term affordability of rent-stabilized housing and prevent the deregulation of units and a resultant worsening of the State’s homeless crisis,” Assemblymember Harvey Epstein said. “Despite being the wealthiest landlord in the world, Blackstone must also follow the law.”

Local elected officials argued at the press conference that deregulating the units would be a violation of the Housing Stability and Tenant Protection Act (HSTPA), which established that any apartment that was rent-regulated when the law passed on June 14, 2019, would remain subject to rent regulation. Since these units were protected by rent regulation when the law passed, they argued, deregulating the units would be illegal.

The lawsuit from the TA aims to protect the more than 6,200 rent-stabilized units that were illegally deregulated while the owners were receiving J-51 tax benefits. The J-51 program is a property tax exemption and abatement given to owners for renovating a residential building.

The units Blackstone is attempting to deregulate include those occupied by original members of the Roberts v. Tishman Speyer class settlement, as well as the units occupied by tenants who moved in after the settlement. The landmark case established that thousands of apartments in STPCV were subject to rent regulation after previous owners illegally deregulated apartments in the 1990s and early 2000s while they were receiving J-51 tax benefits.

The court ruled in 2009 that these apartments needed to be re-regulated and as a result of the case, 4,300 units were put back into rent stabilization after the ruling and almost 2,000 more have been re-regulated since then.

The regulatory agreement that was signed in 2015 ensured that 5,000 units in Stuyvesant Town and Peter Cooper Village are permanently affordable, but the remainder of the units, which included Roberts tenants, were on a countdown to deregulation once the J-51 program expired. Rent increases on these units would be capped to 5% per year for five years starting in 2020, which is significantly higher than rent increases that have been approved by the Rent Guidelines Board in the last few years.

The Tenants Association, along with Steinberg and four residents, are named as the plaintiffs in the suit filed against Blackstone, the City of New York, the City Housing Development Corporation and the State of New York Homes and Community Renewal.

Although the city is named as one of the defendants in the lawsuit, the Real Deal reported the day after the press conference that the de Blasio administration has sided with the tenants in the case.

“Rent reforms ushered in a new era for New York City tenants, providing greater security for families and strengthening neighborhoods,” a spokesperson for the mayor’s office said in a statement to the Real Deal. “The terms of the earlier litigation make clear that these homes are subject to the stricter rent laws and tenant protections and they must remain under those protections.”

In an email to residents on Thursday, StuyTown Property Services General Manager Rick Hayduk said that Blackstone has committed to not increasing rents beyond the Rent Guidelines Board threshold until the case has been settled.