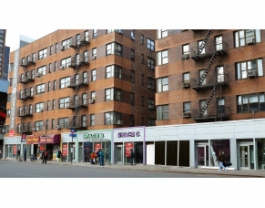 Stonehenge Partners announced that Woops!, the macaron purveyor, has signed an 800 s/f lease at 1143 Second Ave. in the Upper East Side.

“We have historically leased our commercial spaces to countless small businesses, and continue to support the entrepreneurship of our city by expanding their presence,” said Ofer Yardeni, chairman and CEO. “We appreciate what small businesses like Woops! can do for the market and enjoyed celebrating its tenancy, as well as all other entrepreneurs, on Small Business Saturday for the ‘Shop Small’ movement.”

Woops! Bakeshop is the brick-and-mortar off-spin of the boutique macaron company Woops!, which launched in December 2012. Founded by a group of New Yorkers who originate from France, Israel and India, Woops! Bakeshop offers a handmade macarons and cookies, artisanal pastries from around the world, and its own signature blend of coffee.

“It was important to us to open a bakeshop where the coffee was as high quality as the pastries, and not just an afterthought, ” said co-founder Jonathan Webb. Since 2013, Woops! has grown the brand to 15 shops throughout the tri-state area, including a flagship cafe at 548 Driggs Avenue in Williamsburg, Brooklyn and kiosks at Port Authority Bus Terminal and Bryant Park’s Holiday Shops in Manhattan.

At the base of Stonehenge 61, the façade of 1143 Second Ave. was recently updated by Stonehenge to establish quality retail for the residents of this  neighborhood. The 13,000 s/f retail gallery comprises 8,000 s/f on the ground floor and 5,000 s/f in the basement, and features a glass storefront on Second Avenue with full-block frontage from 60th to 61ststreets. The retail property is located at the entrance of the Ed Koch 59th Street Bridge, steps away from the MTA 59thStreet/Third Avenue Transit Hub.

The landlord was represented by Richard Skulnik, Andrew Mandell, Jason Maurer, and Daniel Mirea at Ripco, the brokerage that is also handling the remaining available square footage along the retail corridor. Gary Lowitt of Baloo Properties, who handles all leasing for Woops! Bakeshop, represented the tenant in this the deal.

Bagel joint to open on 14th