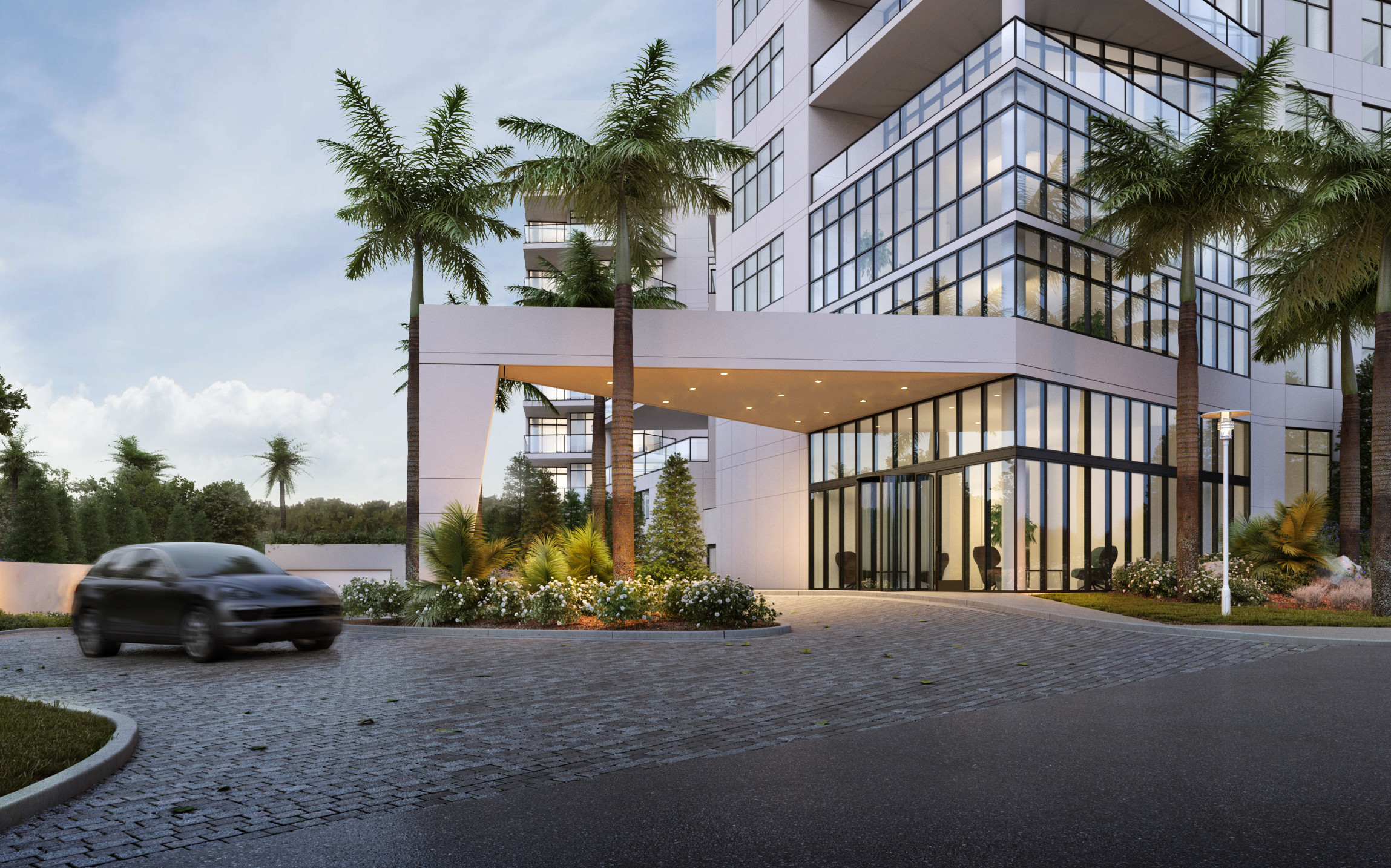 South Beach-inspired condos making a splash on the Jersey Shore

Looking for a South Beach lifestyle without having to get on a plane? Look no further.

A New Jersey-based development firm is building a South Beach-inspired condo development on the Jersey Shore for those looking for Florida living in their backyard, complete with palm trees and oceanfront views.

Developer Mimi Feliciano and her husband Edwin, of FEM Real Estate, were looking for a new development site when they found the perfect spot, a site pre-approved for 11 units on the Jersey Shore. They bought it looking to create something special, inspired by what they loved.

The native New Jerseyans and busy commercial real estate developers loved visiting South Beach in Miami, but found it hard to get away from work. But the answer proved to be easy; build South Beach on the Jersey Shore. 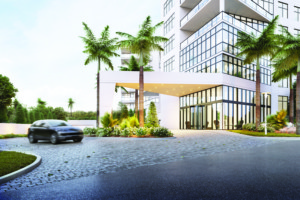 “We thought, couldn’t we create South Beach here in New Jersey?” Feliciano told Broker’s Weekly.  “We love the proximity to New York and it’s close to all the action of our lives and businesses. We don’t have time to get on a plane, but we want the high-end lifestyle.”

The couple shared the plan with the town of Long Branch on the Jersey Shore. Not only did the town approve of the plan, they encouraged them to make it bigger, with the project encompassing an entire city block, which they did.

“We’ve had apartments as investors over the years, but this is the first condo development,” said Feliciano.

Now, the project, named aptly South Beach at Long Branch, has a total of 47 units, covers an entire city block, and is designed inside and out in a style that emulates the mega-popular tourist area of Miami.

The condo project sits in the middle of a redevelopment zone the town created in the early 2000s to spur more development along the waterfront.
Two eight-story towers will be connected by a plaza level and saltwater infinity pool with oceanfront views.

Within the redevelopment zone there are several other projects in the works, but so far South Beach at Long Branch is the first one to break ground. Construction has started on the 1.7-acre project, and crews have just begun pouring cement.

It was 2014 when Feliciano and her husband first began putting the project together, which took purchasing six parcels and putting them into one site. Now, the developers are shooting for a December 2018 completion date. 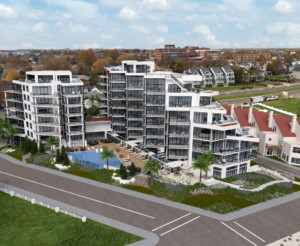 Feliciano and the development team hosted a VIP event recently to show off the project, and the party drew around 90 people. Between the market collapse in 2008 to Hurricane Sandy, the Long Branch area hadn’t experienced much new development in some years, and Feliciano said residents are eager for something new.

“It was very well-received, they thought it was very different, very high-end,” said Feliciano. “There’s a real pent-up demand. It’s just been a bunch of years, so there’s been a real interest in it.”

Feliciano discovered Long Branch over ten years ago, and purchase a place herself there.
The town’s main development, Pier Village, is a mixed-use area with hotels, restaurants and retail, as well as condos. “It’s the only thing like it on the Jersey Shore with that style, and now with this particular development we’re doing, it brings regular condos to a different level,” said Feliciano. “We’re bringing a different style – the glass, the design of the building – it’s very unique construction.”

“The style of South Beach at Long Branch is sleek, sophisticated and personifies five-star luxury,” said Gurowitz in a press release. “We are using the finest materials for the design, such as Italian porcelain in all kitchens, and floor-to-ceiling windows to create beautiful, airy living spaces set against the backdrop of the sea. The rich beauty of the interior extends to our outdoor living areas characterized by expansive patios, raised sand decks, an infinity edge saltwater pool and lush landscaping.”

Over the past decade, the husband-and-wife development team have designed and built more than 120,000 s/f. of state-of-the-art medical and skilled nursing facilities. 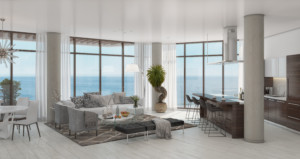 The luxury features that had been innovative additions in the medical projects they worked on inspired some of the amenities they have included in South Beach at Long Branch.

Every unit has an ocean view and every deck has a fireplace or fire pit, an addition the team wanted to include to promote outdoor living. And of course, one of the biggest perks, is the proximity to the city. The development is three blocks from a NJ Transit train station, and there is a ferry stop about 8 miles from the complex that makes stops in Lower and Midtown Manhattan, a trip that

Feliciano says takes 35 to 40 minutes. And by car, it’s less than an hour to Manhattan.

Feliciano and her team are expecting a mix of buyers from New York City, New Jersey and other nearby areas that are in the later stages of their career and looking to extend their work years but still have a Florida-type lifestyle.

“The people we’ve attracted to this lifestyle are used to the highest end of luxury, are very used to a Manhattan lifestyle, a Palm Beach lifestyle, and are very successful and are looking for a maintenance-free lifestyle with lots of services,” said Feliciano.

Some of those services include elevators that open directly into units, a saltwater pool, fitness center, and a dining club with a chef on the weekends.

Amenities will also include a private dining room, great room, four guest suites for owners and overnight guests as well as extensive valet underground parking for a minimum of two cars, with a lift for most units.

The area has the advantage of being 22 feet above sea level, which was fortunate when Hurricane Sandy hammered the Jersey Shore in 2012. Long Branch had its boardwalk rebuilt, but otherwise there was minimal damage to homes and buildings.

The team applied for and have received Department of Consumer Affairs (DCA) approval, which means they can advertise in New York City, where they feel many prospective buyers live and/or work.

Sales of the units launched two weeks ago, and the team has already had a few offers. And as the team looks to begin advertising in the New York City market, they look forward to drawing even more interest to the project.

Feliciano sees the oceanfront location as a healing and meditative environment, one that she wants for herself, and the people that will live there.
“People want to work, but they want to have a healthy lifestyle and not something so stressful you’re killing yourself,” said Feliciano.