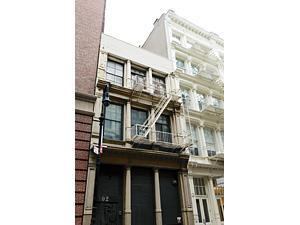 The building is located on what is becoming one of the top luxury boutique blocks of SoHo between Prince Street and Spring Street, across the street from Tiffany and Co. and surrounded by such tenants as Ralph Lauren, Apple, Etro, Fendi, Dior, Chloe, and Louis Vuitton.

Jeffrey Fishman and Ross Berkowitz of RKF represented the buyer and the seller, Bldg Greene Street, LLC, which had owned the building for two years.

The purchase is the latest in a series in SoHo by SL Green, establishing the company’s presence in the submarket. Area holdings already include interests in 121 Greene Street, 115 Spring Street, 131-137 Spring Street and 530-536 Broadway.

SL Green managing director Brett Herschenfeld commented, “SoHo has experienced a tremendous surge in upscale shopping, fueled by both tourism and evolving demographics. We expect the current trends to continue for the long-term, based on the strong economic outlook and compelling neighborhood features. SL Green will now reposition the property, consistent with our other investments in the area.”