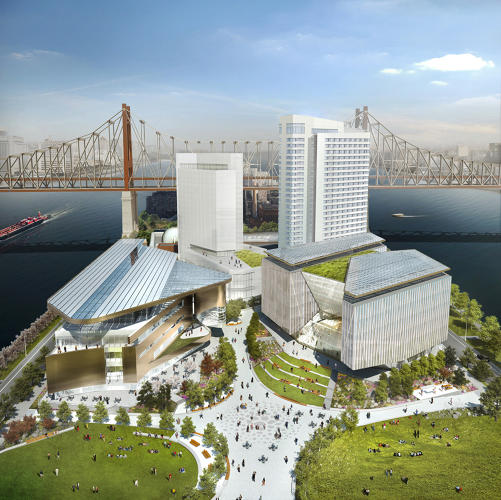 Forest City Ratner Companies announced that Two Sigma Investments, LP, a tech and investment firm, is the first company to be selected to locate at The Bridge at Cornell Tech.

The Bridge is a first-of-its-kind building that will house a mix of cutting-edge companies working alongside groundbreaking Cornell academic teams: from recent Cornell Tech graduates hustling to commercialize a new idea, to start-ups on the verge of explosive growth, and established companies developing leading edge technologies and products.

Two Sigma will open a new Collision Lab in the space, where engineers from its R&D team will tackle difficult challenges away from the company’s main campus and interact with innovative start-up companies backed by Two Sigma Ventures, a division of Two Sigma.

The Collision Lab will also serve as a tool for Two Sigma to retain and attract the best talent by providing unique access to Cornell Tech’s dynamic ecosystem of innovation.

The Bridge will open on Roosevelt Island in September as part of the first phase of the Cornell Tech campus.

“Two Sigma is dedicated to creating and using technology in groundbreaking new ways, and their Collision Lab is a perfect fit for The Bridge at Cornell Tech,” said MaryAnne Gilmartin, president and CEO of Forest City Ratner Companies. “The Bridge is designed to encourage the random interactions and deep collaborations that solve problems, build partnerships and accelerate new products to market. Two Sigma will be able to take advantage of their close proximity to Cornell Tech students, faculty and researchers in an ecosystem driving innovation.”

“Cornell Tech is reinventing the way we live and work for the digital age, bringing research and industry together, and The Bridge is at the core,” said Cornell Tech Dean Dan Huttenlocher.

“Two Sigma is a terrific example of how technology can be applied to change the world and a fitting first tenant for the Bridge. We can’t wait to open our Roosevelt Island campus in the fall, as a revolutionary new place for graduate research and education, convening the tech community and developing new technologies and products that will have an impact on our society.”

“Collaboration is at the heart of Two Sigma’s mission so we jumped at the opportunity to be in The Bridge at Cornell Tech, a place uniquely designed to bring science, technology and entrepreneurship together,” said Dr. Alfred Spector, Chief Technology Officer at Two Sigma.

“We’re excited to launch the Collision Lab, a space that will allow our engineers to interact with Two Sigma-backed start-ups in the unique atmosphere of innovation that will exist at Cornell Tech. Being in the Bridge will help Two Sigma accelerate solutions and continue to attract industry-leading talent.”
With this announcement, Forest City is officially launching the building and accepting applications from technology companies who are interested in a front row seat for the recruitment of talent, the opportunity to collaborate with students and faculty at Cornell Tech, and the opportunity to have a space where R&D and innovation teams can work in an intense, creative and productive environment to develop, prototype and commercialize new products and technologies.

With more than 40 percent of the building pre-leased, The Bridge at Cornell Tech offers the opportunity for a limited number of start-ups and established companies pushing the edge of digital technology to be on the Cornell Tech campus.

Forest City will select a mix of start-ups and established companies from a variety of industries to create an ecosystem of firms focused on catalyzing innovation and the commercialization of new products and technologies, driving economic growth for New York.

The Bridge will open in September at the Cornell Tech campus on Roosevelt Island, along with The Bloomberg Center – in honor of Emma and Georgina Bloomberg, the first academic building on campus, and The House, a residential building for graduate students, faculty and staff that will be the world’s largest Passive House.