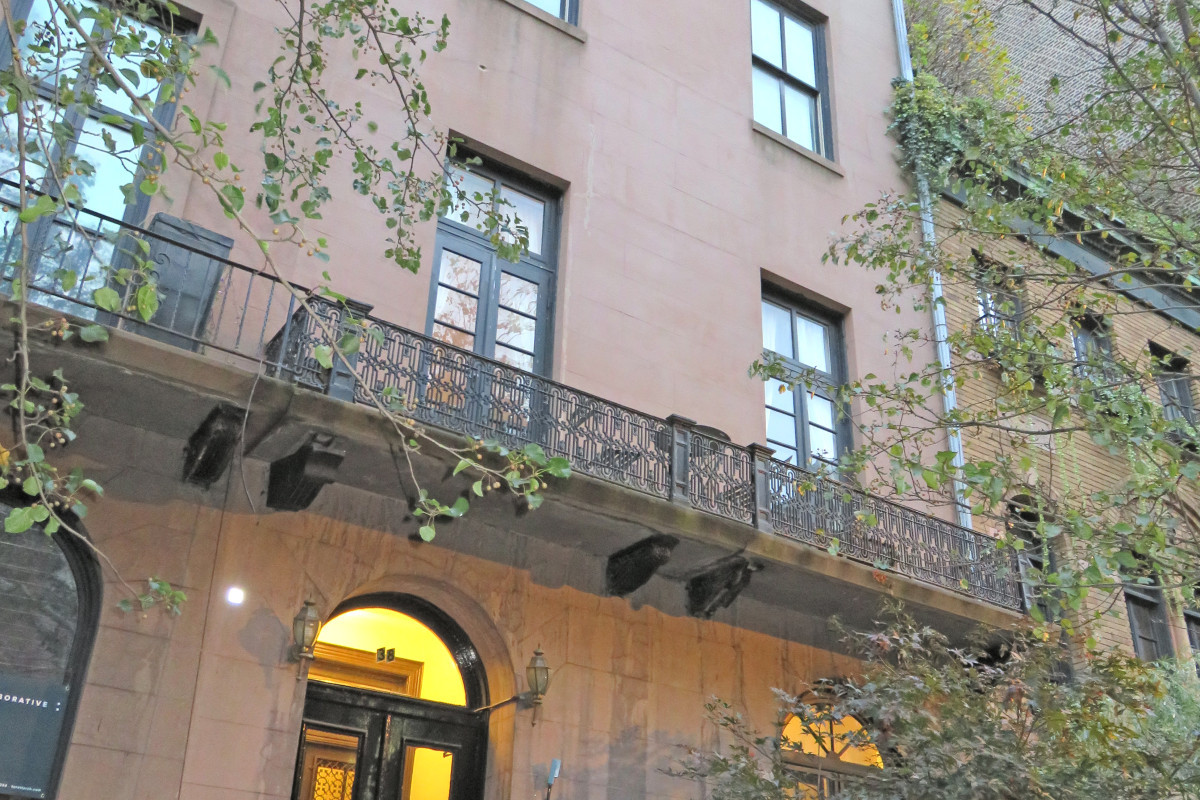 Village prize up for grabs

Eastern Consolidated has been selected as the exclusive agent to market a 19th Century, five-story townhouse at 38 West 10th Street designed by James Renwick, Jr., the architect for St. Patrick’s Cathedral and Grace Church.

The 8,200 s/f, Anglo-Italianate style row house between Fifth and Sixth Avenues has an asking price of $17.2 million and will be delivered vacant.

Currently configured as an owner’s triplex apartment with a landscaped garden, 38 West 10th Street also offers six rental apartments. Every floor has two fireplaces and there are seven original mantels throughout the building.

“This is a rare opportunity for a user to convert a multifamily townhouse on the historic Gold Coast of Greenwich Village for single family use, or for a developer/investor to reposition it,” Aghravi said.  “The 22-foot-wide property was most recently renovated in 2009 and is being offered for sale for the first time in 20 years.”

The townhouse is part of West 10th Street’s English Terrace Row, nine brownstones with ornate cast-iron balconies at 20-38 West 10th Street that were designed by Renwick and built between 1856 and 1858.

West 10th between Fifth and Sixth Avenues is the most prominent tree-lined block in Greenwich Village and contains a significant number of original houses dating from the mid-1800s, many of which have been meticulously restored.

The street has a rich history with notable and famous current and past residents including Michael Ovitz (founder of CAA), Sean Parker (Facebook, co-founder), Mick Jagger, and Daniel Day Lewis.

Ariel Property Advisors has been retained to sell The York Avenue Assemblage, a mixed-use development site featuring 175 ft. of retail frontage at the southeast corner of York Avenue and East 86th Street on the s Upper East Side.

The asking price for the package is $49 million.

Zoning for 1622-32 York Avenue provides approximately 75,095 buildable square feet, as-of-right for a new, mixed-use building. Additionally, developers can increase the size of the building to 90,012 s/f with inclusionary housing.

By selling the shares simultaneously, the transaction unlocked greater value for the seven loft owners, many of whom have owned their apartments since the building first went co-op in 1981.

The co-op consists of loft apartments on the second, third, and fourth floors, and an artist studio/loft apartment and one retail space on the ground floor.

Combining the ground floor apartment and retail will result in 47 ft. of frontage on Crosby Street between Spring and Broome Streets. The property also offers 6,537 s/f of development rights.

“Many long-term co-op owners in SoHo are sitting on a gold mine and they don’t even realize it,” Hauspurg said.

“By selling all of their shares at the same time, the co-op owners at 61-63 Crosby Street received an average of over $2,000 per square foot for their apartments, far more than if they had sold the units individually.”

Polsinelli said the new owners are planning to reposition the building to attract major retailers on the first and second floors, and rent the upper floors as office space.”

Lee & Associates NYC has been named the exclusive leasing agent for the site.

The property is being marketed to prospective retail tenants by brokers who say the existing building is ideal for a big-box user but could be restructured to create a 20-25,000 s/f anchor space with 10-15,000 s/f of smaller inline retail spaces along the 207th Street corridor.

The building also includes more than 12,000s/f of basement space and a large freight entrance on 206th Street.

In addition to the existing building, the partnership also intends to develop a 14,000 s/f outparcel on the eastern portion of the site for an array of retail uses.

“We feel that the site presents an ideal opportunity to be creative with multiple development opportunities including long term potential for residential in a burgeoning and vibrant neighborhood,” said Charles Bendit, co-CEO of Taconic Investment Partners.

“This property is everything a retailer could want including transportation accessibility, an enormous amount of parking – a rarity in Manhattan – and a highly visible location,” said James Wacht, principal of Cogswell-Lee and president, Lee & Associates NYC.

The properties were built in 1925 and consist of mostly one-and-two bedroom apartments. Some 35 percent of units are rented at market rent, which leaves the new owner a tremendous amount of additional income potential, said the brokers.

The buildings are close to major subway lines and to Prospect Park.

According to public records, A two-story retail building at 771 Washington Street in the Meatpacking District has sold for $71 million.

Public records note the seller was Alan Washington LLC, which has links to the Zegna family in Italy. The purchasing entity was 771 Washington Street Investor LLC, which was a local investment group including the Harch Group and Toms Capital LLC.

Ivan Hakimian and Eli Scharf of HPNY were involved in the off market transaction.

Thor heads to Columbia U

Thor Residential has closed on a three-building package across the street from Columbia University for $34,400,000.

The buildings 556 – 566 W 126th Street consist of 58 residential units and five stores. The buildings are a combined 52,000 s/f and over 100 ft. of retail frontage direct across from Columbia University’s 17 acre Manhattanville expansion, which is slated to be completed in 2017.

The seller, BCB Property Management led by Bennat Berger, purchased the properties for $23.5 million in 2013 and 2014. The invested a significant amount in capital improvements including renovations of many units and common areas. The apartments, all four-bedroom units, were being listed for $3,675.

Since the launch of Thor Residential in October 2013 with Alan Klein & Johnathan Fishman, Thor has closed on over $250,000,000 in real estate, including several purchases in Harlem.