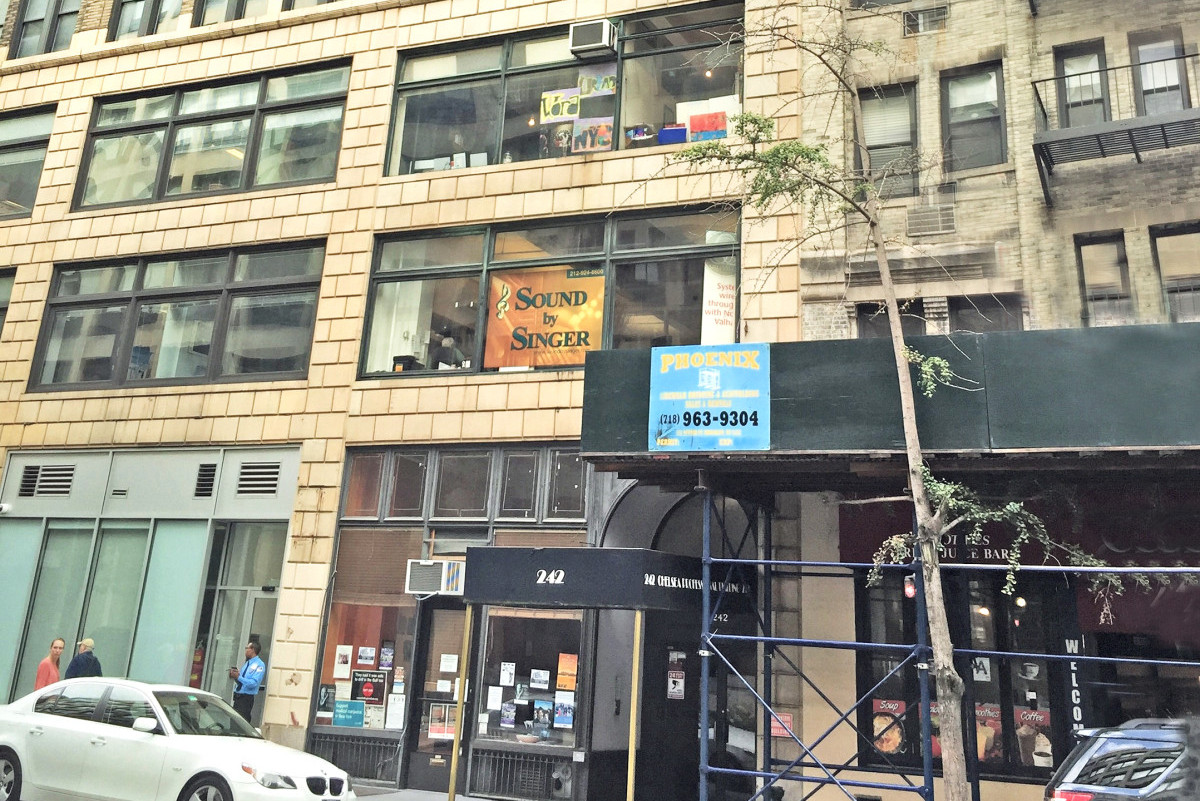 The property is located between Nassau and William Streets in Manhattan’s Financial District. The asking price is $40,000,000.

The site contains approximately 44.25 ft. of frontage along Beekman and is situated within a C6-4 zoning

district. It has a base residential FAR of 10.0, with a commercial FAR of 10.0. Additionally, ownership has purchased approximately 18,000 s/f of additional development rights from 47 Ann Street.

Eastern Consolidated has been selected as the exclusive broker to market a 18,000 gross square foot office building with ground floor commercial space at 242 West 27th Street on the campus of the Fashion Institute of Technology (FIT) in Chelsea.

The six-floor plus penthouse elevator building has been well-maintained under the same ownership for over 40 years. The first floor benefits from 16 feet ceilings, while the remaining above grade office floors have ceiling heights of 10 feet 6 inches.

“Additionally, the property’s prime Chelsea location at the center of the FIT campus would make it ideal for an owner-user looking for an office building in a vibrant, well-located area of Manhattan with superior security monitoring and transportation access.”

The campus spans five acres between Seventh and Eighth Avenues on either side of West 27th Street. Three residence halls on the southern side of the street accommodate over 1,250 students while the north side of the street houses the various classrooms and administrative offices.

A development site in Flushing has hit the market at $60 million.

“It would be ideal for either condos or apartment rentals along with large box commercial, perfect for national and credit retailers looking for the density and visibility this site has to offer,ˮsaid Preuss.

The 80,510 s/f site sits between Linden Place and Farrington Street. There has been a proposed zoning change to C2-2/R6 or C4-3, which would allow up to approximately 386,448 buildable square feet.

The asking price equates to around $160 per buildable square foot, a price Preuss calls “reasonable.ˮ

“This is an extremely favorable opportunity for a developer to take advantage of the desirable Flushing marketplace at a reasonable price per square foot,ˮadded Preuss.

The property, located on the corner of Amsterdam Avenue and West 113th Street the Upper West Side, is subject to a 99-year net lease signed by Stonehenge and SL Green in 2012 when they began converting the 20-story building into apartments.

The fee position has been bought by Fine Times Inc., a firm that has typically bought smaller rental buildings on the Upper West Side and in Brooklyn Heights, according to The Real Deal, which first reported the sale.

available in the marketplace, a fee position secured by a fully-renovated and well-operated luxury apartment building,ˮ said Cushman & Wakefield in a press release announcing the sale.

“Features of the lease include ongoing capital improvement requirements, well defined use and assignment provisions, and frequent and substantial escalations inclusive of regular fair market value resets. The sale price represented a 00.86% capitalization rate on the in-place rent at the time of sale.ˮ

“Long term investors were very excited by the rapid escalation of rent to the fee position over the course of the next 18 years followed by three substantial fair market resets at 25 year intervals,ˮ said Oster.

“The structure of the lease provides a rare investment vehicle with the safety of a long term bond and the potential yield of a value-add investment.”

The same Cushman & Wakefield team structured the lease on behalf of Mt. Sinai St. Luke’s in 2011-2012. The hospital will use the sale proceeds “to further enhance the quality health care services offered by and the comprehensive transformation of Mount Sinai St. Luke’s,” said according Arthur A. Gianelli, president.

The largest commercial real estate owner on Long Island, Rechler listed five of its properties there in January in a move to “capitalize on positive market trends.”

They announced on Monday that the plan netted a total of $36.5 million for the company.

100 Andrews Road in Hicksville was sold to Diamond Sugar Co., a food distributor from Brooklyn, NY.

The sale of the 167,754 s/f  property closed on October 16, 2015. Neil Dolgin and Jeffrey Unger of Kalmon Dolgin Affiliates Inc. represented the buyer.

Diamond Sugar Co., will occupy 100,000 s/f at the property, the balance being leased to a single tenant.

85 Engineers Road in Hauppauge was sold to Aladdin Packaging, which is expanding into the 41,954 s/f building that is contiguous with its corporate headquarters.

Aladdin will be using the vacant building as an additional factory and warehouse for its 45 year-old company. The deal closed in August 2015 with Richard Cohen of Ashlind Properties as the buyer’s representative.

The existing 41,784 s/f  multi-tenant building offers Motor Parkway frontage and access to the Long Island Expressway. Craig Padover, the principal of Malmar Associates, will be positioning the property for redevelopment in the near future.

The remaining two properties located in Suffolk County, totaling 125,000 s/f, are in contract and due to close this December and January 2016.

Silvershore Properties announced the $10.57 million purchase of a mixed-use apartment building with 39 rental apartments and five stores in Ridgewood, Queens.

This is the 108th building acquired by Silvershore principals Jason Silverstein and David Shorenstein since their first acquisition in 2010.

“This was a rare opportunity to acquire a very desirable asset in an excellent neighborhood,” said Silverstein. “Multi-family properties of this size, with 100 feet of retail frontage in Ridgewood, are hard to come by.”

Jeffrey Dunne and Steven Bardsley of CBRE’s Institutional Properties, closed on the $292 psf sale of 1290 Summer Street, the highest price per square foot ever paid for a Summer Street property.

1290 Summer Street is a 92 percent leased 41,153 s/f medical building that commands the highest medical rents in the Summer Street market.

With almost $3 million in recent renovations, 1290 Summer Street is one of the top tier medical buildings in Stamford and has attracted a mix of medical tenants.

“1290 Summer Street is strategically positioned between two of the major hospitals in the area, Stamford Hospital and Tully Medical Center,ˮ said Dunne.

“This high quality asset has attracted and retained diverse medical practices, which should provide stable income for years to come.”

New York-based developer JMH Development has closed on the acquisition of 8995 Collins Avenue, a waterfront re-development site in Surfside, Miami, for $55 million.

JMH plans to construct a luxury condo, similar its Three Hundred Collins project in the South of Fifth neighborhood.

“8995 Collins is one of the last remaining beachfront sites in Miami Beach and our first endeavor in Surfside,” said Jason Halpern, founder of JMH Development. “We have seen a void in smaller, truly high-end buildings in this market, and we are focused on developing more projects of this nature throughout Miami Beach.”