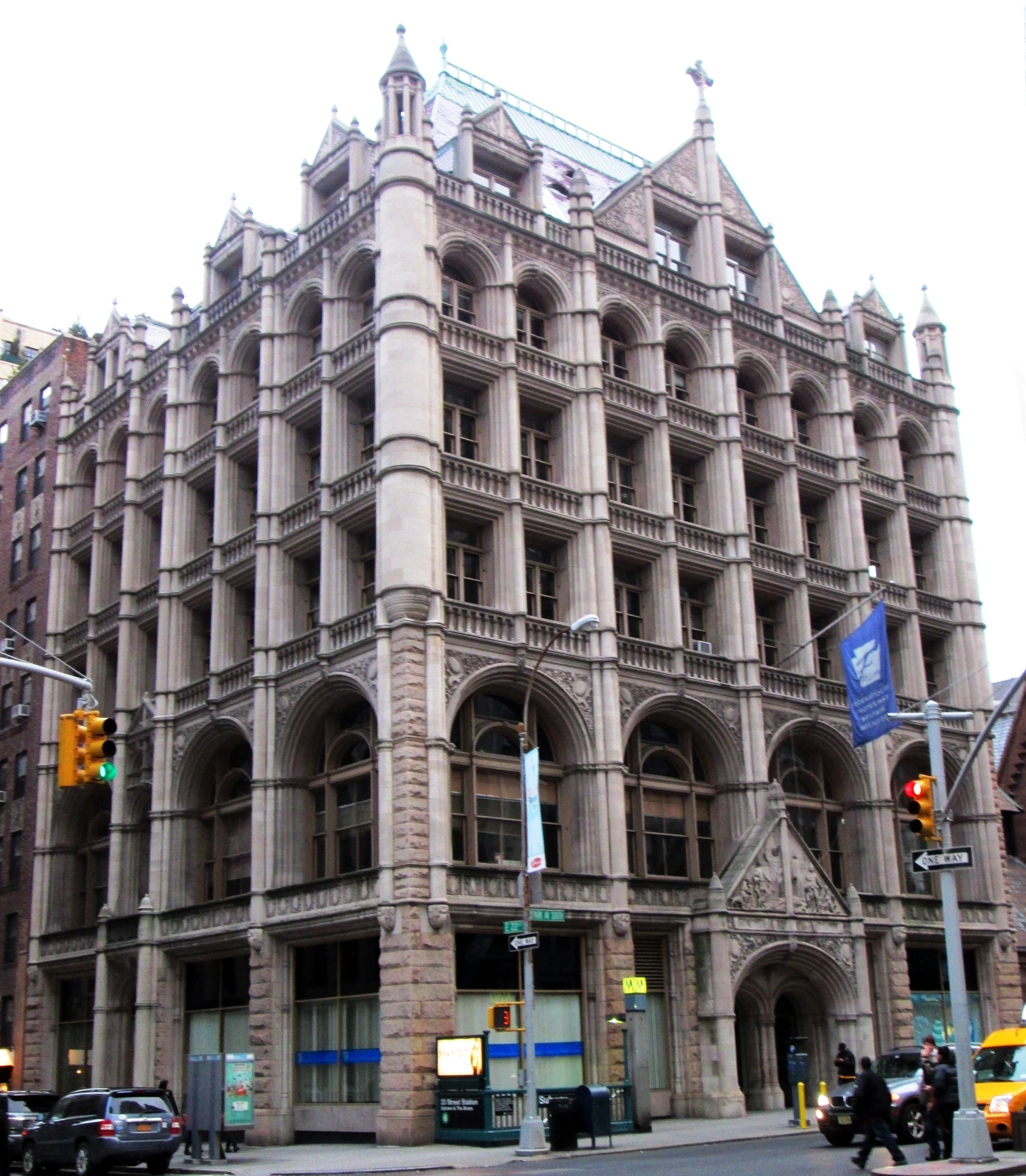 The Federation of Protestant Welfare Agencies (FPWA), located at 281 Park Avenue South, has placed its historic headquarters up for sale with a $50 million price tag.
“Selling the building provides a tremendous opportunity to reinvest in the organization in ways that will enhance our ability to tackle social issues that affect the poor and working poor, and to support our member agencies,” said CEO/executive director Jennifer Jones Austin.

FPWA purchased the six-story building in 1963 from the National Council of the Protestant Episcopal Church after the council moved uptown. It was the first permanent headquarters of FPWA and was designated a NYC landmark in 1979.

FPWA has retained John Ciraulo and Robert Shapiro of Massey Knakal and Howard Poretsky and Patrick Gardner of Studley to marekt the six-story building.
The brokers believe the steel-framed, with its lofts and high ceilings will catch the eye of tech and media companies.

“This property presents an ideal opportunity for a tech or media company’s flagship headquarters, an investor looking to capitalize on soaring office rents in a submarket with the nation’s lowest vacancy rate or for a developer looking to capitalize in the neighborhood’s booming residential condo market,” said Massey Knakal vice chairman, John F. Ciraulo.

In one of the largest multi-family transactions of the year so far, Eastern Consolidated has arranged for the sale of The Nash, a 25-story, 191-unit luxury apartment building located at 222 East 39th Street, for $126 million.

Following a full-scale renovation and repositioning of the property, a partnership, led by Atlas Capital, Rockpoint Group and The Procaccianti Group (TPG) sold the recently converted property to Lloyd Goldman of BLDG Management.

Brian Ezratty and Scott Ellard of Eastern Consolidated, exclusively represented the seller in the transaction, and Ezratty procured the buyer.
Atlas Capital, Rockpoint Group and TPG first acquired debt on what was then the Eastgate Tower Hotel in July 2012.

The partnership restructured the deal through a pre-packaged bankruptcy plan and completely repositioned the building.

They closed the hotel and completed a renovation, reconfiguring common spaces and turning the guest rooms into one-, two- and three-bedroom apartments, and upgrading the ground floor retail space, outdoor plaza and a garage with 100 parking spaces. A roof deck, fitness center and bike room were also added as part of the renovation.

The property emerged from bankruptcy in November 2012 with the renovation beginning early in 2013. The luxury rentals at The Nash began leasing in August 2013. The building is now approximately 70 percent leased.

Prior to the sale, Ezratty arranged a garage lease with Champion Parking — who operates more than 50 locations throughout Manhattan — which enhanced the asset’s overall value.

A legal team from Greenberg Traurig LLP, led by Rob Ivanhoe, David Bolen and Minnie Bellomo, were the seller’s attorneys in the transaction. Steven I. Holm and Andrew Kellner, of Levy, Holm, Pellegrino & Drath, LLP, were the buyer’s attorneys.

“The property is the largest floor plate to sell in Sunset Park within recent history and it sold for $2.7 million over the asking price,” said Nowak.

“The high demand for commercial space in Brooklyn is keeping rents on an upward trajectory and investors keen on capitalizing on this trend are driving prices and pushing past the usual geographical boundaries.”

“With short-term leases in place, 150 52nd St. gives the new owner the opportunity to add significant value over time by increasing the rent roll and capitalizing on the strong and steady growth in local commercial rents,” Nowak added.

By 2018, 90 percent of the building’s leased space will be available and all current leases and renewals will expire by 2021, allowing for the property to be redeveloped in the near-term.

HAP Investments is in contract to purchase another development site at 2211 Third Avenue, to be known as “HAP 10.” The purchase price is $13 million.
The site is on the corner of 3rd Avenue and East 121st Street in Manhattan’s East Harlem neighborhood.

“We are thrilled to have purchased this site in a prime East Harlem location. This 120,000 s/f site will enable us to construct a building which we are certain will have major positive impact in further transforming this part of the East Harlem neighborhood,” said Eran Polack, CEO, HAP Investments.

“This represents one of the largest sales transactions to occur in Westchester County in the recent past,” said Massey Knakal’s Thomas A. Donovan, who exclusively handled this transaction.

“There is tremendous growth potential for this neighborhood, which is highlighted by the development of an approximately 250,000 square foot retail center nearby.”

The 220-unit, multi-family property was acquired for a purchase price of approximately $37.7 million.

The 94 percent leased property was acquired from AEW Capital Management and Corcoran. Mack-Cali’s Roseland subsidiary will manage and lease the property. Plans include upgrades to the apartments, a refurbished pool deck, as well expansion of the property’s amenities.

● Rosewood Realty
Last but not least

The property was the last of a nine-building beachfront portfolio in South Brooklyn that hit the market in January 2013.

The other eight buildings, which included Manhattan Beach Estates, sold for $78 million earlier in the year.

2835-2875 Ocean Avenue sold for 12.5 times the current rent roll, according to Jungreis, who added, “The building was a great investment for the buyer because the rents are low, the neighborhood is very strong and the owner has consistently maintained the buildings”

After navigating the bankruptcy and the foreclosure process, MRC acquired the property title at auction in July 2011. The company then executed an aggressive renovation and repositioning plan within the 55,000 s/f, 65-unit property.

Aaron Jungreiss of Rosewood Realty Group represented both the buyer and seller in this transaction.

The portfolio consists of adjacent properties on Washington, Newark and Court Streets in a section of Hoboken four blocks from the PATH station. The retail tenants include Verizon Wireless and the apartments were converted to condominiums and several of them were recently gut-renovated.

According to Davidovic, “Given the demand for properties in Hoboken, the close proximity of the portfolio to the PATH station and lower Manhattan, there was extraordinary interest from a variety of investors. We achieved 96% of the asking price.”

Massey Knakal Realty Services has been retained to sell a residential development site at 635 4th Avenue in Brooklyn’s Greenwood Heights neighborhood. The asking price is $24,500,000.

The subject property is an 89,500 buildable square foot site with 200 feet of frontage. It will be delivered with DOB approved plans for 91 residential units, 6,300 s/f of retail and 1,400 s/f of community facility space. 18 units are allocated to affordable housing, which qualifies the future development for a fixed tax abatement.

Michael Amirkhanian is marketing this property with Aaron Warkov.