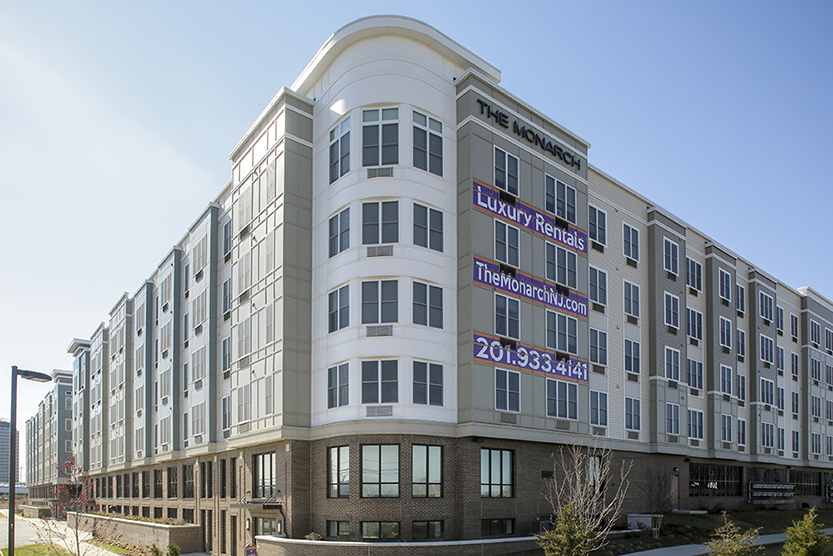 Holliday Fenoglio Fowler closed the $91.5 million sale of The Monarch, a 316-unit, luxury apartment community located across from MetLife Stadium and the in-development American Dream mall in New Jerseyʼs Meadowlands.

HFF marketed the property exclusively on behalf of the seller, a partnership between a New Jersey-based developer and an institutional owner.

The property was developed by BNE Real Estate Group. The buyer was an unidentified “private group.ˮ
The Monarch is situated on 15.8 acres at 100-120 Schindler in East Rutherford, New Jersey.

Located just off Route 3, the six-story property was completed in 2014 and is 97 percent leased, according to a press release.

Residents are also offered shuttle service to Secaucus Junction, which provides train service into Manhattan and the surrounding area.

A commercial building at 73 Hudson Street in TriBeCa has been sold for $15.15 million.

The five-story building contains 11,500 s/f as-built and offers 2,800 s/f of unused development rights. The building, which runs block-through from Staple Street to Hudson Street, is comprised of a retail unit on the ground floor and four floorthrough units above, which were delivered vacant upon sale.
The sale price equates to approximately $1,315 per square foot.

“73 Hudson Street generated tremendous interest from a range of investors and developers given the scarcity of condo conversion opportunities in Tribeca, especially with the location and the upper floors being delivered vacant,” said Suarez.

“This represents the second Tribeca acquisition for the buyer, a Spanish investment group, and suggests that the appetite for Manhattan assets from international buyers remains strong.”

Ariel Property Advisors has closed on the sale of a package of multifamily buildings located in Northern Manhattan and Brooklyn.

The sale included the Lenox Avenue Portfolio, a package of three contiguous mixed-use walk-up buildings on the corner of West 138th Street and Lenox Avenue in Central Harlem. It has 54 apartments and seven retail units, encompassing a total of 59,835 gross square feet;

“Due to its inherent downside protection and long term value potential, we continue to see an increased appetite for properties encumbered by restrictive agreements,” said Sozio.

All properties are encumbered by regulatory agreements with city agencies until 2023 and 2024.

CPEX Real Estate announced the sale of a three-building portfolio in Flatbush, Brooklyn.
The three buildings are 2810 Foster Avenue, 175 Lott Street, and 4202 Church Avenue. The portfolio is comprised of 67 rent stabilized apartments and five retail storefronts. The aggregate sale price was $12,050,000 or $208 psf.

“Our sale of the Flatbush Portfolio at a 4.58 percent Cap Rate emphasizes the continued demand to purchase rent stabilized multi-family assets and further supports the strength and stability of the Brooklyn multi-family market” said Safina.

“The property is a fully rent-stabilized building with a J-51 (apartment renovation) tax abatement that expires next year,” said Seth Glasser who, along with Peter Von der Ahe, Joe Koicim and Rafi Moskowitz, represented the seller and procured the buyer.

“Apartment rents in the building are up to 60 percent below market rate and even more value can be created through increased utilization of the retail space,” Glasser added.

CITICORE announced it has been exclusively retained to sell 7 West Burnside Avenue in the Bronx for $22 million.

The building is located on the corner of Jerome and West Burnside Avenue in the University Heights neighborhood.

The three-story commercial elevator office property — which has not been sold for 43 years — has four stores with AAA retail tenants.

The 38,026 s/f building is close to the subway and has heavy foot traffic in the neighborhood, according to Citicore’s managing partner Timour A. Shafran who is handling the assignment.

Cushman & Wakefield has been retained on an exclusive basis to sell 315 West 102nd Street, a multi-family building on the Upper West Side.

The property has been owned by West End Manor, LLC for multiple generations and is on the market for the first time in over 60 years. The listing is priced at $23.5 million.

“If I were asked to describe the attributes of a dream New York City multi-family asset under $30 million dollars, it would literally be 315 West 102nd Street,” said Cushman & Wakefield’s Paul Smadbeck, who is exclusively marketing the offering with Hall Oster, Robert Stufano, and Teddy Galligan.

The nine-story, elevator-serviced building contains approximately 36,252 s/f and sits on a 55 by 100.92 ft. lot. It is comprised of 36 apartments and a super’s unit in the basement. Of the 36, 18 are freemarket, 16 are rent stabilized and two are rent-controlled. Layouts consist of 18 one-bedrooms and 18 two-bedrooms.

All free-market units and both passenger and freight elevators have recently been renovated.
The building also features a sleek lobby and over ten-foot ceiling heights throughout.

The team was also responsible for procuring the buyer, TFS Investment Group, directed by Avrohom Schlaff out of New York, who acquired the property as part of a 1031 exchange.

According to Dunne, significant upside exists through re-leasing the current 23,942 s/f vacancy as well as additional development potential on the adjacent 2.4 acre parcel, which includes a purchase option.

Dunne commented: “Mid Hudson Center will provide the buyer with a strong in-place yield with the ability to add value through lease-up and additional development at the property. Combined with its easily accessible location on Route 9 directly across from Marist College, Mid Hudson Center was an ideal property to satisfy the buyer’s 1031 exchange.”

Meridian Investment Sales has been exclusively retained to sell a multifamily property located in Chelsea.

The Clarke, located at 222-224 West 21st Street, is composed of two contiguous multifamily walk-up buildings, consisting of 27 apartments totaling 20,120 s/f and close public transportation. The property has been completely renovated.

“Everyone boasts about pristine, turnkey condition multifamily assets but very few support those lofty adjectives,” Schechtman explained. “Properties like The Clarke are rarely available and offer investors stable in-place net operating income in an area that continues to perform with no signs of slowing down.”

The RADCO Companies completed its ninth acquisition of 2016 with the closing of the Reserve at Ashley River apartments in Charleston, South Carolina.

The purchase price for Greenwood at Ashley River was $12.5 million, and RADCO plans to spend upwards of $3.4 million to modernize and upgrade the well-located community.