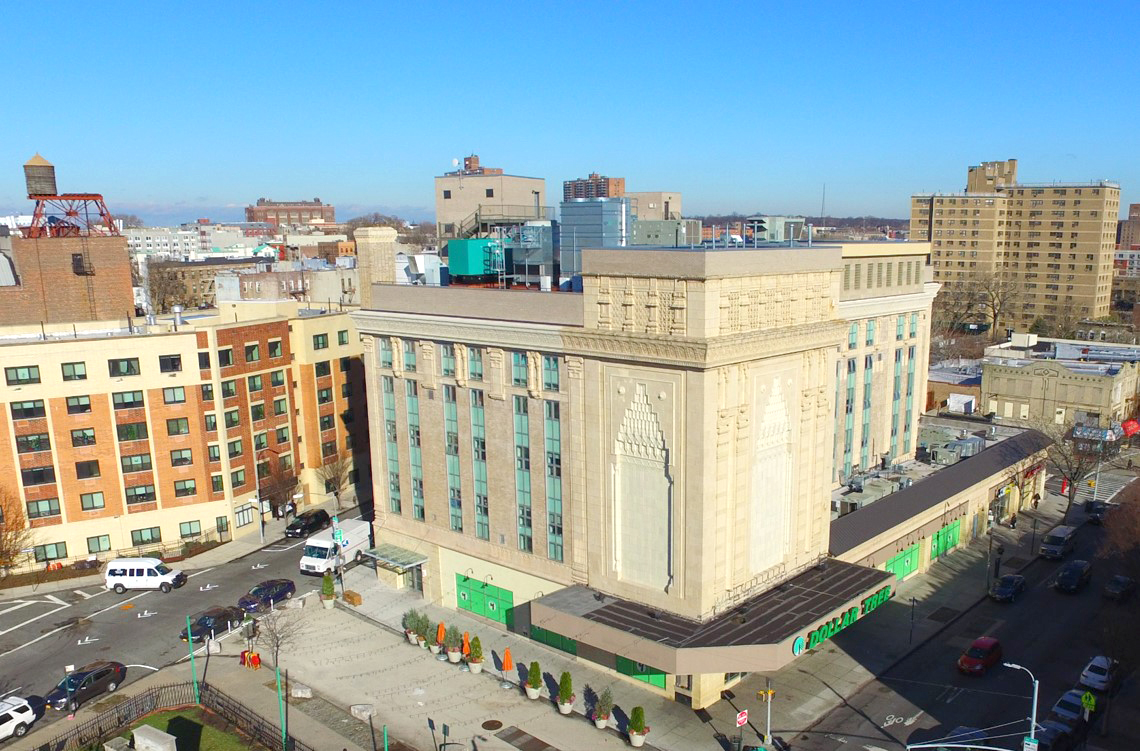 POKO partners sold the build after spending millions bringing it back to life and leasing it ot the Ascend Public Charter School.
TerraCRG’s Ofer Cohen, Dan Marks, Matt Cosentino, Fred Bijou and Eric Satanovsky brokered the sale of the property at 1501 Pitkin Avenue.

“1501 Pitkin Avenue is a true Brooklyn comeback story,” said Cosentino. “After many years of vacancy and neglect, the seller, POKO partners, brought life back to this majestic property by building an incredible education facility that serves almost 1,000 public school students.”

Herman, a Brooklyn investor who controls the entities Pitkin Terrace LLC and Herman Holdings LLC, plans to keep the property largely as is, according to TRD.

The approximately 165,000 s/f building underwent a full interior restoration project and was transformed into a mixed-use, retail and education facility.

Currently, the building is occupied by three national tenants on the ground floor – Pizza Hut, Subway and Dollar Tree – and Ascend Charter School throughout the remainder of the building.

In its heyday, The Pitkin had an almost 3,000-person capacity and some of the great performers of the day such as Milton Berle, Humphrey Bogart and Jackie Gleason appeared there.

Assa Properties has completed the $50 million sale of 19 West 55th Street, a mixed-use retail and residential building in Midtown.
Abraham Leifer of Aview Equities purchased the property, which was formerly part of a two-building portfolio including the adjacent 15 West 55th Street, which Assa will retain.

Assa acquired the portfolio for $60 million in 2013 and has since implemented a major revitalization program.

“Since we purchased this portfolio, Assa Properties has made the investment to bring the properties to their current first-class state, matching the premium location in the center of Fifth Avenue’s luxury retail corridor,” said Solly Assa, founder of Assa Properties.

Assa Properties completed an $18 million renovation of the portfolio which included the repositioning of the retail space into multi-level retail suites, including a 14,900 s/f lease to Domenico Vacca at 15 West 55th Street, a renovation of the residential units and upgrade of the common spaces and building systems.

The portfolio is now at near-full occupancy, according to Assa.

Avalon Bay Communities has sold a 246-apartment community in Milford, Connecticut, to an affiliate of the DSF Grou, for $50.5 million.

CBREʼs Jeffrey Dunne and Gene Pride along with Simon Butler and Biria St. John of CBRE New England represented the seller.
Dunne commented: “The property offers a terrific value add opportunity given its 2004 construction. The interest in this offering was extremely strong, we received double digit offers to purchase the property, demonstrating the significant capital in the market seeking to acquire well located, institutional quality apartment communities.”

Butler added, “DSF should do very well with this asset as they implement their signature Halstead brand. DSF plans to renovate the common area amenity spaces and to rebrand the asset as Halstead Milford.

“The demand for luxury apartments in this part of Connecticut remains very high as the location is convenient to major employers in New Haven, Norwalk and Stamford while also near amenities such as retailers along the Post Rd. and recreation on Long Island Sound.”

“This acquisition aligns perfectly with our strategy of purchasing well located multifamily assets that we can add value to with our amenity renovation and rebranding program,” added Josh Solomon, president of the DSF Group.

The Long Island City office of CBRE with Manhattan-based Pantheon Properties, arranged the $25.6 million sale of 1300 Viele Avenue and 1301 Ryawa Avenue in the Bronx to a joint venture between MRP Realty and AEW Capital Management.

John Reinertsen, a senior vice president with CBRE, along with Matt Corpuel and Gary Capetta of Pantheon Properties, represented the seller, TCW Leasing Company, in the marketing of the assets and negotiated the sale transaction.

The new ownership has already begun a $5 million capital improvement campaign at the complex, which is located close to the Hunts Point Food co-op where over 80 percent of all produce, meat and fish enter New York City.

“Given the rebirth of the Hunts Point area over the past few years, both distribution space users, as well as investors saw the benefits and opportunities of owning such a well-located property and MRP and AEW was able to execute a deal quickly with the seller,” noted Reinertsen.

“We see a lot of potential in the complex by food corporations and just-in-time distributors as well as movie and television production companies,” added Capetta

W Brothers Realty has closed on the purchase of a Flushing apartment building for $14.175 million.

W Brothers was founded by Bruce and Norman Weisfeld. They were part of a Joint Venture that bought the Neumann Leathers factory in Hoboken, NJ, in 2014 to convert it into a residential and retail complex.

Urban American purchased the Flushing building for $8.11 million in 2013.

HUBBNYC has scooped up an East Village apartment package for $14.25 million.

Ferrara represented both the seller, Allen Park, and the buyer.

“The seller required a year-end closing,” said Ferrara. “HUBBNYC moved quickly to sign a hard contract and close all cash in two weeks. The seller had been managing his buildings since 1980 and was at an age where he wanted to cash out and retire.“

The two-building package has 50 ft. of frontage on 1st Avenue and consists of 14,900s/f. The two, five-story walkups have a total of three retail spaces and 16 apartments.

EPIC Commercial Realty has been retained to broker the sale of 2151-2155 Ocean Avenue, an elevator multi-family building in Midwood/Madison, Brooklyn.

There are 24 apartments, two medical offices, 10 parking spots and a laundry unit. 2155 Ocean Avenue is a condo building. There is a 421A tax abatement for each lot that expires in June 2027.

Long Island-based BRT Apartments Corp. has entered into a contract to sell The Fountains Apartments, a 542-unit property in Palm Beach Gardens, Florida, for approximately $97.3 million.

The sale is expected to close in the second quarter of fiscal 2018. BRT estimates that its share of the gain on this sale, net of its share of mortgage prepayment charges, will be approximately $20.5 million.

“We anticipate that in the short-term, we will be able to recycle the proceeds from this sale into accretive acquisition opportunities,” commented Jeffrey A. Gould, chief executive officer and president of BRT.

“42-31 Bell Boulevard presented the buyer with an exceptional opportunity to acquire a fully-leased, zero maintenance property,” said Nelson “The property is located in a prime retail destination in Queens and offers the potential for significant expansion.”

The 10,092 s/f building is currently split into three, fully-leased units. Bank of America ios the anchor with a 5,376 s/f corner leased through March 2024.

The remaining units are occupied by a dog daycare and a restaurant, with leases through October 2019 and April 2024 respectively. The building has a 20-space parking lot.

It was purchased by Hersel Sonobolian.