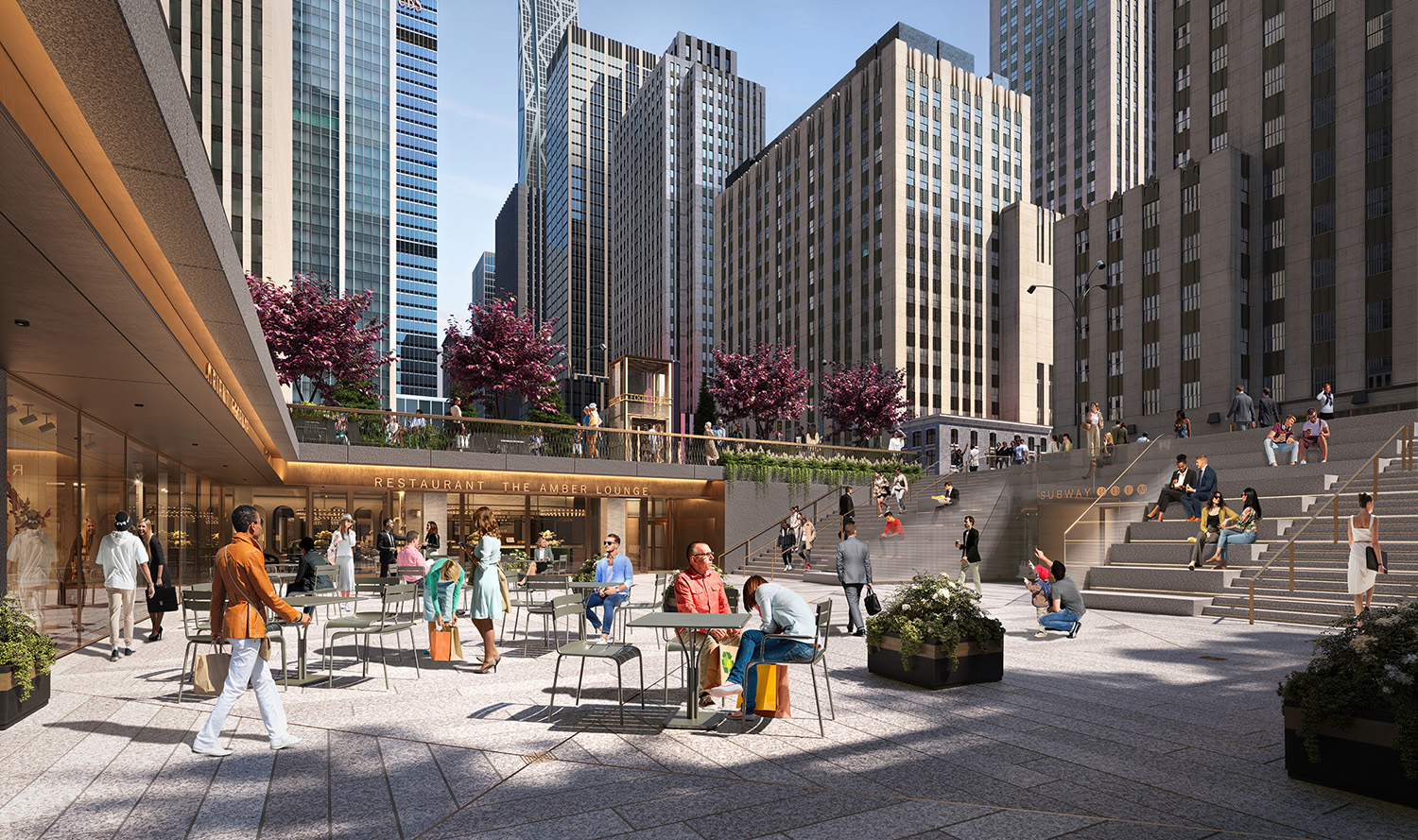 Rockefeller Group today announced substantial progress on the $50 million renovation of its privately-owned public plaza at 1221 Avenue of the Americas. The block long tree-lined plaza will serve as the gateway to one of Manhattan’s largest retail spaces.  Completion is expected ahead of the 2022 holiday season.

The plaza fronts the west side of Avenue of the Americas between 48th and 49th Streets, one block south of Radio City Music Hall.  The building’s available retail space, accessible from the plaza, totals 65,000 square feet.  The plaza also provides in-building access to the Rockefeller Center subway concourse and is connected to an additional 21 million square feet of class-A office space in neighboring buildings.

For the first time in 50 years the retail space that originally housed the McGraw-Hill bookstore and the New York Experience Theatre is available for lease simultaneously, paving the way for the plaza redesign and immersive flagship retail opportunity.

The retail space offers rare branding or experiential opportunities in the city’s preeminent neighborhood for both business and tourism. The property, at 2.6 million square feet, is one of the largest office properties within the Rockefeller Center-Sixth Avenue Corridor, New York’s largest class-A office market and one of its fastest-growing hospitality locations.

“New York City needs our business districts, and we need to be prepared to grow, evolve, and change in order to remain competitive,” said Mayor Eric Adams. “Reimagining our central business districts will be an all-hands-on-deck effort, one that will require investments not just in the buildings but also in the neighborhood as a whole. I applaud the Rockefeller Group for being model New Yorkers and taking action to improve the neighborhood, and I look forward to working with them and others to ensure that Midtown remains a destination for New Yorkers and visitors alike.”

“From a retail perspective, since this building was first developed, the Avenue of the Americas has completely changed for the public from a corporate corridor to a pathway between Bryant Park and Central Park, Fifth Avenue and Times Square,” said Bill Edwards, Rockefeller Group’s executive vice president of Core Holdings.  “Space that was once designed for corporations has been adapted for new uses and we’re thrilled to have this blank canvas for innovative brands to explore and the public to enjoy.”

“It’s hard to imagine a comparable retail opportunity in North America, which offers such a strong backdrop to display a brand on the world’s stage,” said Eric Gelber, an Executive Vice President for CBRE who is leading the marketing and leasing effort for the retail space.  “Aside from the appeal of the neighborhood, the building itself attracts a wide range of populations – from daytime office workers to locals and tourists.  It’s a saturated cross-section difficult to find anywhere else in New York City.”

Plans for the plaza aim to transform underutilized outdoor space into a more open, inviting and accessible public space with an expansive pedestrian area at street level.  The plaza is envisioned to be a new meeting place in Midtown, with the street level and concourse plaza connected by a large staircase with stadium seating for office workers and visitors to enjoy the open air and views of landmark towers throughout the day.