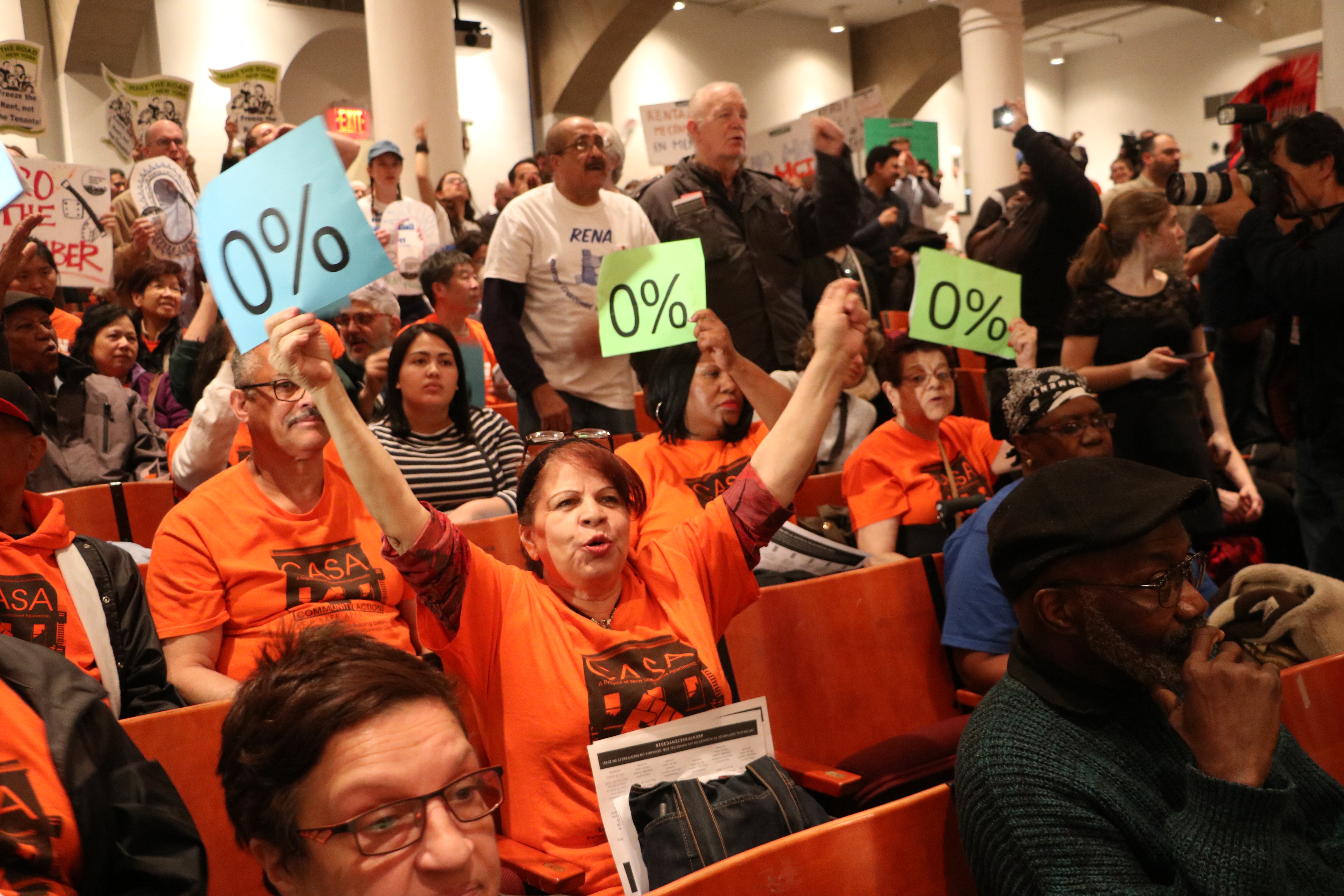 The possibility of a rent freeze was quashed last Thursday at the Rent Guidelines Board’s preliminary vote, held at Cooper Union’s Great Hall.

Tenant representatives Sheila Garcia and newly-appointed Leah Goodridge offered a proposal that would have included a rent freeze for one-year and two-year lease renewals but the chair, the board’s four public members and the two owner members voted against the measure.

The owner representatives attempted to offer their own proposal but were shouted down by tenants who started chanting and yelling once the proposal for a rent freeze failed.

Roberts read her proposal and held a vote amidst the yelling and the board walked off the stage with most tenants in the crowd unaware that anything had been decided.

The chair’s proposal passed in a vote of five to four, with the owner and tenant representatives voting against the measure and the public members and chair voting for it. Prior to the vote at the end of the meeting, Garcia made the case for a third rent freeze for tenants.

“We want business to be profitable for landlords but not at the cost of tenants,” she said. “We haven’t seen any data that says landlords overall are struggling. This isn’t based on, ‘Let’s feel bad for tenants.’ It’s based on data. We’ve seen over and over that tenants are still struggling and landlords are not.”

The New York Post reported prior to the vote that the Rent Stabilization Association, an organization that represents 25,000 landlords, was planning to ask for four percent increases on one-year leases and a seven percent increase on two-year leases.

Tenant representative Sheila Garcia said after the vote that if the owners had opted to offer their own proposal, it would have reflected the increases proposed by the RSA, as this was what was in their testimony to the RGB last week.

At last year’s preliminary vote, owners asked for four and six percent increases. The board ultimately approved 1.25 percent and two percent hikes for one and two-year leases respectively after two years of a rent freeze on one-year leases.

Garcia and then-tenant rep (now Assembly member-elect) Harvey Epstein requested a rent rollback at last year’s preliminary vote for tenants living in buildings where owners increased the rent through other means, such as with major capital improvement increases or improvements to individual apartments, while requesting a range of zero to two percent for tenants in other buildings.

In previous years, the tenant reps have pushed hard for a rent rollback with tenant rallying cries reflecting that message. Garcia said that this year, however, the focus was on getting another rent freeze rather than a rollback.

“We previously got two rent freezes but the data this year didn’t merit a rollback,” she said. “Our message was to get a rent freeze.”

Stuyvesant Town-Peter Cooper Village Tenants Association president Susan Steinberg said at this year’s preliminary vote that she would love a rollback, but was sure it would never happen. Prior to the vote, she was more optimistic that another rent freeze might be a possibility.

“People are paying 30 to 50 percent of their income in rent and landlord income has gone up a phenomenal amount,” she said.

“My income hasn’t gone up that much and my expenses have increased. They really need to rectify the horrendous increases from the Great Recession.”

The increases approved at the final vote on June 26 will apply to leases signed between October 1, 2018 and September 30, 2019.

Tenants will be able to offer public testimony at Cooper Union’s Great Hall on June
19 and at other locations throughout that month.