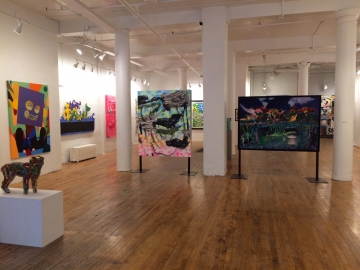 The high end art gallery, which features projects by museum-level contemporary artists, will relocate from temporary showroom space on 26th Street to the ground floor of 86 Gansevoort Street – a mixed-use residential property, also known as 95 Horatio Street – pending build out of the space.

“Allouche Gallery is an ideal addition to our Gansevoort Street property and this neighborhood,” said Steve N. Gonzalez, director of retail leasing for TF Cornerstone.

“Allouche’s long-term commitment at 86 Gansevoort Street will benefit the flourishing community here and serve art enthusiasts throughout New York City and beyond.”

“The gallery owners were attracted to 90 Gansevoort’s proximity to the Whitney Museum of American Art, as well as the High Line and such neighborhood standouts as The Standard, Catch and Santina,” said Harroch.

“The relocation of the Whitney Museum to the Meatpacking District was a significant turning point for the market’s retail landscape,” said Bellantoni.

“This is a really unique location with some of the highest visibility in the District today due to the overwhelming success of the Whitney. We were seeking a special tenant that would continue to evolve the Gansevoort Street corridor and add to the live/work/play environment of the District. We’re certain that Allouche will be a great addition to the market.”

Bertwood Realty announced the signing of a 1,500 s/f lease for the French cookie maker, Michel et Augustin at 98 4th Street in Brooklyn.

Michel et Augustin entered the U.S. market with a splash, landing Starbucks as a client earlier this year.

With over 400 wholesale accounts now in the country, Michel et Augustin looks poised to become a major player in the cookie sector.

Bertand de Soultrait, president of Bertwood Realty, first spotted the baker himself during a visit to France.

“They have a great reputation for quality and great taste, plus their playful approach to marketing is infectious,” said de Soultrait.

The space in Brooklyn will be used as a base to co-ordinate wholesale sales and marketing.

“We had many requests for the space from juice and coffee bars, but since the site was restricted to dry use only, these businesses were unacceptable,” Famularo said.

“With Blo Blow Dry Bar, we found the perfect tenant for the building and an ideal space for the franchisee. ”

Because the company features a low-cost, turnkey franchise system, the space at 142 East 49th Street can be renovated quickly, Famularo said.

Other Blo Blow Dry Bar sites in New York City are located at 800 6th avenue in Chelsea, and 325 East 64th Street and 260 East 72nd Street on the Upper East Side.

In June 2014, Paltrow announced that she and her longtime hairdresser, David Babaii, would be partnering with the franchise to offer creative advice.

With 60+ locations in the U.S., Canada, the UK, and Philippines, Blo Blow Dry Bar offers a wash and blow dry from seven signature styles in the Blo Look Book for around $40.

Adam Malitz, associate of Lee & Associates NYC LLC has arranged a lease for the restaurant’s first Brooklyn location at 229 Flatbush Avenue, between Bergen and Dean Streets in Park Slope.

Known as New York City’s go-to spot for authentic Philly cheesesteaks, the restaurant will take a 1,048 s/f space up the street from Barclays Center.

Parm has signed a lease down the street, and other neighboring businesses include Patsy’s, Shake Shack, and Doughnut Plant.

“Between the central location and strong sense of community, this is the perfect place for Shorty’s to make its Brooklyn debut,” said Malitz, who represented Pintchik Associates Ltd., the owner, and the tenant.

The tenant has taken possession and plans to open in the winter of 2016. It will be Shorty’s fifth New York City location.

RKF and Isaacs and Company arranged a new lease for Aquazzura at 935 Madison Avenue on the Upper East Side.

This will be the luxury shoe retailer’s first standalone location in the United States.

Aquazzura will sit at the base of the former Whitney Townhouses, brownstones that have been completely redeveloped into luxury boutique condominiums, and directly next door to the new The Met Breuer.

“Aquazzura will complement other luxury retailers in the area and contribute to the high-end co-tenancy we’re seeking for these prime spaces on Madison Avenue.”

RKF and Isaacs and Company continue to market an additional 9,123 s/f of ground floor and lower level retail space at 935 Madison Avenue.

New Street Realty Advisors announced that Wells Fargo Bank, N.A. has entered in a new, long-term lease for its existing 3,000 s/f branch at 143 Lenox Avenue, in the mixed-use development known as Lenox Gardens.

The retail space is located on the Northwest corner of Broadway at 53rd Street, adjacent from the Ed Sullivan Theatre, home to The Late Show with Stephen Colbert.

La Panineria will take occupancy immediately and plans to start serving its’ customers in time for the holiday season.

La Panineria, with one popular location at 1 West 8th Street in Greenwich Village, was eager to enter the dense Midtown West neighborhood as the site sits just one block from both The Jacob K. Javitz Convention Center as well as Hudson Yards development.

Jamie Schwartz represented the tenant. John Manous of Houlihan-Parnes Realtors represented the owner The space was formally a Radio Shack that had occupied the storefront for over 25 years.

According to Schwartz, “The space was not on the market at the time of our search, and we were able to negotiate a deal for the space prior to Radio Shack rejecting the lease in its bankruptcy proceeding and vacating the space. It’s one of the prime storefront locations on Mamaroneck Avenue in the central business district, near many other national and regional banks.”

Ibiza Kidz, a children’s shop for shoes, clothing and toys located in Union Square, has expanded to open a second location in Stuyvesant Town.

The new store, is owned by Stuy Town resident Carole and Johnny Husiak.

Rose Associates negotiated the long-term 1,800 s/f lease at 340 First Avenue, between 19th and 20th Streets. The space was most recently home to a RadioShack.

Bruce Spiegel of Rose Associates represented the tenant and owner on the deal, He said CompassRock, the managing agent for Stuy Town, had been seeking out a family-oriented business. He reached out to Ibiza Kidz, knowing the company’s background.

“We thought they would be a great tenant to add to the mix there,” Spiegel said. “I’m sure they’re going to be very successful.”

The new restaurant and the recent grand opening of a 23,000 s/f T.J.Maxx store enhance the tenant mix at the fully leased, 340,000 s/f Middlesex County shopping center, according to Levin Management, the property’s exclusive leasing and managing agent.

IP Associates, a partnership between JJ Operating Inc. and Houlihan Parnes, acquired the property late last year through a foreclosure sale. They  plan to spend $5 million to reinvigorate the shopping center,.

Regal Cinemas was represented in the transaction by William Farkas of Jeffrey Realty Group.