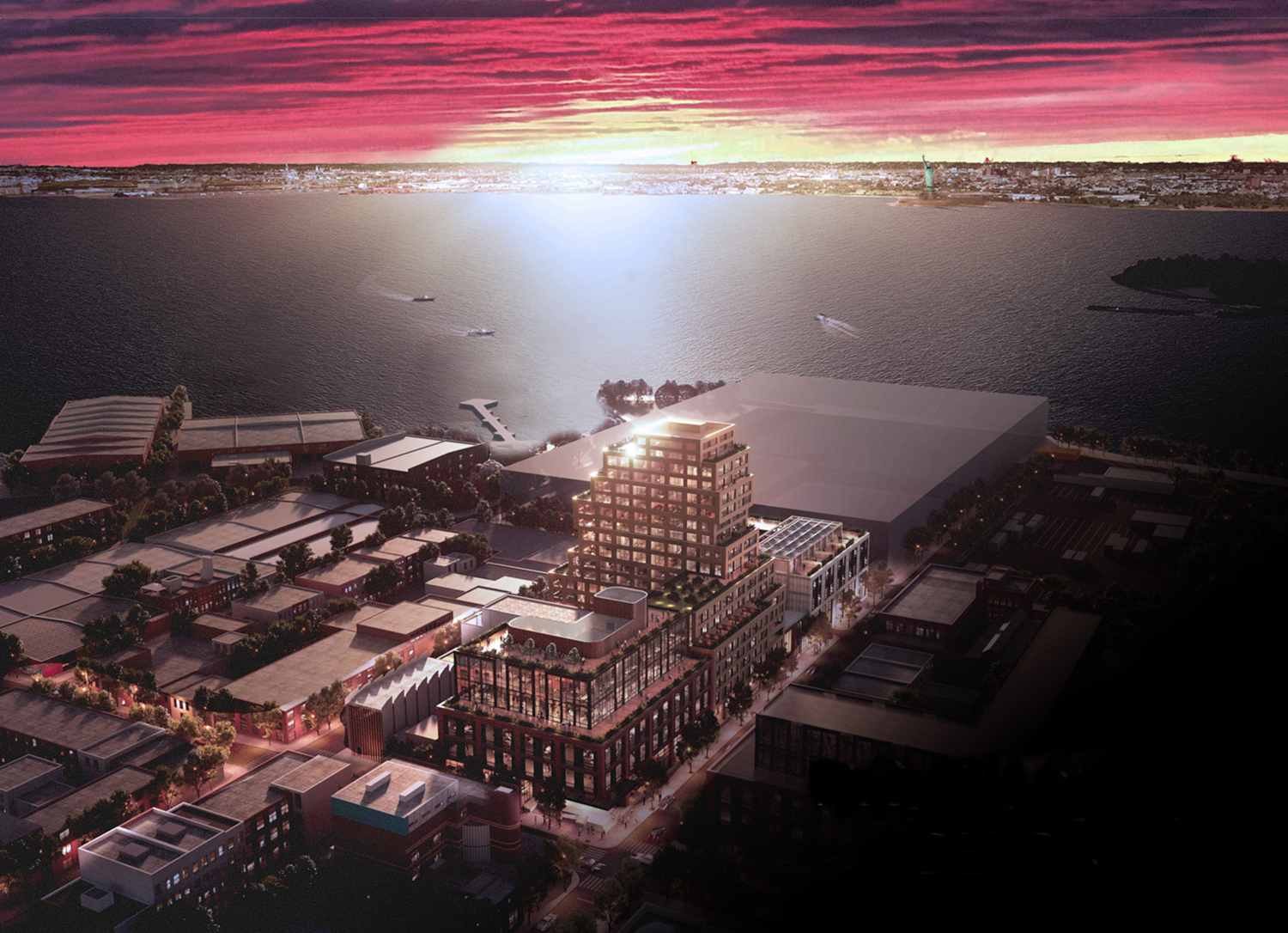 Alexandros Washburn, the former chief planner for the City of New York who now leads Brooklyn-based design firm DRAW Brooklyn, has unveiled a plan to build a mixed used housing and manufacturing development in Red Hook.

Called the Model Block, the plan aims to transform a vacant warehouse at 145 Wolcott Street into a 210-unit apartment complex with 65,675 s/f of light manufacturing space and 74,325 s/f of commercial space including restaurant, shops, maker space and creative office space.

Washburn has partnered with Washington D.C.-based development firm Four Points, LLC on the project. He also worked with architects Arquitectonica, AE Superlab and Marpillero Pollak Architects on the design, which he has already shown to hundreds of local residents and community groups as part of an ambitious outreach to secure support.

The team used new technology to give Red Hook Houses residents an opportunity to tour the site with augmented reality goggles so they could see what the development would look like and used their feedback to tweak the designs.

According to Washburn, the result is a design that creates a thriving neighborhood hub that delivers on the core elements of housing, jobs, environmental cleanup and resilience long identified by community members as local priorities while providing an alternative to a wave of last mile warehouses rising in Red Hook.

“This is a site my neighbors and others from across Red Hook have discussed for years – often at community planning sessions on the ground floor of my house on Van Brunt Street,” said Washburn. “The Model Block is the direct result of those conversations.

“We asked our neighbors: what do we need in Red Hook? What do we love about Red Hook? And how can we get it all in a model block? The top priorities that emerged were clear: housing, jobs, resilience and the environment. And the process was clear: doing it in a way that was shaped and led by the community.

“We are thrilled to unveil this proposal, and we’re looking forward to continuing those conversations with our friends and neighbors.”

The Model Block would create Red Hook’s largest new mixed income housing in decades: 61 affordable apartments in a 160,000 s/f building with 210 overall apartments. At its highest point, the building would have 14 stories of apartments: the same number of stories as the tallest residential building in Red Hook, 135 Richards Street/80 Dwight Street within the Red Hook Houses.

It would also create more than 337 jobs in an ecosystem of companies, including art manufacturing, restaurant, retail and office space.

According to Washburn, the development plan evolved in the aftermath of Hurricane Sandy when he began talking to his neighbors. “It was in the tough weeks and months after Sandy that we said, ‘something needs to change’,” said the designer, “so we worked with our neighbors to envision a solution.”

Increasing housing stock for a range of income levels and the number of good jobs in the neighborhood have been a longstanding local priority, formalized when a community-driven process led to the creation of the Red Hook: A Plan for Community Regeneration, also known as the 197-a Plan, adopted by Community Board 6, passed by the Planning Commission and ratified by the City Council in 1997. The 197-a revitalization plan centered around more inclusive housing opportunities, and growth and support for local artists.

The Model Block, on the other hand, constitutes the neighborhood’s largest addition of income-restricted housing since the creation of the Red Hook Houses themselves, in 1939.

Red Hook residents and Community Board 6 residents would be given preference in the lottery for half of the affordable apartments, enabling many who grew up in Red Hook to stay there.

The plan also includes rigorous site remediation in coordination with the New York State departments of Environmental Conservation and Health through the Brownfields Cleanup Program.

The Model Block has entered the New York Board of Standards and Appeals public review process for a variance to allow a range of uses in character with the neighborhood and community benefits.

The BSA process includes opportunities for public consultation and comment, including a meeting of Community Board 6 and a BSA public hearing.

The development team hopes to complete the BSA process by the fall of 2021 and start construction in 2022 with completion expected in 2024.

“We welcome development that meets our needs of housing, job creation, resiliency, including social justice and cultural access for all. The Model Block is exactly the type of project we have envisioned for Red Hook. We welcome this inclusive vision for a former unused industrial site with its potential as an urban planning model for more cities rethinking their future.”

“RHI is looking forward to supporting the power of young people to share their voice about changes and development coming to Red Hook and chart out a path that has a positive impact in their community,” added Morgan Monaco, Executive Director, Red Hook Initiative.

“We don’t just want a Model Block, we want a Model Community,” said Karen Blondel, Environmental Activist and Red Hook Houses resident. “The Model Block builds toward community goals. Let’s use the problems Red Hook has today to train our youth in the solutions for the future, like cleaning up the environment.”

“This project is uplifting — and is just what Red Hook needs,” said Tiffany Davis, Founder and Director, Red Hook Arts Project. “It fits right into the community, not overpowering any of the buildings, fits the structure of the buildings, and the block that it’s on, including the school right across the street. It really blends in and looks really good.”