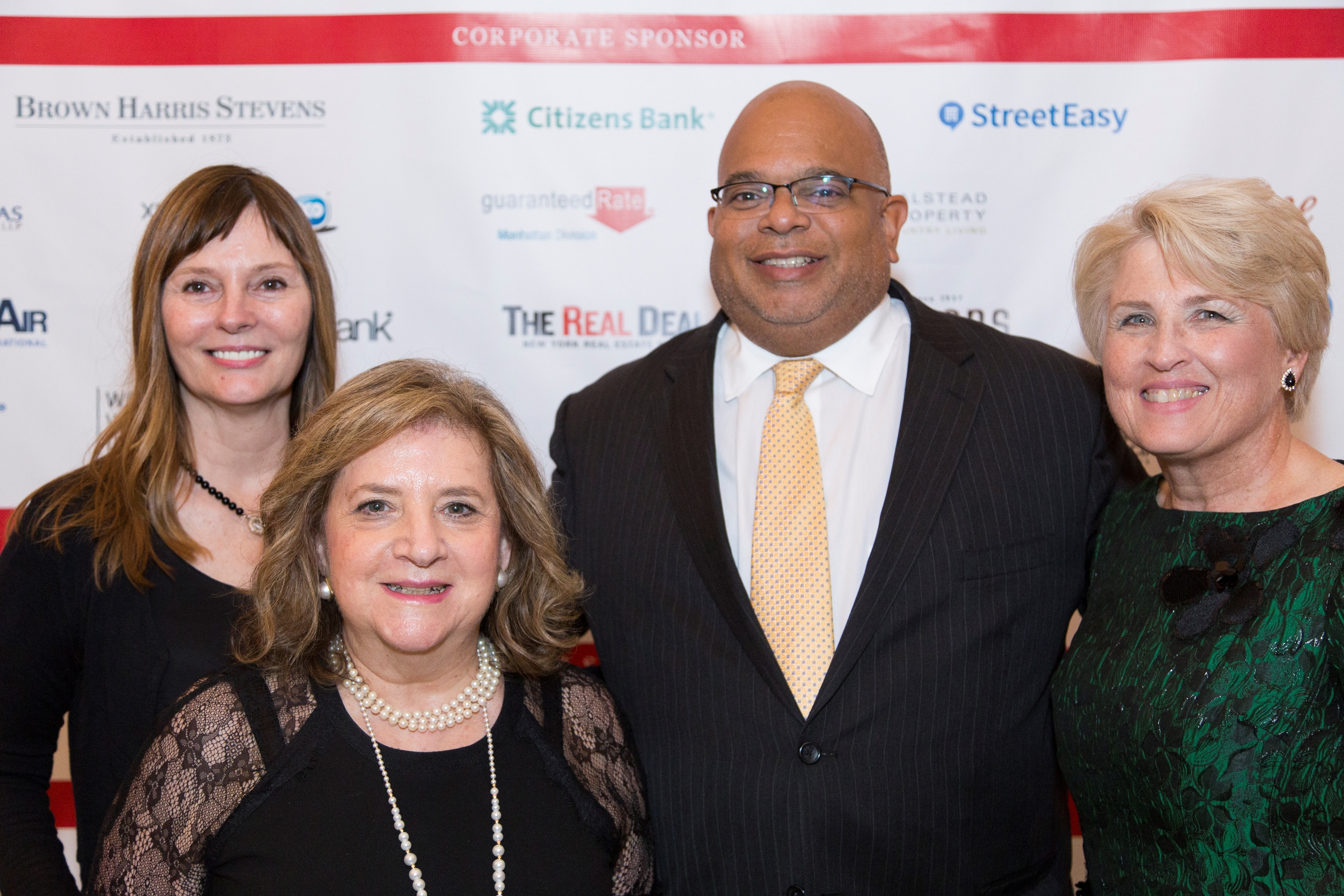 At its 27th Annual Residential Deal of the Year Charity and Awards Gala last week, the Real Estate Board of New York (REBNY) sprinkled a little magic on the brokers who have sold more than $20 billion worth of real estate so far this year.

Awards were bestowed on 15 dealmakers and a new annual globe was dedicated to Eileen Spinola, REBNY’s recently retired senior vice president of education and brokerage services.

“Eileen played a tremendous role in the exponential growth of the education and brokerage services divisions during her more than 20 years at REBNY, which makes The Eileen Spinola Award a fitting tribute to honor her wide-ranging contributions to our community,” said John H. Banks, III, REBNY president.

The theme for the 2015 celebration was “The Magic of New York” and the evening emceed by Barbara Fox and Jeff Rothstein featured entertainment by magicians, Broadway showgirls and fortune tellers.

“I thought the magic was a fun diversion. Real estate is serious business and a little light-heartedness is a nice change,ˮ said Halstead broker Jeff Krantz.

The highlight of his night was seeing his firm’s Tamara Abir collect the Rookie of the Year award. “I love seeing a new agent being acknowledged for having the traits essential to maintaining a career in real estate,ˮ said Krantz.

Compass founder Robert Reffkin said he had “a lot of fun.ˮ

“I was especially proud that one of Compass’s agents, Christine Toes Muldoon, won second place for the rental deal of the year. We had a group of Compass agents and managers there to show our support and celebrate her success.

“I think celebrating the remarkable achievements of agents is something we should do more often,ˮ said Reffkin.

He agreed that the magic theme was a hit. “The luxury listings on television and the big headlines in the press only tell part of the story; transacting a deal can sometimes be extraordinarily difficult.

“To get deals done, agents must be creative, insightful and patient. What they’re able to pull off might look a lot like magic, but it’s pure hard work and determination.ˮ

Gary Malin, president of Citi Habitats, declined to hit the dance floor at the gala — he was too busy talking.

“For me, The Deal of the Year gala is a great way to get together with other people in the industry that I may not get a chance to see very often. Everyone has busy schedules. My favorite part of the evening was spending time with my team in a more social setting outside the office. No dancing, but I did have a great time connecting with people from both my past and present.”

“Also, REBNY is a vital organization for our industry and it’s important to support them.ˮ

Stan Ponte, senior global real estate advisor with Sotheby’s International Realty, said, “”The stand-out from the Deal of the Year for me was the little taste of Broadway with a performance from Pippin.
“Given the fact that in real estate we are all friendly, and sometimes aggressive competitors, this is the one time a year we have a chance to get together and have some fun.ˮ

Ponte’s one disappointment? “I wish I had been able to have my tarot cards read, but there was a line for the psychics.”

Elliman power broker Jacky Teplitzky loves seeing her colleagues let their hair down at the gala.

“You see people in a different angle – on their more wild side. I thought it was a fun evening with a very good mix of people. Every year I see more of a variety, which I like a lot — brokers, attorneys, title people, bankers, mortgage brokers, media and advertising, stagers and more.

“This is very good as we are all so busy we cannot stop have a drink and get to know each other on a personal level, dressed less formal than usual and when we are not “on” all the time.ˮ

Corcoran winner Jacob Wood (second prize award for rentals), said, “It was a big honor to get the award and I loved having the opportunity to meet some of the industry’s most successful brokers.

“The leadership of REBNY were surprisingly good dancers, along with the showgirls.”

TOWN Residential boss Andrew Heiberger said the gala “is a wonderful opportunity to see many of the industry leaders and players that we transact with every day.

“While the efforts of the committee are appreciated, I do not think that the overall event is representative of the multi-billion dollar industry that we represent. I would eagerly volunteer to plan an upscale evening and award show that fairly recognizes and celebrates the accomplishments of all.”

Stribling manager Rebecca Mason is a member of the gala organizing committee. She said the event was a hit. “The energy was great, the food was really good. The highlight was one of my agents being recognized for all their hard work, and also, as a committee member, to get positive feed back from attendees.ˮ

A portion of the proceeds raised at the event were put towards REBNY’s Member in Need Fund, which provides grants to members experiencing a financial crisis or hardship,as well as to the New York City AIDS Memorial, which seeks to raise awareness and inspire action through educational programming about the ongoing AIDS epidemic.

The winners of REBNY’s 2015 Residential Deal of the Year Awards were:

Pulitzer is one of Douglas Elliman’s consistent top producers. Over the last 20 years, she has successfully closed multi-million dollars of transactions spanning fnew York City.

Vickey Barron of Douglas Elliman was honored as the first recipient of The Eileen Spinola Award for distinguished service, which will annually honor a REBNY broker or agent who has made major contributions to the REBNY community by donating their time, expertise, and knowledge in the areas of education, ethics, and professional services for the betterment of the real estate industry.

At Douglas Elliman, Barron serves as the Director of Sales at the newly converted Ralph Walker collection (Walker Tower, Stella Tower, and 100 Barclay), and has played a key role in the dramatic growth of the new development market in New York City by commanding and achieving record-breaking sales.

She has made far-reaching contributions to REBNY serving as co-chair of REBNY’s Education Committee for the last several years, while teaching various continuing education courses and speaking on numerous panels.

She has also served on REBNY’s Ethics Committee, Residential Sales Council, and as a founding member of the New York Residential Specialist (NYRS) Credentials Committee. In 2001, Barron was presented with REBNY’s Most Promising Rookie Salesperson of the Year Award.

The Most Promising Rookie Salesperson of the Year Award for 2015 was presented to Tamara Abir of Halstead Property for her standout accomplishments within her first years working in New York City’s residential real estate market.