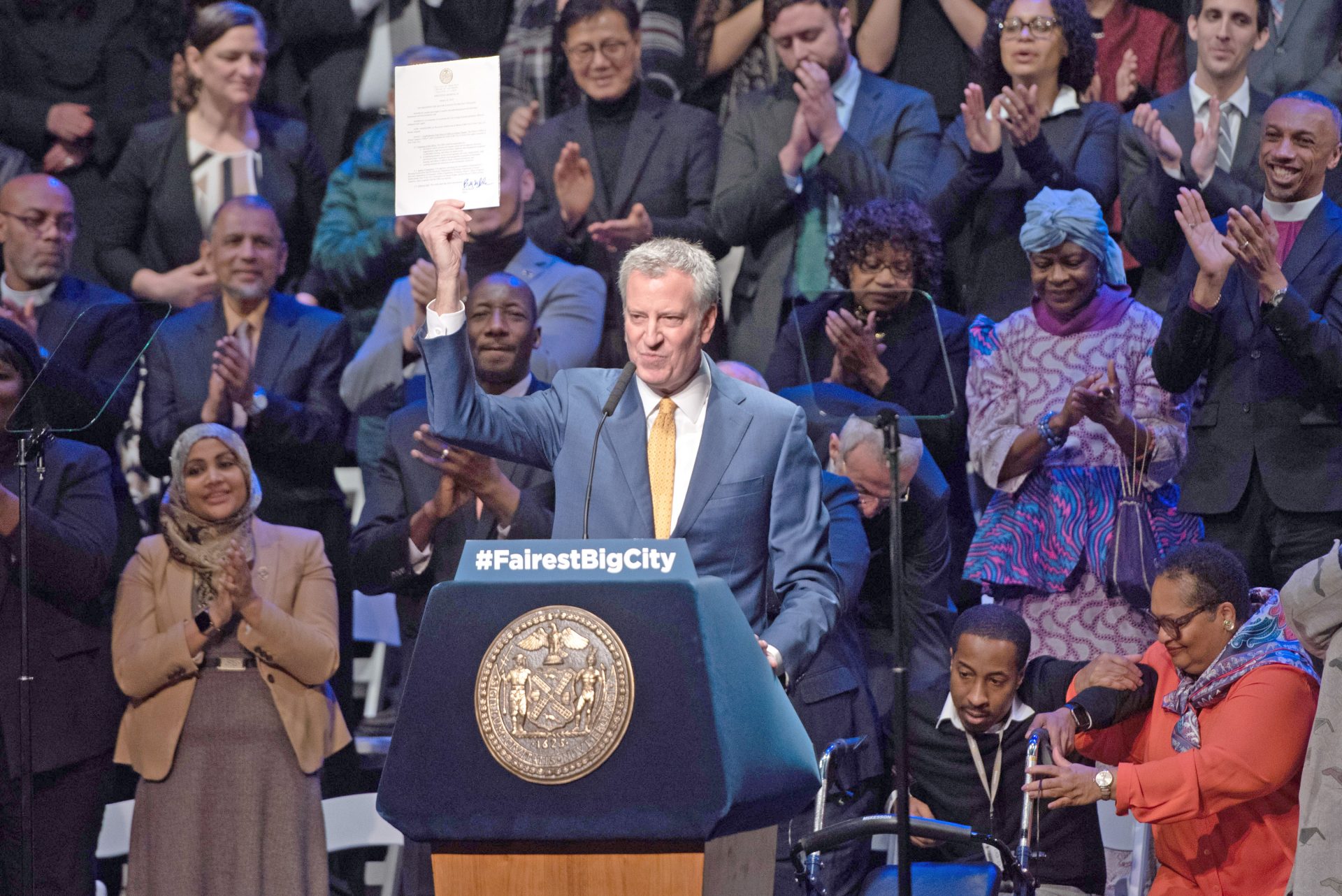 Mayor Bill de Blasio announced the creation of the Mayor’s Office to Protect Tenants during his State of the City address on January 10.

The mayor signed the executive order to create the new government branch on the stage of Symphony Space in the middle of his address.

“[This will be] a new arm of city government that will root out the worst landlord abuse, a force that will hold every city agency as well accountable for protecting tenants,” de Blasio said at his address.

“When a landlord tries to push out a tenant by making their home unlivable, a team of inspectors and law enforcement agents will be on the ground in time to stop it,” de Blasio said.

“We’ll use every tool we have, we’ll fine the landlords, we’ll penalize the landlords, but if the fines and penalties don’t cut it, we will seize their buildings and put them in the hands of a community nonprofit that will treat tenants with the respect they deserve.”

The new Mayor’s Office to Protect Tenants will be modeled after the Mayor’s Office of Special Enforcement and be a one-stop shop for tenant advocates to get their concerns across to the relevant city agencies like the Department of Housing Preservation and Development, Department of Buildings, Human Resources Administration and others.

The Real Estate Board of New York supported the mayor’s call for increased targeted enforcement on unlawful landlords.

“Enhanced coordination among City agencies will better protect tenants and prevent additional bureaucracy that negatively impacts the vast majority of property owners who comply with the law.”

But the mayor isn’t the only one working to eliminate shady landlords.

The Community Housing Improvement Program, an organization of property owners that owns or manages more than a third of rent-regulated units in the city, recently announced a new code of conduct that strictly prohibits any of its members from engaging in any harassment of its rent-regulated tenants.

Their new code of conduct requires CHIP members to create an accessible complaint intake and management system and requires property owners or managers to report violations of any other CHIP member.

“We believe that means holding ourselves accountable and ensuring that all rent regulated tenants are treated fairly and equally,” said Jay Martin, CHIP’s executive director.

“While some city and state officials seek only to shift blame on property owners for a housing crisis of their own creation, we’re committed to stepping up and doing right by New Yorkers.”

Martin added that the mayor’s announcement, that was released before their updated code of conduct, may overlap with their new policies.

“While short on details, it appears this latest proposal would add redundant and conflicting oversight to an industry that is already struggling under the weight of numerous existing regulators,” Martin said.

“We urge the City to work with us, not against us, to provide the best possible housing policies for New Yorkers.”