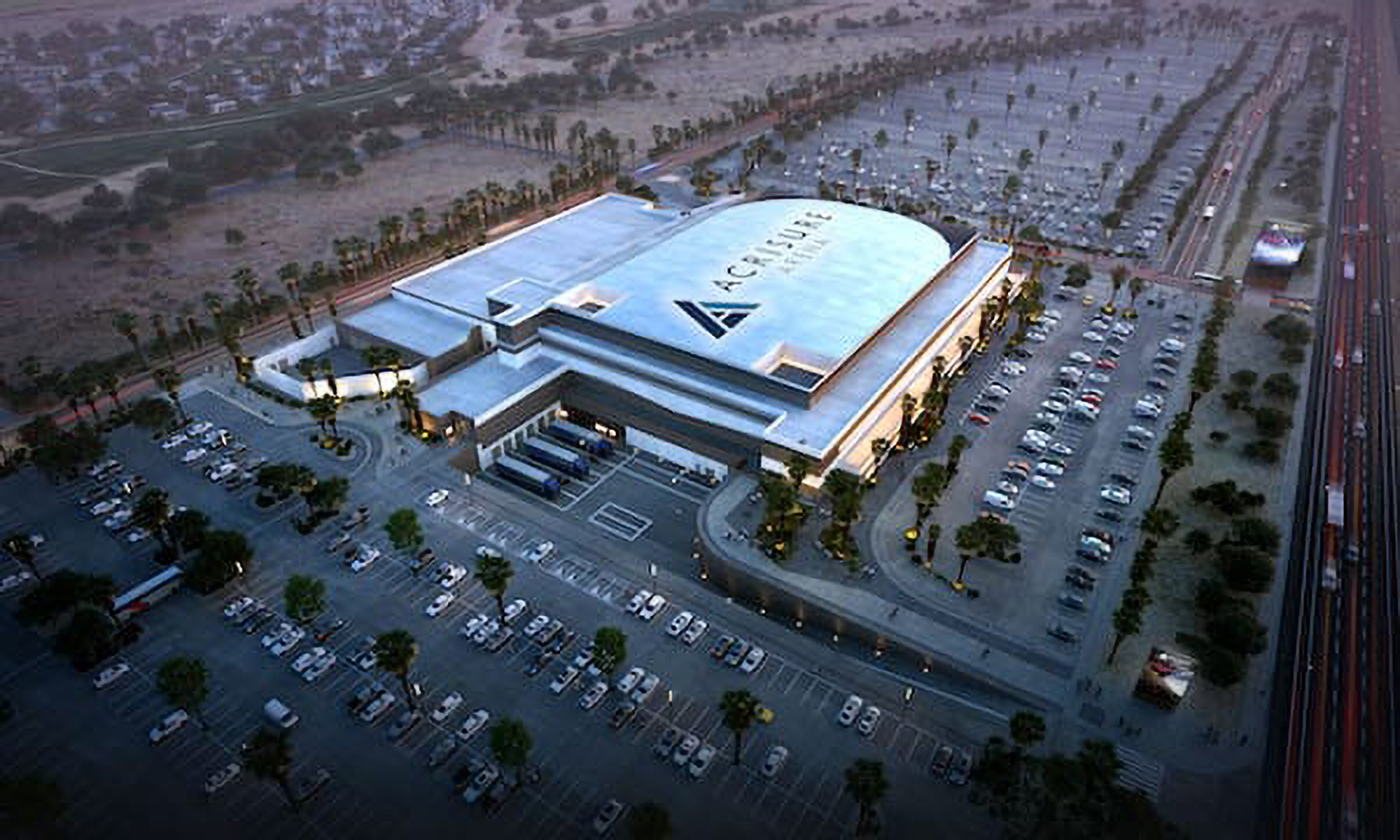 Global design firm Populous and owner Oak View Group celebrated the completion of Southern California’s newest world-class venue, Acrisure Arena, which opened its doors to the Greater Palm Springs public on December 14. The new performance and sports facility will introduce a state-of-the-art music venue to one of the world’s most notable music destinations.

“We approached the design of Acrisure Arena by first immersing ourselves in the local history, landscape, and culture of Palm Springs, one of the nation’s iconic music destinations,” said Robert Norvell, Populous principal and lead architect of Acrisure Arena. “The result is a venue that changes the performance and hockey landscape of the West Coast, simultaneously authentic to its site and leading the industry into the future of entertainment experience.”

Acrisure Arena, with a concert capacity of 11,000, marries an intimate and personalized venue with the infrastructure and technology to serve as an ideal jumping-off destination for artists beginning major tours along the West Coast. It is the first indoor/outdoor hockey arena — unique premium amenities harness the warm, year-round desert climate, giving guests access to outdoor concessions and club balconies with a breathtaking array of views, all while remaining inside the arena’s gates. The arena features several sustainable design elements, working with the landscape’s geographical conditions and leveraging its desert climate.

“Populous is one of the best in the business and that’s why we’ve partnered with them on a number of our other buildings such as UBS Arena and Climate Pledge Arena,” said Tim Leiweke, chairman and CEO, Oak View Group. “Palm Springs is well-known for its signature architecture and its beautiful surrounding mountains, so with Acrisure Arena, designing a building that perfectly fit the landscape, with sustainability in mind, was essential. From unobstructed sightlines and premium eateries to modern artist dressing rooms and sports facilities, Acrisure Arena will be the crown jewel of the entire Coachella Valley.

Populous conducted an audit of the Palm Desert area, studying local architecture and capturing colors, materials, language, and local design to incorporate into Acrisure Arena, from exterior expression to interior design. The team wanted this space to be a leading sports and entertainment venue, while also fitting seamlessly and authentically into its community. As such, the windswept forms of the exterior reflect the natural vernacular of the desert landscape with palm tree islands as an oasis and respite from the harsh sun.

The arena’s seating bowl is buried in the earth, downsizing its overall height and allowing direct access to the main concourse through a seamless at-grade entry experience. The arena footprint also includes the Berger Foundation Iceplex, the training facility for the Firebirds that is open to community use and events. The Iceplex is home to a 5,000 square-foot training facility, with a 1,500 square-foot players’ lounge for the AHL team.

Acrisure Arena will host some of the world’s most popular artists, fitting for a region with a rich history in musical entertainment. In order to serve as a first stop for large west-coast tours, the arena’s infrastructure, along with its artist amenities, rival those of any major venue of larger capacity. Acrisure Arena’s rigging system boasts the same capabilities of the nation’s major performance venues, allowing artists to fully test their touring setup and entertainment assets in their first show. Also a hockey arena, the conscious choice to forgo a center-hung scoreboard allows for artists to rig their stage show any way they choose with easy access to multiple catwalks, making the location ideal for rehearsals before a tour begins.

In addition, the intimate size of the venue allows for optimal performance acoustics. The rigging grid is approximately 60 feet above the ground, compared to a tradition 120 feet in a larger arena. This, coupled with sound paneling and the two-level structure of the bowl, creates excellent acoustics, while also generating a loud atmosphere for hockey games.

An arena designed for some of the most popular artists in the world requires detailed, bespoke interior spaces. Populous led the interior design of the arena, from concourses to artist areas, premium clubs and suites. A large premium club hosts exterior balconies with views of the San Jacinto mountains, while the two sponsor-branded end stage bars bookend the arena, allowing for a unique concertgoer experience. These spaces, along with the two Founders’ Suites and 20 premium suites, employ a unified, intimate and locally inspired style that flows easily from one space to another. The design includes local influences and artwork, warm neutral color tones, stone such as marble and quartzite, and notable iconic Palm Springs photography.

— and the two sponsor-branded center-ice bars, which reflect a classic Palm Springs pool party, complete with yellow baffled ceilings and black-and-white pool tile on the bars.

One of the most attractive aspects for artists visiting Acrisure Arena is the expansive artist compound. A space that is traditionally hidden underground, the star areas at the arena are both indoors and outdoors, with an outdoor space that includes sports areas, a bar and an eating area for artists and their groups. In addition, all indoor star areas are located directly off the loading dock, so artists and their crews can position their vehicles at the loading dock and walk right into their green rooms and crew areas, all outfitted with lounges, restrooms and prep areas.

Populous designed Acrisure Arena to solve for a notable feat — hosting two ice sheets in one building in a desert climate — while using sustainable design techniques to lessen the environmental impacts of a cold building in a warm climate.

The sustainability of the arena begins with the structure. Both ice sheets are buried several feet below grade to harness the cooler nature of the ground, limit solar exposure and increase energy efficiency. The reflective roof of the arena reduces heat gain, while the landscape uses native and locally adapted plant material to reduce required maintenance and irrigation and minimize stormwater runoff, which has the potential to provide benefits to local wildlife. Recycled water is used for some on-site irrigation, and trenches capture and infiltrate the storm water runoff, recharging the groundwater supply. The rest of the site uses vegetated swales that are incorporated into the site landscape.

From a visitor-facing perspective, the arena will promote alternative transportation by providing bicycle racks and pathways and areas designated for rideshare. The arena uses all LED lighting and sports lighting, and the design eliminated glazing at the south and west façades to reduce heat gain and provide a more energy-efficient exterior.