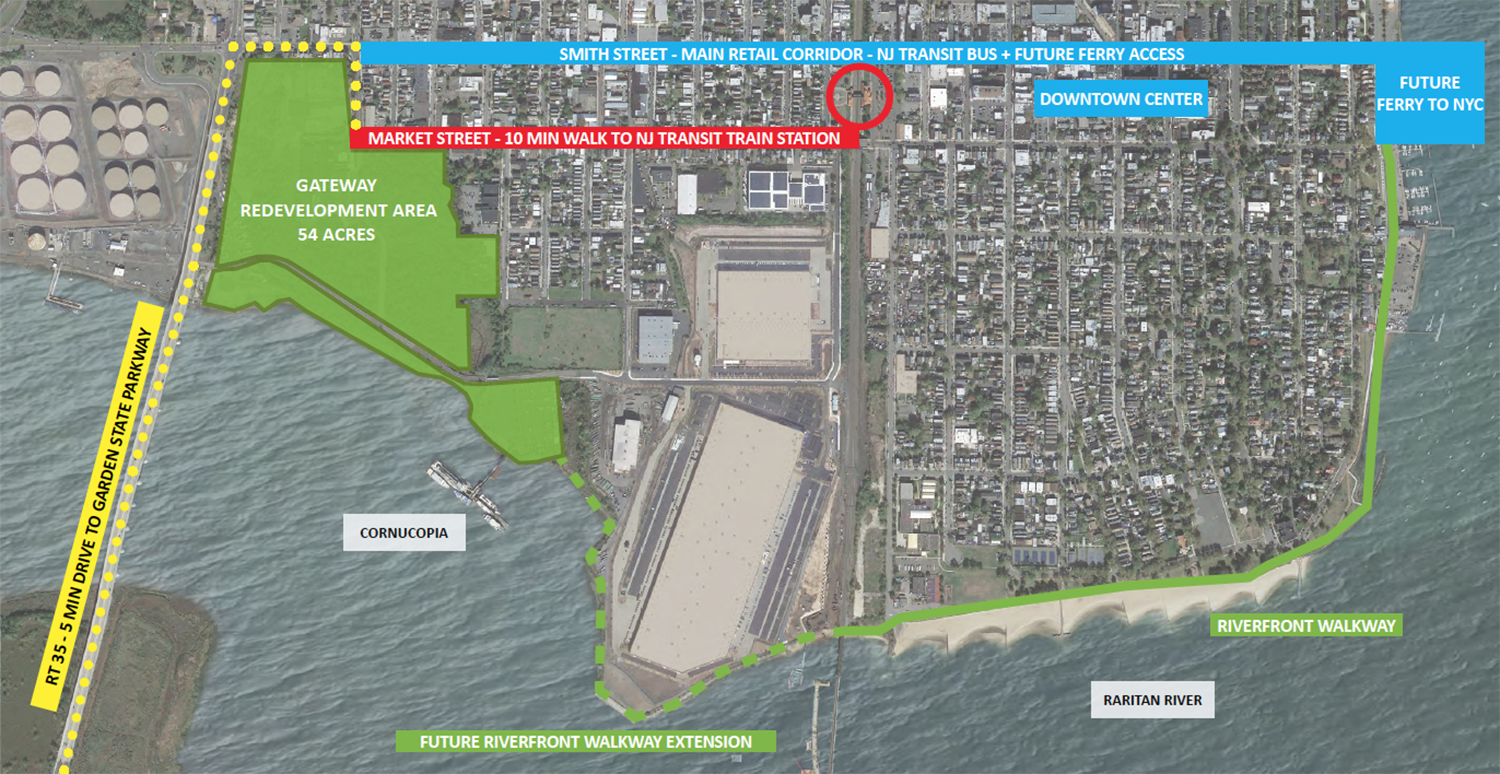 Fueled by Perth Amboy’s strategic location at the crossroads of New Jersey, the city has a unique opportunity to create more mixed-used communities and generate more tax revenue within its many redevelopment areas.

The Perth Amboy Redevelopment Agency (PARA) has identified three key projects that it is now advancing for 2023. Some initiatives build upon older plans that have been discussed for years, while others have been brought forth by developers eager to take advantage of all that Perth Amboy offers as a waterfront urban core.

“A key reason for the enormous interest in Perth Amboy is our unparalleled transportation
infrastructure,” said PARA Chairman Joel Rosa. “The city has a NJ Transit train stop at the heart of the downtown, a beautiful marina for boat travelers, public transportation that can take you anywhere throughout the state and major highways that pass through the region.”

A major project on the drawing board is known as “Gateway,” sitting on 54 acres of developable property just south of Smith Street at the Route 35 Victory Bridge.

Redevelopers consider the Gateway site a prime parcel. It sits on the water near the Cornucopia Cruise Line. It’s just a 10-minute walk to the NJ Transit station, as well as the Smith Street retail corridor. Gateway is also just steps from the planned Borinqueneer Park and what will be an extended riverfront walkway and park.

In short, says renowned architect Dean Marchetto, the location is ideal for “place making,” and has “opportunities for affordable housing, jobs, and social empowerment.” Many proposals have been put forth, taking advantage of the easy access of this property to the city’s downtown and waterfront.

Another opportunity is creating a transit village at the Perth Amboy Train Station. The blocks between Market Street and New Brunswick Avenue and between the NJ Transit tracks and Maple Street represent a rare opportunity to redevelop many vacant and city-owned parcels downtown.

The timing is ideal. NJ Transit is earmarking nearly $50 million to overhaul the Perth Amboy
Train Station, built in 1927, listed on the National Register of Historic Places in 1984 and now serving nearly 900 weekday commuters each day.

The goal is to build density on the four blocks between Market Street and New Brunswick
Avenue, replacing low-rise buildings that are currently not taking advantage of the strategic
proximity of the train station. PARA is also eager to introduce entertainment and culture into the downtown mix, creating a more vibrant outdoor environment into the evening hours.

Another key project will be at 599 Fayette St., a brownfield that is the former site of a municipal landfill that closed in 1974. The 20-acre parcel is ideal for office space, homes and commercial/retail opportunities.

This unique site of empty land in the middle of the city, with easy access to Smith Street and all the local highways, is ideal for redevelopment, with private investors required to cap the landfill as a “final remedy,” manage any soil gas and comply with all other state environmental regulations as conditions.

“It’s often been said that the future belongs to those who can visualize it,” said PARA Vice
Chairman Daniel Gonzalez. “At PARA, we believe the redevelopment projects under
consideration are our generation’s shining opportunity to create lasting amenities for Perth
Amboy, further catalysts for redevelopment and investment throughout our city.”