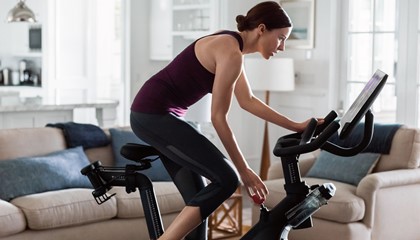 Exercise bike purveyors and fitness tech company, Peloton, will put their wheels to the ground, transitioning their corporate headquarters to a new 312,000 s/f location at Manhattan’s Hudson Commons in 2020.

“New York City is where Peloton started, and it will continue to be our home as we scale our business globally,” said John Foley, Peloton co-founder and CEO. “For a long time, New York was considered to be an afterthought for tech start-ups, but it’s now the second highest performing startup ecosystem in the world…”

Cove Property Group and partner, Baupost Group, purchased the building in 2017 and have continued to redevelop the site to make way for 700,000 total s/f of high end office space.

According to a release from Newmark Knight Frank who represented Peloton in the lease, the Hudson Commons space, located between West 34th and 35th street on 9th Avenue, will occupy floors four through 10 and a 13,000 s/f basement. The new headquarters will be six times larger than Peloton’s current location in Chelsea.

Peloton’s future headquarters — which will act as the anchor for the building — is set to be situated next to a recently announced broadcast and production hub, Peloton Studios, a 35,000 s/f space slated to open at Brookfield’s Manhattan West development in 2020.