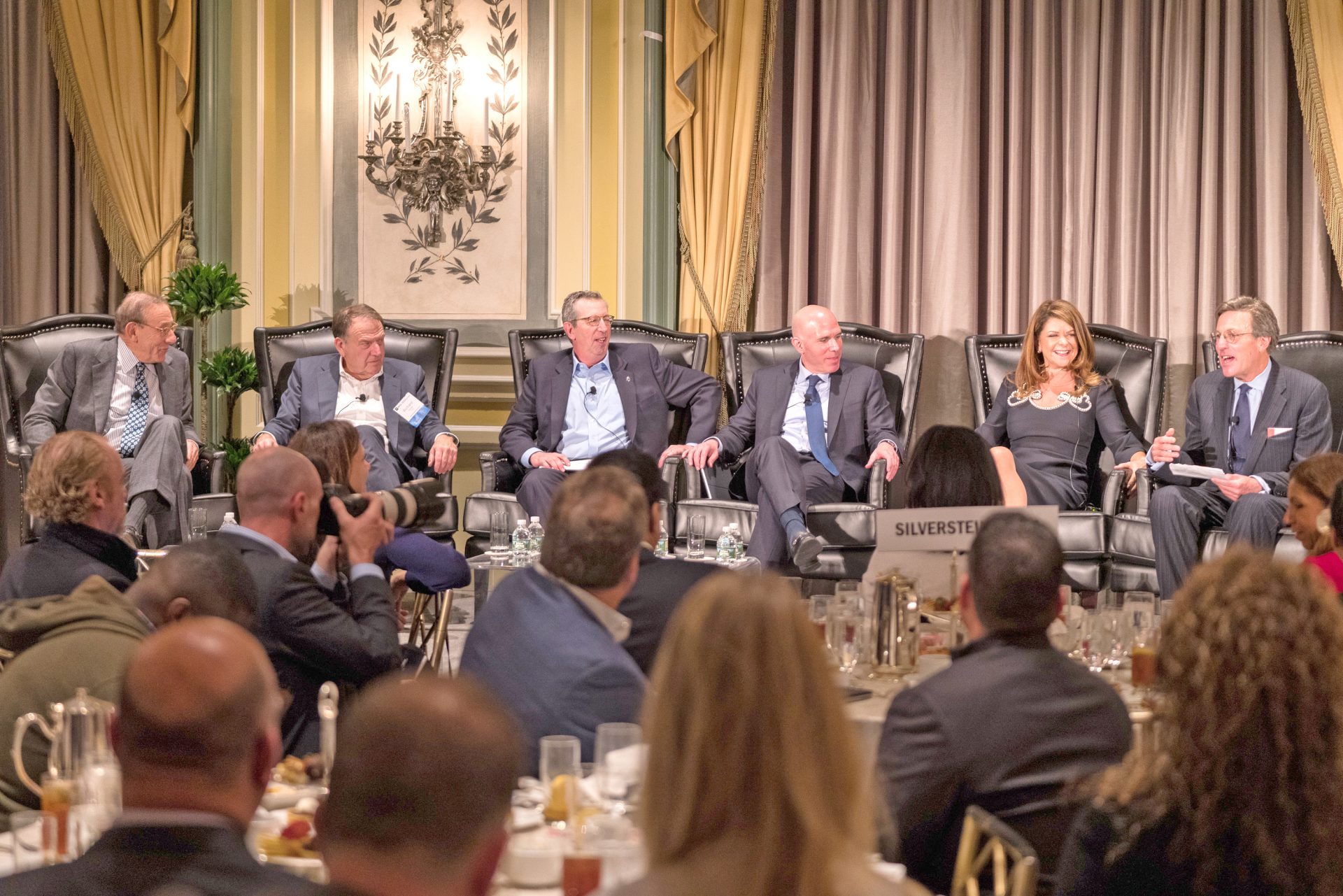 Big Apple issues a hot potato when it comes to building for the future, say developers

While infrastructure and affordable housing were on the minds of panelists at New York University’s Schack Institute’s annual conference on capital markets, a tide of union protesters had an ulterior agenda.

Amid the conference’s keynote panel on the outlook of New York City’s real estate market and beyond called The Golden Apple, the first questions were yelled by protestors at panelist and chairman of Related Companies, Stephen Ross.

Related and labor unions are currently embroiled in a bitter battle over who will complete the final phase of an expansive Hudson Yards project.

After nearly half a dozen interruptions, the panel pushed on, and with protests fizzled out, participants slowly turned to the prognosis for New York city’s future and the delicate balance of business and labor therein.
New York, panelists concurred, is a delicate ecosystem.

As an example of one of the city’s flashpoints, Scott Rechler, CEO of RXR Realty, highlighted one of the biggest stories to enter the city’s purview: Amazon.

“Everyone in this room should think Amazon is great for New York City,” he said. “But if you look at the political environment out there and if you’re reading some of the tea leaves, there’s a ton of people that are pushing back against Amazon. Some of it is legitimate fear that they’re going to replace them, or their business, or their neighborhoods.”

While the influx of jobs — 25,000 in total according to the company — is something Rechler said “has to be a positive” he also added that RXR would be remiss not to consider any unintended consequences for residents.

“We have to also think about what are the consequences and make sure we address those consequences and just don’t close our eyes to the people who don’t have voices to speak loudly on this issue,” said Rechler.

“If we had a failing infrastructure, if the subways don’t work, if there’s not enough schools, not enough roads, all this stuff would just crumble under its own weight,” he said adding that action from congress would be the lynchpin for improvements.

Getting the improvements done, however, is a different story altogether according to Maryanne Gilmartin, co-founder & CEO of L&L MAG, who helped oversee the fruition of Brooklyn’s Barclays Center in her role as CEO of Forest City Ratner. Often times, she said, the process is an uphill battle.

“It is difficult to do anything of scale in this city,” said Gilmartin with a pointed emphasis.

During Gilmartin’s and Forest Ratner’s push to build Barclays — a project that underwent the same New York State-run approval process that Amazon intends to follow — the development faced 35 lawsuits, 10 years of delay, and eventually even shelled out $72 million to rehab an adjacent subway stop at Atlantic Avenue.

“We went down into the bowels of the New York City transit system and every time we came back we said ‘there’s deterioration; there’s corrosion; we’re in need of MTA assistance,’ you know what they said? You touch it, you own it,” said Gilmartin. “That is not the way the city is going to rebuild its infrastructure, it’s just not sustainable as a business model. Something has to change.”

Echoing Gilmartin’s statement, Rechler said that with every pivotal project there are just a couple methods developers can use to see it to fruition.

“There’s a bureaucracy out there that is effectively controlling all of this, and the only way to deal with bureaucracy is to beat it back or start from scratch. Right now it’s beating it back,” said Rechler. “I wouldn’t be surprised at some point during the next big project that it’s starting from scratch.”