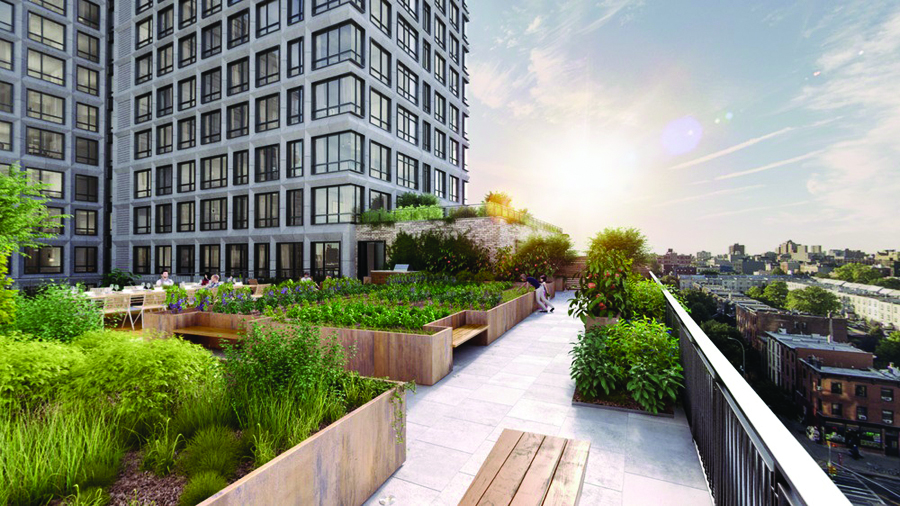 Downtown Brooklyn’s renaissance is well underway as new retail and residential continues to grow.
In one pocket of the neighborhood, a sleek and modern condo building is leading the charge to draw in a new wave of residents.

550 Vanderbilt is the first building to open at Pacific Park Brooklyn, the 22-acre site that will ultimately have 16 buildings and 350,000 s/f of public park space once completed.

The 17-story 550 Vanderbilt was developed by Forest City Ratner and Greenland USA.

The tower first launched sales in June 2016. This summer, the development team brought in Ryan Serhant and his team from NestSeekers to close out the tower.

“We got involved this summer and it’s been absolutely insane,” said Serhant. “We’re really looking at it as a new era for Brooklyn. It’s not just another building with pretty finishes and nice amenities.”

Serhant did call the building one of the “most amenitized” in Brooklyn.

The 218-unit condo, designed by architect COOKFOX, has 10,000 s/f of amenities. They include a massive gym, a large amount of lounge space, a library that was created in partnership with bookstore McNally Jackson, and a roof deck where residents can grow their own vegetables.

“What we’re really selling is a new neighborhood,” Serhant said. “This is the first chance to own in a building inside of a park. How often do you get the chance to do that in New York? It’s a great deal for people who don’t want to look back and say, I wish I did that.”

Many current denizens of Brooklyn and nearby neighborhoods have come to see the building, but many have also made the trek from Manhattan, said Serhant.

“More than I think we even anticipated,” he said of prospective buyers. “What you can get with money here you can’t get in Manhattan.”

Pricing starts from the mid $700’s for the units, which range from studios to a four-bedroom penthouse, which is listed for $6.86 million.

In early 2014, 550 Vanderbilt first started to take shape when Forest City Ratner signed a joint venture agreement with Greenland USA. One of the conditions of the agreement called for starting two buildings within a certain time, as well as starting construction.

Susi Yu, executive vice president of development at Forest City Ratner, said the team looked at the overall Pacific Park project and chose the corner of Dean Street and Vanderbilt Avenue for the first building.

“It was the bookend to really jumpstart the project,” said Yu. Construction began at the end of 2014, and sales were first launched in June 2016, after the project received approval from the Attorney General’s office.
Forest City tapped Jodi Stasse of Corcoran Sunshine to lead sales. “They did an amazing job helping us come up with a unit mix and initial pricing,” said Yu.

After they had opened the building and sold through about 65 percent of the inventory, the development team decided they needed “fresh blood” at the project, so that’s when they tapped Serhant to close out sales.
“He’s obviously very different to Corcoran Sunshine’s approach toward marketing and definitely has a cult of personality that follows him around,” said Yu. She said the since bringing in Serhant and his NestSeekers team this summer, sales have been “robust” at the project.

Yu and the development team felt the location of the building would attract a diverse demographic, and attract residents from nearby areas like Prospect Heights, Park Slope, and Clinton Hill.

“People love brownstone living, but after doing it for decades, it sort of gets harder and they want full-service building living,” she said.

“I think that offering has not been regularly available in the Prospect Heights area, especially with a designer like Rick Cook, who did 150 Charles and 1 Bryant Park.”

The Pacific Park project as a whole is picking up steam, as four other buildings in the plan are under construction or in various stages of opening. Yu said the new developments have helped turn interest more south than north in Brooklyn.
“I think people’s perception of the neighborhood and center of excitement and energy about Brooklyn has definitely shifted from the northern borders of Brooklyn to the south and Prospect Heights,” she said.