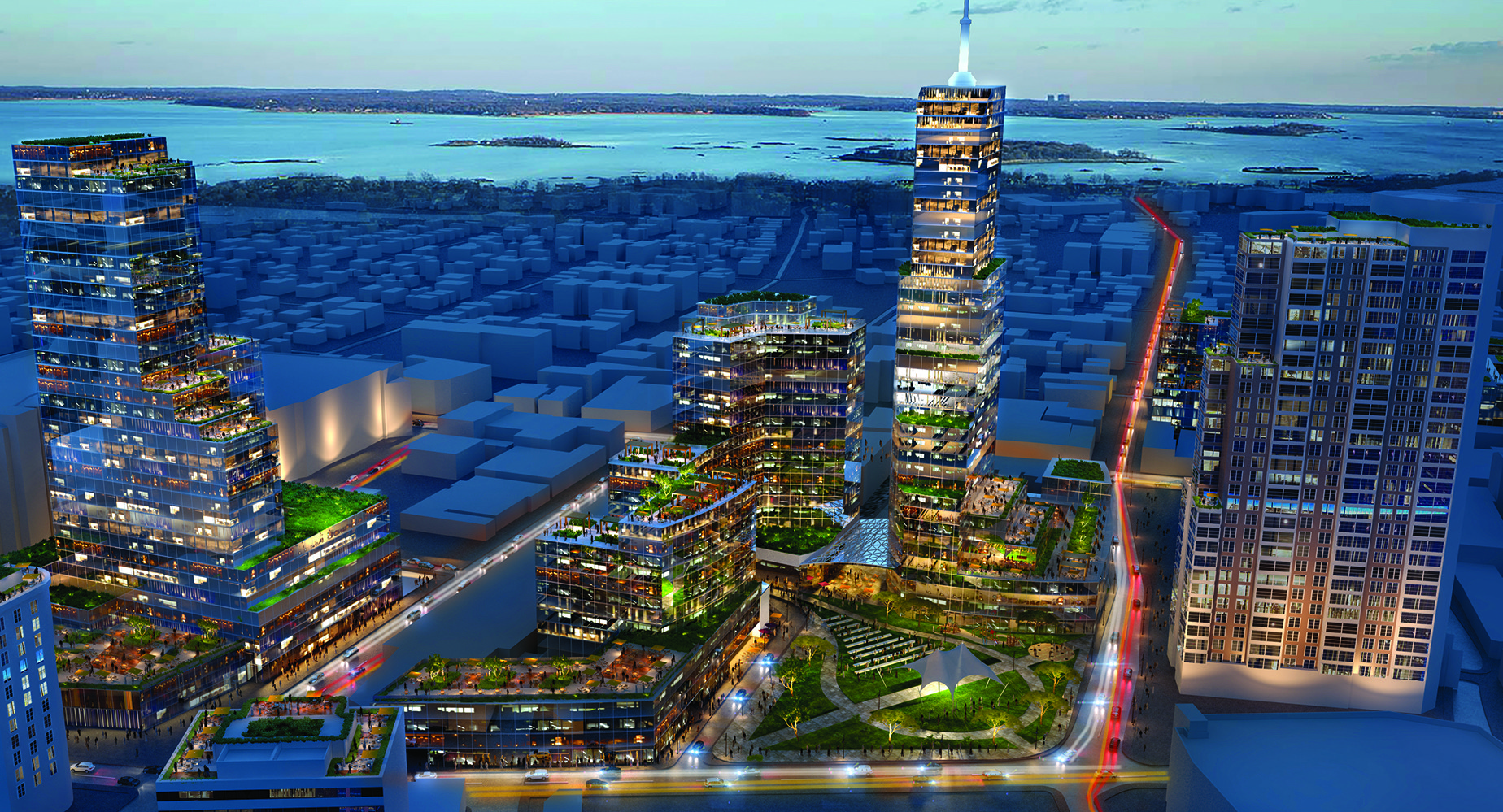 In New Rochelle, the strategy is: if you zone it they will come

When Amazon launched its search for a second home, the usual suspects all came out of the woodwork but so did at least one notable headscratcher.

Consensus picks such as Atlanta, Dallas, Denver and Boston have risen as front-runners while New York’s global footprint gives it a puncher’s chance and Newark has elbowed its way into the mix with a cushy package of tax breaks. New Rochelle, on the other hand, has yet to surface on anyone’s short list.

Nonetheless, the 80,000-person suburb is there, a shrub in the Redwood Forest, trying to measure up to cities with iconic skylines, bustling international airports, professional sports franchises and populations ranging well into the sixth and seventh digits. It might seem ridiculous now, but just give it a decade.

“We’re a long shot, as every specific community is a long shot, but it would not be realistic for us to even apply if we didn’t have our 10-year development plan,” Mayor Noam Bramson said. “Our downtown plan makes us a plausible applicant.”

Situated on the Long Island Sound on the southern edge of Westchester County, New Rochelle is in the midst of a resurgence, not as the result of happenstance or good fortune, but rather one of meticulous design orchestrated by the city and its master developer, RDRXR, a joint venture between two private developers, Renaissance Downtowns and RXR.

Paving the way for 12 million s/f of new development, including more than 6,000 new residential units, 1,200 hotel rooms and 2.4 million s/f of new office space, the plan aims to transform the sleepy burb into a the type of 21st century, live-work-play community so widely sought by millennials and their prospective employers.

At the city’s behest, RDRXR rewrote the rules for developing in core New Rochelle. It changed zoning for 300 acres of land in the city center, negotiated tradeoffs for as of right construction as well as height bonuses and completed environmental reviews of every site all while engaging in dialogues with community members every step of the way.

“We took a step back and thought, ‘What can we do to create certainty for developers?’” Luiz Aragon, the city’s commissioner of development, said. “In the past, a developer goes in and negotiates with politicians, negotiates with the community and that can take five or 10 years and we said that’s not acceptable, what can we do to expedite this process?”

The conclusion they reached was to create a plug-and-play infrastructure for builders that scrubbed the horse trading and guesswork from the existing system. Rather than take on this task in-house or with the help of planning consultants, the city handed the keys off to the private sector and RDRXR turned a finished product around in less than a year.

New Rochelle stands out because of its size and scope as well as the fact that it was the first project started by the Emerging Marking Strategy. However, Pinsky said elements of the project can be traced back to RXR’s earlier “urban-suburban” developments, particularly in Glen Cove where it has designed mixed-use developments such as Garvies Point and The Beacon adjacent to the town’s ferry terminal.

“We identified, several years ago, both an opportunity and a need in the New York region for affordable housing options, not just in the five boroughs but throughout the greater metropolitan area,” he said. “We look for communities that have transit access into the city, walkable downtowns, diverse communities and desire for new development.”

It also demonstrates RXR’s continued commitment to suburban markets while many other developers have already written them off because of the rapid reurbanization of America’s big cities.

“If you build in New Rochelle, you have a great apartment with great rent, you still wake up in New Rochelle,” she said. “And I think that’s the issue. More people are living in cities than ever in the history of the world, I’m betting on cities.”

Pinsky, however, said that as urban populations continue to surge and prices continue to skyrocket in area at or around the city center, it’s important to stop looking at urban hubs not by their municipal boundaries.

“It’s shortsighted to restrict ourselves to development only areas that happen to fall in political boundaries created in 1898,” he said. “What people are really looking for is not necessarily a New York City zip code but an urban lifestyle and all the benefits that provides in close proximity to the core of the region.”

Bramson was similarly bullish on the prospects of suburbs.

“The growth of transit served suburbs like New Rochelle is vital to the competitiveness of the greater New York metropolitan area,” he said. “They are saying we need to add almost 4 million new residents and 2 million new jobs in the next 25 years to stay competitive globally and it is neither realistic or viable to expect that all to take place in the five boroughs.”

RXR was first drawn to New Rochelle by 12 acres of land near the city’s train station, which Pinsky is quick to point out provides a shorter trip into Grand Central Station than he can manage from his home in Park Slope, Brooklyn. It approached the city about changing the zoning on that relatively small slice of land and the city countered by offering the entire downtown.

Today, the company is 16 stories into its first 28-story development under the new plan, 587 Main Street. Featuring 280 rental units, 15,000 s/f of retail space and a black box theater to replace the old Loew’s theater that sat on the site for decades, the project embodies the character of the reborn downtown. RXR plans to break ground on its second project, a dual-tower 28-story project that will replace a parking garage just south of Main Street, next year.

Although RXR had something of an inside track, Bramson said most of the developments that have come as a result of the revitalization plan have come from other companies. In total, the city has seen about a dozen project crop up since 2016, he said.

Bramson said the city is on pace to meet its 10-year buildout goal but added there is a slight sense of urgency to take advantage of the current, development-friendly economic cycle.

“The sooner the better,” he said. “We realize the pace of progress depends on the national economy and other factors beyond our control and development is likely to wax and wane over the course of the next decade.

“We’re aware that there are windows of opportunities and we have no way of knowing how long they’ll remain opened.”

One of the pre-ordained tradeoffs for development is a mandatory contribution to the city’s “Fair Share Mitigation Fund,” a pot of money used to fix roads, expand schools and make other necessary adjustments to offset new development and growth. The contribution each developer makes is determined by a formula that focuses primarily on the size of the development but also provides discounts to early investors.

“The benefits package is more generous in the in-years and less generous in the out-years,” Bramson said. “We wanted to provide incentives for developers willing to be pioneers”

Developers who want build beyond what is allowed within the new zoning can do so by financing other community benefits, such as affordable housing, historic preservation and municipal parking.

These offsets were negotiated through countless hours of conversations with New Rochelle residents inside churches, synagogues and local living rooms, Pinsky said. Rather than forcing a set plan down the community’s throat, he said RDRXR tried to approach people with an open mind and actually hear them out.

“If more developers spent the time not just saying that they’re listening but actually listening, they’d get a lot more done,” he said. “One of the things that we have working to our advantage at RXR is we have a number of people working here that have worked in both public and private facilities. That kind of ability to put ourselves into their shoes certainly helped to smooth the process out.”