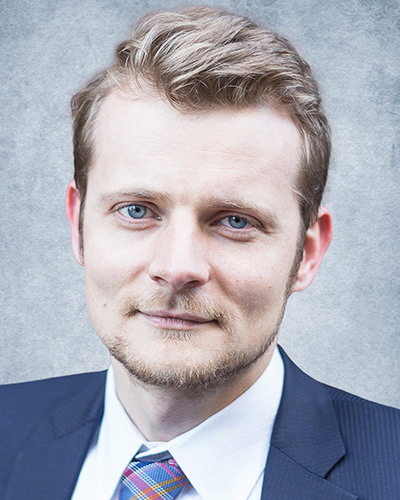 Jakub Nowak and his team at Marcus & Millichap are blazing the trail for industrial property sales in New York City.

By thinking outside the box and taking a hard look at trends and analytics within the hot industrial sector in the outer boroughs, the team has closed on scores of deals over the last year.

“You have a tremendous amount of growth in Brooklyn and Queens, they both grew by hundreds of thousands of people in the past five years, and that demand is trickling down to the office sector in a big way,” said Nowak.

Originally from Poland, Nowak also spent time in Germany before settling permanently in the US, where he attended high school and college.

While an undergraduate, real estate wasn’t anywhere on the radar for Nowak, who studied economics and political science and was thinking about becoming a lawyer. His first exposure to the real estate industry was working in residential leasing and then commercial leasing, which he did for a year after graduating from college. He came to like the field, and got to know the manager of Marcus & Millichap’s Brooklyn office through a mutual friend.

Six years later, he has a 10-person team focusing on industrial sales in a city “bursting at the seams.”

“It’s a very specific subsector,” said Nowak. “No one’s really been talking about it for a few years.”
That’s not the case anymore. This year, Nowak’s team has completed or put under contract $160 million in deals, doubling their production since the same time last year.

One of the team’s most recent deals was in an industrial area of East Williamsburg on Kingsland Avenue, where they represented both the buyer and the seller.

A partnership led by Mark Grunfeld, which includes Abe Mandel, Joseph Brunner and Jerry Brach, purchased a mixed-use building at 78-92 Kingsland Avenue in Williamsburg for $12.54 million. The new owners are looking to turn the building into a creative hub.

The deal is one of many in a “tremendous shift” that is happening in East Williamsburg, said Nowak, a big believer in development spurred by good transportation, and in Williamsburg and Bushwick’s case, that means the all-important L train.

“Transit drives residential development and then that drives demand for office space,” said Nowak. Other hot areas seeing redevelopment include Long Island City, Sunset Park along the R train, and areas along the JMZ line in Brooklyn, which Nowak said has somewhat “taken over” from the L train, given the ambiguity over the forthcoming shutdown.

Gowanus is one of the most-talked about neighborhoods experiencing redevelopment. One of the most notable warehouse conversions was LIVWRK and FM Capital, which partnered in 2014 to buy a former warehouse in for $20.3 million. After spending $1.1 million renovating the building into modern office space, they sold it for $73 million in 2015.

In July, Property Markets Group went to contract to acquire a development site along the Gowanus Canal with 332,000 buildable square feet for about $50 million. The site was formerly a one-story warehouse but was demolished several years ago. The firm is considering building a mixed-use property that would contain a mix of office space, a hotel and retail.

And Industrie Capital Partners is now looking to lease its 200,000 mixed-use project on 9th Street in Gowanus.

Along with the demand for industrial space ripe for conversion, demand from traditional manufacturing businesses looking to stay in the boroughs will continue, said Nowak.

“Those businesses are up against a lot from new uses, even deeper in the boroughs the prices are skyrocketing,” he said.

In East New York, Nowak and his team recently completed a deal that was a record price for the area. Nowak and Jason Grunberg represented the buyer and seller of 134 Hinsdale St., an industrial property that sold for $3.6 million. The team is also marketing another property in the area, a 50,000 s/f warehouse, and they are expecting a sale price close to the record.

As prices rise and popular waterfront sites in Brooklyn and Queens are snatched up, investors are looking further and further out, creating a wave of rising prices stretching out through the boroughs. “Bushwick, Greenpoint, East Williamsburg, Gowanus and the Navy Yards are on fire right now,” said Nowak. “If you really drew a line across Brooklyn and Queens stretching to Astoria and Sunset Park, all those areas are experiencing a similar degree of change.”

In Long Island City, Nowak and his team are marketing one of the biggest pieces of land in the neighborhood that is commercially zoned, for $31.9 million. “We think it’s ripe for office development,” said Nowak.

In Brooklyn’s Red Hook neighborhood, the team is marketing a site that is 80,000 s/f of land with a warehouse for $22 million. The property is the largest piece of commercially zoned land to be on the market in the area in a long time, according to Nowak.

Nowak expects prices to continue to rise and demand continue to be high unless there is a “major shift” in driving forces, specifically regarding affordable housing.

“If there’s no legislature for affordable housing, that could put a damper on growth,” he said. “The city is becoming very unaffordable for everyone and people wanting to live here. It ties into 421a and the rising cost of construction.”

However, as long as New York City keeps emerging as a tech hub and retains its status as a financial hub, and with the added booming movie and TV industry in the city, the real estate economy will continue to thrive, he said.

“All of that drives demand for housing and construction. As long as that dynamic persists, more and more people will be moving deeper into the boroughs,” said Nowak.

In the future, Nowak looks to grow his team and find more opportunities deeper into the outer boroughs.

“Two years ago, we weren’t doing anything in East New York and now we’re very focused there, with more than 100,000 s/f over a few deals listed right now,” said Nowak. “We’re seeing that area exploding due to user demand.”