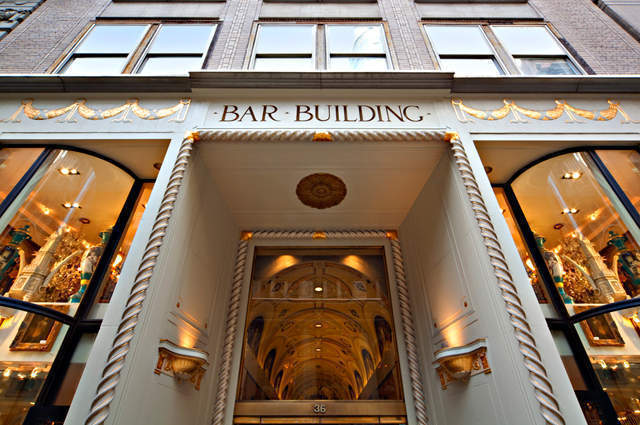 Helmsley Spear has been engaged as the exclusive sub-leasing agent for the entire 10th Floor at 99 Park Avenue in Midtown. The office space consists of 28,718 rentable square feet on the 10th floor of the Class A building located between 39th and 40th Streets with and initial leasing expiration of December 31, 2023. The asking rent is $49 psf. The space is built out and ready for occupancy. Kent M. Swig, Andrew G. Simon and Jimmy Javier are handling the assignment.
•••
Michael Rudder at Rudder Property Group is marketing an office condominium for sale at the Bar Building, 36 West 44th Street, (pictured top) between Fifth and Sixth Avenues), the 3,973 s/f condo on the 6th floor offers high ceilings and an efficient column-free layout. the property is located two blocks from Grand Central Terminal, Bryant Park and Times Square, with access to 15 subway lines, the Metro-North Railroad and the Port Authority Bus Terminal. The asking price is $4,370,000.

•••
RM Friedland announced that Marco Lala has been retained to sell an almost full-block retail and office site in Pelham Bay. 2925 & 2931 Westchester Ave, Bronx, is located in front of the MTA #6 Train Buhre Avenue Station at the intersection of Westchester Avenue, Buhre Avenue and Crosby Avenue. These multiple buildings total 29,700 s/f and sit in an R7-1 / C2-2 zone which may allow for the construction of a 103,000 s/f mixed use property (with a community facility). Asking price is $7.9 million.

Crush Music, a full service music management firm, has purchased the entire eighth floor of a 4,850 s/f space at 49 West 24th Street in the Flatiron District for $4.3 million. The New York-based company, which manages such musicians as Sia, Green Day, Lorde, Courtney Love and Fall Out Boy, will utilize the full eighth floor of the building for its headquarter offices as the firm continues to expand. Alan Bonett and Bradley Cohn of Adams & Co. Real Estate represented Crush Music, while Joseph LaRosa of ABS Partners Real Estate represented the seller, International Bullion + Metal Brokers, in the transaction. Erected in 1915, 49 West 24th Street is an 11-story, 41,800 s/fmixed-use co-op building.
•••
Bestreich Realty Group (BRG) announced the sale of 312 7th Avenue for $3,600,000 in Park Slope, Brooklyn. The three-unit mixed-use property features two floor-through four bedroom units and one store across 4,238 s/f. The building was delivered vacant. The seller was Serenity Prd LLC and the buyer was 7th Avenue LLC. Derek Bestreich, Luke Sproviero, Adam Lobel, Toby Waring, Gabriel Kates, and Daniel Shawah repped both sides in the transaction.

•••
Friedman-Roth Realty Services announced the sale of a commercial building located at 47-02 Queens Boulevard in the Sunnyside section of Queens. The free-standing property has frontage on three streets with three aka’s in addition to its Queens Boulevard address — 47-01 Greenpoint Avenue and 45-01 47th Street. The two-story building has a total of 3,500 s/f and was delivered vacant at closing. It’s the first sale of the property in nearly 50 years and the selling price was $2,700,000. George Niblock, a managing partner, represented both the buyer and seller in this transaction.
•••
James Sousa, president of Weichert Commercial Brokerage, announced that Senior Vice President David Chippendale has sold 1081 Route 22 in Bridgewater, NJ, for $7 million. The 22,000 s/f medical office/surgical center property has a long-term lease with the tenant. It was purchased by 1081 Partners, LLC as an addition to their portfolio. Chippendale, which specializes in both medical office and investment transactions, was the sole broker in the transaction.