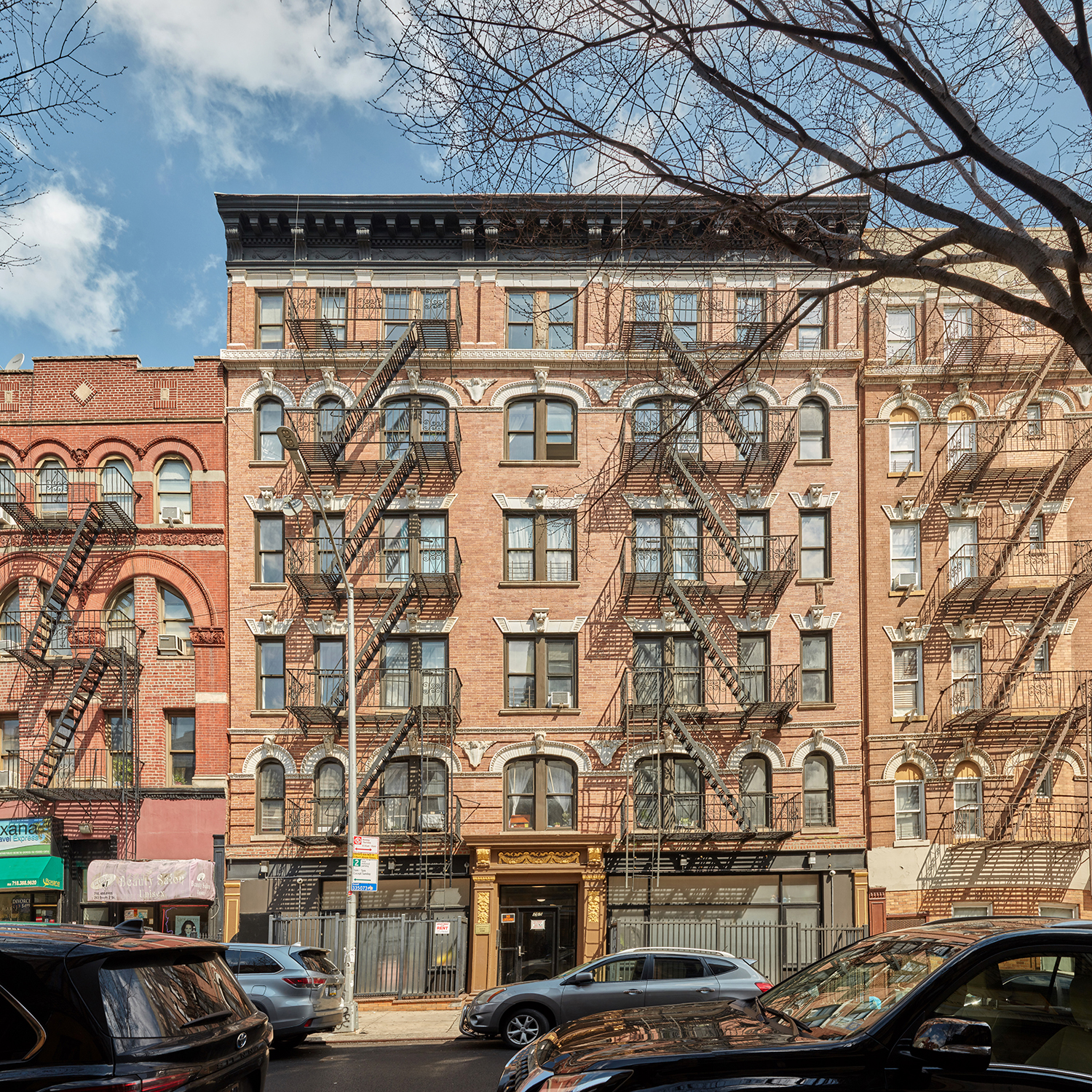 Alpha Realty announced the following exclusive assignments:
• The sale of 265 South 2nd Street in Williamsburg, Brooklyn (pictured top). Lev Mavashev and his team are spearheading the assignment. This six-story building consists of 35-units and 24,200 s/f. Asking price of $17,000,000 represents Cap Rate of 5.3%. Built in 1914, all 35 apartments were gut-renovated in 2015 and upgraded with building amenities, which include a laundry room, virtual doorman, and a rooftop deck. The asset is 100% free-market. It is located a short walk from both the Marcy Avenue & Metropolitan Avenue stations.
• The sale of 1079 Fulton Street, a 30-unit elevator building in Brooklyn’s Clinton Hill neighborhood. Built in 2004, the 100% free-Market property occupies a corner location with 110 ft. of frontage on Fulton. Lev Mavashev and Daniel Aminov are handling the assignment.
•••

Avison Young announced the following exclusive assignment:
• 519-527 Avenue of the Americas, a corner lot development site located at 519-527 Avenue of the Americas and 102-104 West 14th Street in the Greenwich Village neighborhood of downtown Manhattan. James Nelson, Mitchell Levine, David Shalom and Alexandra Marolda are marketing the property. The 12,900 s/f lot is zoned C6-3A and C6-2A, has the potential to develop up to 96,933 s/f as-of-right. The property also features a combined 225 ft. of wraparound frontage. The site is currently improved with six mixed-use buildings that total 41,068 s/f. The site is near the 14th Street Subway Station as well as the Path train as well as the recently announced 254,000 s/f Tech Hub at 124 East 14th Street and the soon to be completed redeveloped Tammany Hall (the former New York Film School). Google and the Highline round out the 14th Street corridor to the west.
• Ninth Floor at 666 Broadway, an 8,621 rentable square foot office condominium, in Manhattan’s NoHo neighborhood. The asking price for the unit is $5,500,000. Mitchell Levine, Brent Glodowski and Bradley Rothschild are marketing the unit on behalf of ownership. The building’s corner location overlooks Bond Street, Lafayette and Broadway and is steps from multiple subway lines.

•••
Cushman & Wakefield has been retained to sell the Port Commons Shopping Center located at 921-927, 937-947 and 961-1029 Port Washington Boulevard. Located just north of the Long Island Expressway and Northern State Parkway, the asset totals 60,209 s/f. It is fully leased to retail tenants and features small office units on the second floor at 921-927 and 937-947 Port Washington Boulevard. The Rite Aid-anchored center is home to several national and regional retailers, as well as local business owners. A Cushman & Wakefield team of Daniel Abbondandolo, Rob Cullen, Joegy Raju and Joe Musso will be leading marketing efforts on behalf of the seller.

•••
RM Friedland is marketing the sale of the only hotel on or near Fordham Road in the Bronx with development potential. The Bronx Park Motel at 2500 Crotona Avenue is situated directly across the street from Fordham University’s Rose Hill Campus. The 20,000 s/f, 46-room property is being marketed by Marco Lala, senior vice president at RM Friedland. The property has 207 ft. of frontage in an Opportunity Zone. The current C4-5D zone allows for mixed-use development with an R7D residential equivalent. There is also an optional inclusionary housing bonus which would allow development up to 132,054 s/f. Offers are being sought.

•••
Schuckman Realty has been retained to sell an assemblage of eight contiguous properties at 544-556 Howard Avenue in Ocean Hill, Brooklyn. Baruch Edelkopf, Joseph Rosenfeld and Steven Hakakian are marketing the Howard Ave. Assemblage, which features 161 ft. of frontage on Howard Avenue. The building totals 15,880 of existing square footage and 14 total units (seven apartments above seven ground-floor retail units). Six of the seven properties have undergone extensive renovation, and the remaining building has been completely gutted and the structure has been reinforced and floors leveled. The zoning: R6A, C2-4, offers an additional 14,279 s/f of unused air rights. The portfolio can be sold as an income producing asset. The seller will also entertain offers on 556 Howard Avenue, a two-story vacant commercial building with an open floor plan consisting of 7,500 s/f and a 3,400 s/f basement.

Avison Young announced the $5.67 million sale of a three-story, mixed-use building located at 357 Bleecker Street on behalf of the property’s ownership. The entirely vacant property is located in the Greenwich Village Historic District area within the West Village, between West 10th Street and Charles Street. James Nelson, David Shalom, Mitchell Levine and Alexandra Marolda represented the seller. The property spans over 2,600 gross square feet and is comprised of one free market residential duplex over a ground floor retail unit. The residential space was owner occupied for over 25 years prior to sale. While the retail space was most recently occupied by Paul Smith but delivered vacant at the time of sale. The building provides access to outdoor space and the retail component will benefit from 17 feet of frontage on Bleecker Street. The buyer is a restaurant user.

•••
Alpha Realty announced the off-market sale of 78-80 Christopher Street in the West Village for $5 million. The five-story, 15-unit multifamily building is situated between Bleecker and 7th Avenue. Alpha Realty’s Lev Mavashev and Shai Egison represented the seller, a long-term local owner who wanted a quick and quiet sale, and the buyer, a local owner looking to grow his Village portfolio. The transaction represents a 4.4% cap rate and $392 psf.

•••
Bestreich Realty Group (BRG) announced the following sales:
• 116-118 East 31st Street, a 13-unit property located between Park and Lexington Avenues in NoMad, sold for $4,750,000. It is approximately 8,297 s/f priced at $572 psf. The seller is 116 E 31st LLC and the buyers are Witnick Real Estate Partners. Justin Zeitchik, Zachary Ziskin and Adam Lobel represented both sides in the transaction.
• 115 5th Avenue, Park Slope, a mixed-use property with six apartments and one retail store, sold for $4,250,000. The 7,200 s/f property priced at $587 psf. It was delivered with six vacant apartments and needs extensive renovations. The seller was 155 5th LLC and the buyers were Max Maleh and Connor Domershick from Conway Capital. Derek Bestreich, Luke Sproviero, Adam Lobel, Gabriel Kates, Toby Waring, and Daniel Shawah represented both sides in the transactions.

•••
CBRE announced that CustomPictureFrames.com, a manufacturer of picture and other framing solutions, has acquired a 45,300 s/f industrial facility on 2.06-acres at 6 Shirley Ave. in Somerset, NJ. The company will relocate and expand from its current operations in South River, NJ. Bill Waxman and Christopher Griffith represented CustomPictureFrames.com in the site selection and negotiations. The seller, Emby Hosiery Corp., was represented by Bussel Realty Corporation.
•••

Cignature Realty announced the sale of a a two-building portfolio for $5,292,000. The properties, 200-202 West 107th Street, are two multifamily apartment buildings with a total of 30 residential units, four retail units and one storage facility located in Manhattan Valley. The 43,713 s/f portfolio, with 17,648 s/fof air rights, sold for approximately $121 psf. Lazer Sternhell and Peter Vanderpool represented both the buyer and the seller in this transaction.

•••
Marcus & Millichap announced the sale of 100 Bay Ridge Avenue, a six-unit apartment property located in Brooklyn, for $1,493,000, or $293 psf. John Brennan and Matthew Dittmeier represented the seller, a private investor who had owned the property for 30 years. The buyer, a private investor, was also secured and represented by Brennan and Dittmeier. Located between Narrows Avenue & Colonial Road in the Bay Ridge neighborhood of Brooklyn, the property provides access to the Bay Ridge Avenue R station and other local amenities. The 1931 brick construction building features large, well-maintained units, with half being delivered vacant.

•••
The Collaborative Group announced the sale of 48 Bedford Street in the West Village, for $6.5 million. The five-story story walkup building is fully deregulated and consists of 10 residential units. The purchaser bought a cash flowing asset in a great location and at a steep discount to the property’s last sale price. Andrew Natter and Harold Fuchs represented the Demler Family in the sale. The pair also represented the buyer, Zachary Hering and Tucker Shane of 33Equities. The sale price represent $970 psf. The buyer closed all cash and is actively seeking multifamily and mixed use opportunities.