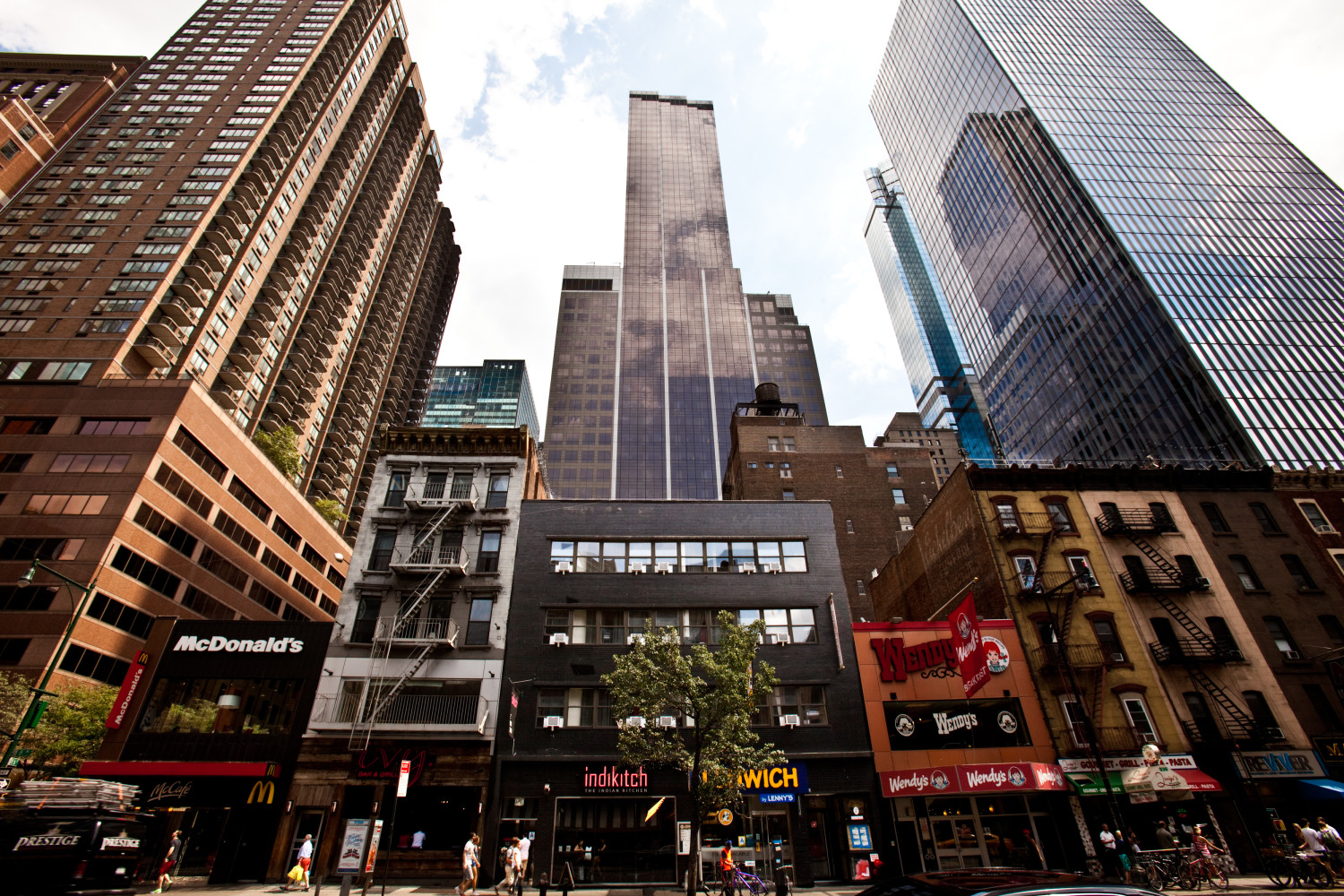 Cushman & Wakefield has been retained on an exclusive basis to arrange for the sale of 940 8th Avenue, a 9,500-s/f retail condo property located in Midtown Manhattan.

Cushman & Wakefield has been retained on an exclusive basis to market for sale a collection of sixteen exclusive luxury residential condominiums at “The Cassa,” located at 70 West 45th Street.

A Cushman & Wakefield team of Maurice Suede, Will Conrad, Jonathan Garfinkel, Dan Soyak and Charlotte Redican will be leading the marketing efforts on behalf of the property’s seller, Assa Properties.

The apartments at The Cassa are being offered fully-furnished and are corporate units outfitted with amenities such as housekeeping, a parking garage and fitness center. The condo package presents the opportunity to effortlessly combine units into duplexes and triplexes. The units currently operate under a “short term stay” model, allowing tenants flexible lease periods with a minimum of 30 days while being charged at a nightly rate.

Located between Fifth and Sixth Avenue, the property is within walking distance to the Bryant Park Subway Station with access to the B, D, F and M trains.

Ariel Property Advisors has been retained on an exclusive basis to sell 2156 Cortelyou Road, a 13-unit multifamily building located in the Brooklyn neighborhood of Flatbush. The asking price for the four-story property, which is dominated by free-market units, is $3.3 million. The building, situated on the corner of East 22nd and Cortelyou Road, spans 8,641 s/f and has 28 feet of frontage. Of the 13 apartments, 11 are free-market and two are rent-stabilized.

All the residential units have recently undergone individual apartment improvements (IAE). Each offer bedroom, living room and kitchen areas, along with large windows that provide a substantial amount of sunlight.

Transportation options include the Q, 2, 5 subway lines and B41, B49 buses all within walking distance to the property.

Adelaide Polsinelli, vice chair of Compass and the newly launched investment sales division, has been hired to sell a two-story commercial condo, of approximately 3,500 s/f, at 424 West 49th in Hell’s Kitchen, near Times Square.

The commercial unit occupies the first two floors of the condominium building. This unit has three separate entrances and elevator access. The space is delivered vacant, column free and ready for immediate occupancy. It was formerly occupied as a theater with a full bank of skylights and exceptional acoustics.

The property is located between Ninth and Tenth Avenues, steps away from the subway, and Port Authority Bus Terminal. The musical, West Side Story, is claimed to have been written about this block. Theater experts declare the fight scene took place across the street.

Jakub H. Nowak and Jason Grunberg, investment specialists in Marcus & Millichap’s Brooklyn office, had the exclusive listing to market the property on behalf of the seller, a limited liability company. The buyer, a private investor, was also secured and represented by the team.

“At $386/SF, the sale of 17-27 Herkimer Place represents one of highest prices per square foot for industrial warehouse in Bedford-Stuyvesant,” Grunberg said.

Marcus & Millichap has announced the sale of 278 19th Street, a six-unit apartment property located in Brooklyn. The asset sold for $1,625,000.

“The sale of 278 19th Street was as a win-win for both seller and buyer, as the seller plans to 1031 exchange into a net-leased property out of state. The buyer walked away with a free-market six-family at a time where values for this property type should continue to stay strong, or even push upward given the current market for rent-stabilized buildings,” Brennan said.

“This property had a ton of issues including a stop work order, non-conforming C of O, and department of building violations,” Finkler said. “Ultimately, our team was able to create a market around this property where we had two buyers at the original asking price. The buyer who signed the contract first and ultimately purchased the deal has plans to knock the current structure down and build an entirely new mixed-use property in its place.”

Bestreich Realty Group (BRG) has announced the sale of 750 MacDonough Street in the Ocean Hill section of Brooklyn. This six-unit multifamily sold for $1,700,000. The property was delivered vacant and it was 5,070 s/f selling at $335 psf. BRG agents Derek Bestreich, Steve Reynolds, Tom Reynolds, and Brian Davilia represented both the buyer, MacDonough LLC and seller, 750MacDonough LLC.

Ed Graf of Houlihan-Parnes Realtors, LLC has arranged for the sale of a 166-unit multi-family property located in Oneida County, New York. The two-story, garden apartment complex consists of 17 all brick buildings. The buildings are located at 318, 319 and 400-604 East Bloomfield Street, Rome, New York 13440.

The transaction was handled by Steve Tierney of Woods, Oviatt, Gilman L.P.P.

Collaborative Group announced the $4.1 million sale of the Hewlett Plaza shopping center located at 16-28 Franklin Avenue, 1205-1215 Station Plaza, 2 New Street, Hewlett, NY. Andrew Natter and Hal Fuchs represented both the buyer, Adam Parkoff, and seller, the Rinzler family. The single-story strip center includes 13 stores in an L-Shape configuration and is located directly across from the Hewlett Train Station. The purchase price works out to an in place 7.3 percent cap rate. In addition to the cash flow, there is potential to increase rents through cosmetic property improvements.

With access to I-295 and the New Jersey Turnpike, East Gate Business Center is located less than fifteen minutes to Philadelphia via the Walt Whitman, Ben Franklin, Betsy Ross, and Tacony-Palmyra bridges.

Situated on 1.08 acres just off of Route 22 in the heart of Phillipsburg, 1 Fairview Avenue was the previous home of Howell Elementary School. Originally constructed in 1928 and vacant since 2017, the Phillipsburg Board of Education placed the two-story building on the market with the goal of securing a buyer who could breathe a second life into the space.

Vindigni said his client was hoping to relocate their successful contract embroidery and screen-printing company from Roselle Park, N.J. In addition to providing a home for his business on the lower level, new owner Michael Tzezairlidis may renovate the main level to provide leasable office space geared towards the arts community and create an economic hub from the once vacant space.

Measuring 80’ by 400’ in size, 121 Rochelle Avenue is zoned for a range of uses including office, residential and retail. The property offers access to Routes 80, 17 and 46. The surrounding area has a population of over 630,000 within a five-mile radius and a median household income of nearly $75,000.

Bergen Landscaping plans to use the property as a landscape contractors’ yard that will feature retail hardscapes. With the purchase of 121 Rochelle Avenue, Bergen Landscaping will bring its footprint in Rochelle Park to two acres.

Lisa Menin of Jacobson Properties has announced the sale of Constitution Professional Park, Newington, Connecticut, a three-building medical office complex containing 31,198 s/f. Constitution Professional Park, which is 95 percent leased, was sold by Newington Realty to a national healthcare real estate investor for a purchase price of $8,850,000.

Menin served as the exclusive adviser to the seller in the transaction.