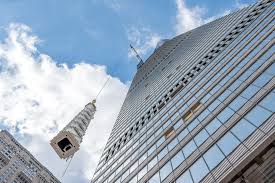 SL Green Realty Corp., New York City’s largest office landlord, today announced that it has signed two new leases at One Vanderbilt Avenue. The East Midtown tower, which will open in August 2020, topped out at 1,401 feet in September and is now 64 percent leased.

In addition, The Carlyle Group, a global investment firm, has expanded its 15-year lease to occupy an additional 33,034 s/f on the entire 34th floor, bringing its total footprint to 160,778 s/f across floors 34 through 38.

This marks The Carlyle Group’s second lease expansion in One Vanderbilt since signing its initial lease in July 2018.

“We’re excited to welcome Oak Hill Advisors to join an exceptional roster of tenants at One Vanderbilt and we are proud that The Carlyle Group has continued its expansion with us,” said Steven Durels, Executive Vice President and Director of Leasing and Real Property at SL Green.

Construction at the property is more than three months ahead of schedule and $100 million under budget.