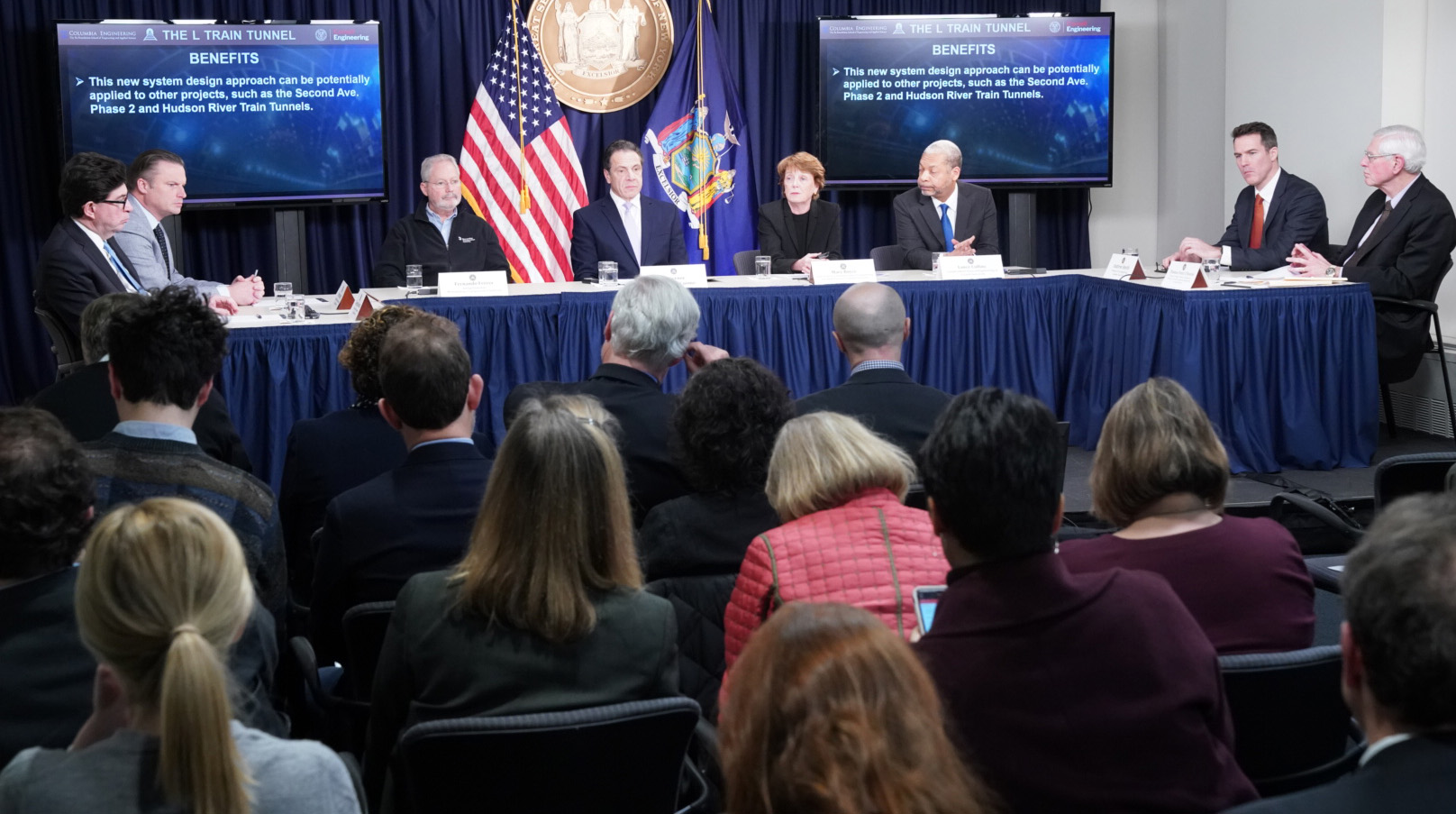 One of the New York engineers who came up with the revised plan for rebuilding the L train subway tunnels says its not just a faster option, but a safer one.

Andrew Smyth, a professor at Columbia University who was a part of a team of academics who helped devise the new plan, said jack-hammering 30,000 s/f of concrete under the East River — as was being proposed — carried inherent risk.

The alternative new plan would use a newer method of cable racking in which electrical work would be mounted to the subway walls instead of encased inside a concrete bench rack located on the subway floor.

As for the deteriorated existing bench rack — a concrete encasement that runs parallel to the train — contractors will either remove particularly damaged portions or repair sections using a fiber polymer, allowing contractors to forego time-consuming, costly, and potentially dangerous work of jackhammering the bench could result in damage to the train’s tunnel.

“Demolishing all of the bench wall was always going to be done by hand-operated jackhammers,” said Smyth. “Doing that over 30,000 feet does introduce more risk, [With the new plan] you’re less likely to damage the tunnel.”

Smyth — a specialist in sensor instrumentation and vibration analysis who has worked on iconic bridges and landmarks, including the Manhattan Bridge — said the new plan would also allow L train to run between boroughs during the day, shutting down only on nights and weekends, and carry a similar time table of 15-20 months.

“The [full] closure is going to be inconvenient; there’s noise and pollution, and extended commuting time which is going to spill over to other lines,” he said. “[The new plan] seems like there’s obvious upside.”

Governor Andrew Cuomo announced on Jan. 4 that he was re-thinking the long-planned 15-month shutdown of the L train between Manhattan and Brooklyn for critical repairs after receiving a report from the academics from Columbia and Cornell that leverages the design method used primarily in Europe.

Judlau Contracting and TC Electric had already been contracted to carry out the original $477 million contract. Now, the MTA will have to vet and approve the new plan with hopes of still starting working in April.
According to Smyth, a cost has yet to be worked out for the new plan. He said, “There is a drastic reduction in the ʻnon value added scopeʼ, but opening and closing is presumptively a less efficient way of conducting a demolition/construction project. I think most expect it to be cheaper given the massive reduction in ʻnon value added scope”, but that may be somewhat offset, by the disruptive start-stop nature of the schedule.”

For those in commercial real estate, the prospect of foregoing a total shutdown of the Brooklyn bound L train also represents a brighter future for business, even if uncertainty over the new proposal still looms large.

“Although we’re thrilled and we are breathing a sigh of relief, the new plan hasn’t been fully vetted and we only have the governor’s announcement and the limited information from the MTA,” said Chris Tepper, a Senior Project Manager at the Hudson Companies. “We’ll all feel 100 percent more comfortable when those plans are fully clarified with the nights and weekends.”

Nonetheless, according to Tepper, who is overseeing a mixed-use office project in East Williamsburg called The Breeze, Hudson Companies, which was braced for a full shutdown after signing onto build the 100,000 s/f development before the announcement that the train would stop running, qualifies the alternative as a win for The Breeze and buildings of its kind.

“To some extent this is just gravy for us,” he said. “It feels like we get to have our cake and eat it too.”

Others, like Aleksandra Scepanovic, managing director of Ideal Properties Group, say the biggest relief in finalizing a plan would be getting rid of the uncertainty that has shrouded the project since its announcement.

“If you think about it, there were so many alternatives brought to the table; from shuttle buses to the bikes, aerial gondolas, the East River skyway, inflatable tunnels, electric scooters, buses, luxury commuter vans…
“There was just a soup of ideas that happened after the shutdown. For all these years, local businesses have been going back and forth on what is going to happen and they had been living in that uncertain world for a while,” she said.

Scepanovic, who said that she has yet to witness any of the portended ill-effects of the train’s shutdown, said that she’s confident that the city won’t leave her borough blowing in the wind.

“In my mind, as long as I don’t have to go from one side of the river to another in a floating inflatable tunne, I think that everything else is a possibility,” she said.

“It doesn’t seem like the city was ready to drop the ball and leave [Williamsburg] desolate or off the map.”