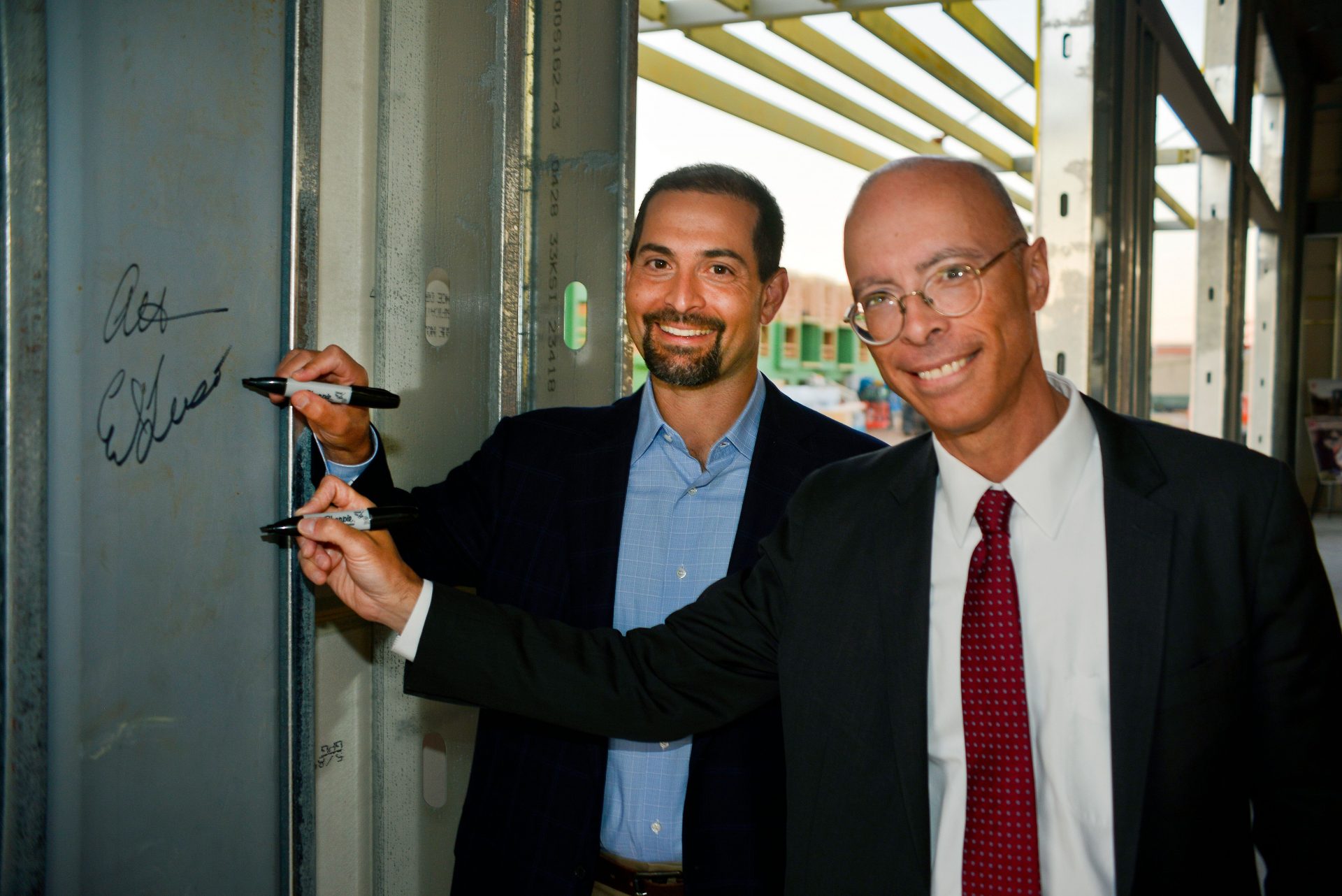 Construction to transform the site of the former “Bat Factory” property into Russo Development’s Vermella East, its third apartment community in Kearny, is underway.

The developer Edward Russo celebrated the groundbreaking for the 268-unit project during a ceremonial column signing event attended by Mayor Al Santos and other members of the Town Council last month.

Vermella East completed the final phase of Vermella Crossing, a 230-unit property within the Schuyler Avenue Redevelopment Area in July 2018, and Vermella West which consists of 280 units within the Passaic Avenue Redevelopment Area last Fall. Vermella East will be the second phase of Russo’s mixed-use redevelopment along the Passaic River. Russo also announced that it has contracted to purchase the American Strip Steel site which is planned for the third and final phase of its Passaic Avenue project, which is currently being designed and is scheduled to commence in 2021.

The six-acre Vermella East site, which had been vacant for over 30 years after a fire destroyed the former manufacturing facility in the late 1980s, will be redeveloped to feature studio, one and two-bedroom apartments. Amenities will include a resident club room and co-working space, fitness center, pool, dog run and other amenities in a 9,200 s/f clubhouse.

Situated near the Manhattan Bridge, this 166,976 s/f residential and retail project is now under construction following a recent groundbreaking. Led by a development partnership of Delshah Capital, OTL Enterprises, and START Treatment & Recovery Centers, 22 Chapel Street is among the first major properties underway in one of New York City’s newly identified federal Opportunity Zones.

Forty-five of the building’s apartments will be leased as part of the Affordable Housing New York program, with the remaining 135 apartments targeting rents affordable for working families.

According to the architects, 22 Chapel Street is emblematic of a new generation of towers rising across Brooklyn in that they break from more traditional rectilinear, glass-wrapped profiles.

“Our design for 22 Chapel Street responds to a unique site that serves as a gateway to Brooklyn and the many other new developments underway near the Manhattan Bridge,” said CetraRuddy founding principal John Cetra, FAIA. “Our goal was to capitalize on this highly visible location on Flatbush Avenue with an iconic form that brings fresh energy to the Brooklyn skyline, while offering dramatic views over McLaughlin Park next door, and long vistas to the Dumbo neighborhood and Lower Manhattan.”

The Chapel Street side of the building features a system of translucent fiberglass wall panels, creating a lantern effect to illuminate the street at night.

Building amenities include a rooftop pool and terrace, children’s playroom, fitness center, a bike room, and 88 underground parking spaces. In addition to residential uses, CetraRuddy’s design for the tower also incorporates retail space and 15,000 s/f of community areas, along with a new headquarters for the START organization. Completion at 22 Chapel Street is anticipated for 2021.

Sales have been launched at The Alexandra, a boutique condominium in Astoria located at 23-43 31st Road.

Developed by D10 Group and designed by TAN Architects, the five-story condo offers 25 modern residences paired with amenities. The first batch of listings are now live.

Based in Astoria, the Ko Team was selected to lead sales as the local expert backed by Triplemint real estate brokerage. This is the Ko Team’s first residential development as sales team of record.

Developed by D10 Group Inc., the residences range from one to two-bedroom homes. Amenities include a roof deck, fitness center, parking available for purchase and personal and bicycle storage. The state-of-the-art apartments are priced from the low $600,000’s. Located between Crescent Street and 23rd Street, the building is four blocks from Broadway Station on the N/W subway line.

“I congratulate the Megalith team on the completion of The Printhouse,” said New Rochelle Mayor Noam Bramson. “This grand opening expands the range of highest-quality, modern housing options for current and future residents of our community, and marks yet another positive step in New Rochelle’s exciting downtown revitalization.”

The 68,000 s/f building, which broke ground in August of 2017, features a range of studio, one and two-bedroom options, some with private balconies, offering premium finishes, and custom kitchens and bathrooms.

Designed by Magnusson Architecture and Planning with interiors by Gil Even-Tsur Architecture Workshop, the building features 3,000 s/f of ground-floor retail, a rooftop terrace, resident lounge, state-of-the-art fitness center, and covered surface parking. Residences at The Printhouse are outfitted with smart home technology and appliances, such as a premium Blomberg appliance package including an in-unit washer and dryer, wireless entry locks, and Ori walk-in closets in select units.

Heatherwick Studio has released new renderings of the company’s first residential building in the the United States.
Lantern House is a two-tower building developed by Related Companies flanking the High Line at 515 West 18th Street and connected by a sculptural glass lobby. One building standing 10-stories and the other 21-stories.
Named for its interpretation of the modern bay window, Lantern House is currently rising with occupancy anticipated in Fall 2020.

Designed by Heatherwick specifically for Lantern House, the lantern-shaped bay windows are featured in every unit and many have window seats for taking in the views of the Hudson River, the skyline, the High Line and Chelsea’s l architecture.

When sales launch in 2020, Related will introduce 181 one to four-bedroom condos featuring 10 ft ceilings. Pricing will start at $1.7 million.
Working in partnership with Related Sales LLC, Corcoran Sunshine Marketing Group is the co-exclusive marketing and sales agent.