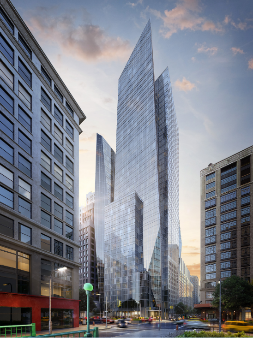 Wonder Works has picked noted New York City architect Karl Fischer to design a new 21-story luxury condominium they are bringing to the Upper East Side at 302 East 96th Street.

“We hired Fischer because we want this building to reflect the ultimate high-end design to serve an underserved market with affordable luxury,” said Eric Brody, principal of Wonder Works who announced back in March they will demolish the three level parking garage on the site and build a 75,000 s/f property with 48 high-end luxury apartments.

“The project is going to stand out in this neighborhood where there is a high demand for new condo construction,” said Figotin, who said the soon to be completed Second Avenue subway will also “attract buyers and raise values in the area.”

“400 Park Avenue South offers buyers the chance to live in a true work of art with inspiring city views,” said David Von Spreckelsen, the New York Division President of Toll Brothers City Living.
“The homes offer a fabulous lifestyle with unique and spectacular spaces, fantastic amenities and immediate access to some of the finest retail, dining and activities in New York City.”

Featuring modern and elegant interiors designed by Stephen Alton, two model homes at 400 Park Avenue South have been opened. The three-bedrooms are listed on the market at $4,899,990 and $5,999,990.
The building is expected to be completed in fall 2015.

Four Winds Real Estate has begun marketing and leasing its Lower East Side redevelopment, The Madison, at 207 Madison Street.

The six-story building comprised of 22 units has been fully renovated with new hallways, hardwood floors, as well as stainless steel appliances in granite kitchens.

The building features The Under Club, a tenant-only lounge containing a unique work-play environment which includes a vintage game room, bike storage and co-working space.

Miron Properties is the marketing and leasing agent for the Madison where two- and three-bedroom apartments range in price from $3,400 to $4,500.

“The Lower East Side continues to transform into one of the most dynamic neighborhoods in Manhattan. We are pleased to deliver unique amenities and superior service that is distinct in this thriving location,” said Joshua Landau, co-founder and managing principal, Four Winds Real Estate.

Jeffrey Schleider, founder and CEO, Miron Properties, added, “At an affordable price point, our new residents will have access to a phenomenal Lower East Side location and an amenity package.ˮ

Brown Harris Stevens announced that 349 and 349A State Street, the first two of seven newly-built townhomes on State Street in Boerum Hill, are now on the market.

The design of each property features countless bespoke finishes including Scavolini kitchen, custom bath cabinetry, solid oak flooring, detailed base and crown moldings with coffered ceilings and a custom recessed lighting and electronics grid that can be easily expanded to the most high-tech needs of the discerning buyer.

The three single-family homes feature double height living spaces, three bedrooms and 3.5 bathrooms.
The four two-family residences each have four bedrooms, 3.5 baths, as well as a luxury garden level with one bedroom apartment.

Developers IBEC and Strategic Development Corp, have brought together the latest innovation in green technology and the highest building standards targeting a LEED Gold certification. The builders included an aggressive energy package which is shown to be about 25 percent better than code and 10 percent improvement beyond Energy Star ratings. The homes are equipped with LED lighting throughout.

No relief in sight as rents soar