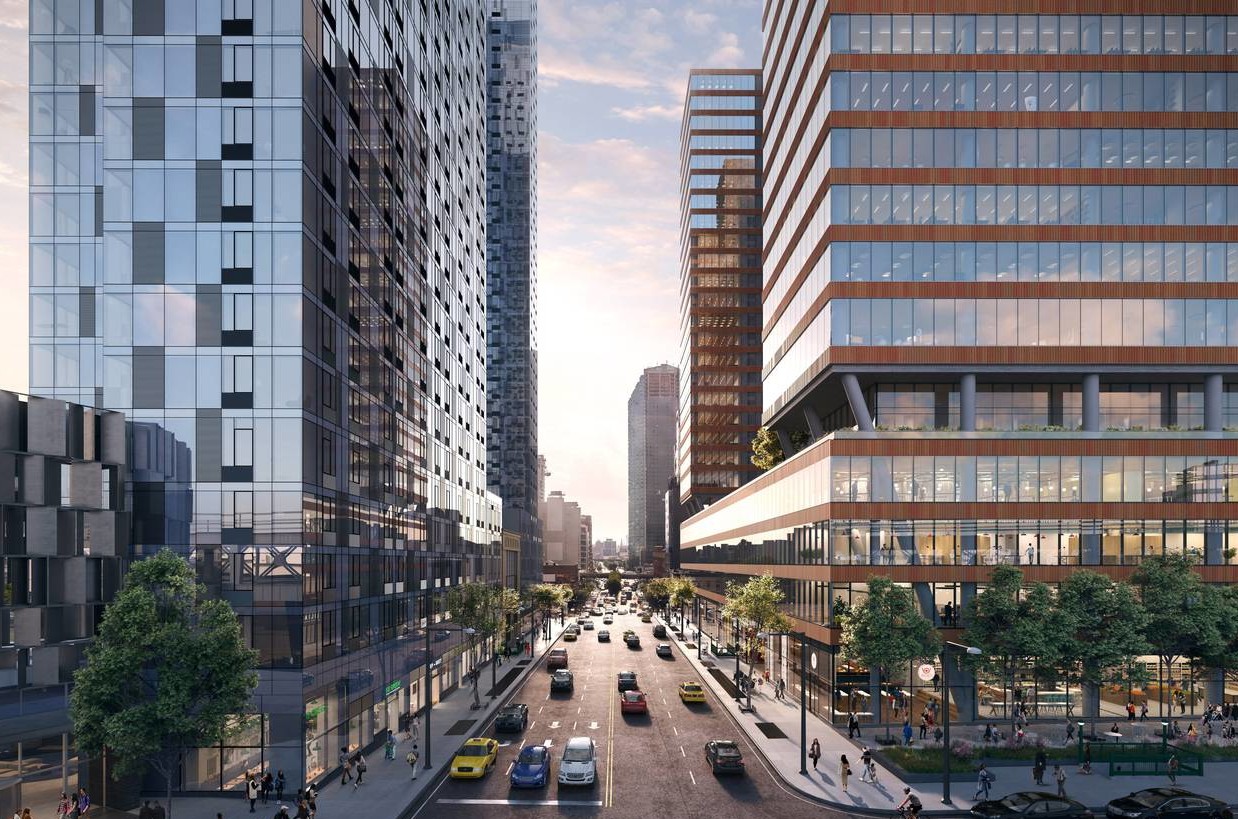 Elad US Holding and Mi&Co Development have tapped Douglas Elliman Development Marketing to lead the exclusive sales and marketing efforts for Charlie West.
The Velazquez-Lorber Team and The Patty LaRocco Team will lead sales at the 123-unit building at 505 West 43rd Street. Kurt Bauccio was named director of sales.

With architecture by ODA New York and interiors and amenities by Andres Escobar, Charlie West comprises two 16-story towers anchored by a courtyard.
Each of the studis to four-bedroom penthouses offers open-concept living areas, some with terraces. Amenities include a resident lounge and library, indoor pool, fitness center and glass-enclosed “bike box” for bike storage.
Pricing begins at $855,000 for a studio to $4,500,000 for a three-bedroom penthouse. Completion is slated for early 2019.

The new Shorecrest Towers feature upgraded studio-to-three-bedroom apartments designed by designer Andres Escobar to maximize ocean or city views. Upgrades and enhancements to the community’s amenities and common areas include a new lobby, fitness center and resident lounge.
The renovation of Shorecrest Towers brings Cammeby’s closer to realizing its vision for the creation of a new residential, shopping and commercial district that creates connectivity throughout Brighton Beach and Coney Island, called Neptune/Sixth.
Currently under construction, Neptune/Sixth encompasses a free-standing office and retail building at 626 Sheepshead Bay Road that is scheduled to be completed by year’s end, as well as 532 Neptune Avenue, a mixed-use retail and luxury rental apartment building, for which work has also commenced.
“As we make progress on creating a new neighborhood destination for retail and businesses, our investment in enhancing Shorecrest Towers will ensure that we are providing an improved living experience for area residents as well,” stated Jacob Cohen, executive vice president of development at Cammeby’s. “
Situated between Coney Island, Sheepshead Bay and Manhattan Beach, Shorecrest Towers is a block from the boardwalk and beach and within walking distance of the Q subway line and B1 bus stop.

Flatiron Real Estate Advisors, Duke Equities and MJM have launched sales at 62-66 North Third Street, a boutique condo in Williamsburg.
Located between Kent and Wythe Avenues, the development consists of 13 residences between two buildings.
David Dweck, principal of Duke Equities, said the development “caters to the ever-growing population of families looking to set their roots in the area.”

While the exterior of each building appears identical, the interiors feature their own unique design themes.
62 North Third has eight homes – a mix of one-, two-, three- and four-bedroom residences. 66 North Third features five full-floor residences, with direct key-lock elevator access.
Each building has second floor home with an open 1,200 s/f terrace, located right off of the kitchen and living room area.
The development’s two three-bedroom penthouses, one in each building, have outdoor space spread over two levels. Each has a terrace off of the living room with a bi-fold door, and an upstairs solarium that leads out to a private 1,100 s/f roof deck.
Designed by SRA Architecture and Engineering (SRAA + E), each building has its own lobby. Interior designer Kimberly Peck curated the interiors. MNS is the exclusive sales and marketing firm on the development. The project is scheduled to be completed by December 2017, with pricing starting at $1.1 million.

Tishman Speyer has unveiled the amenity offerings and design for Long Island City’s Jackson Park (pictured top) coinciding with the start of leasing.
The trio of glass luxury rental towers feature partnerships with health and wellness expert Jay Wright of The Wright Fit and the design teams at Clodagh Design, HMWhite Landscape Architects, Mack Scogin Merrill Elam Architects and Hill West Architects.
Clodagh Design executed the interior design for the lobby and common spaces of the first residential tower and the development’s signature offering – a standalone five-story, 45,000 s/f amenity clubhouse dubbed The Club at Jackson Park, which will overlook the private park.

The Club will have exclusive access for residents and below grade connectivity to each of the three residential towers.
It has a lounge, demo kitchen, private dining and conference room, a game area with golf simulator, poker table, billiards, foosball and flat screen television, and a fully equipped tech bar.
Adjacent to the lounge is an outdoor patio and lounge outfitted with a wet bar, hanging garden and shuffleboard.
The second level of The Club features a fitness studio curated by Jay Wright. On the third floor there is a spa, sauna and steam rooms, a meditation lounge and changing rooms. A 75-foot indoor lap pool, full size basketball/volleyball and squash courts take up the the fourth floor.
The Club is topped by a rooftop with an outdoor social pool and hot tub surrounded by cabanas.
Each tower also has its own Skydeck amenities including an outdoor roof terrace, party room and lounge and children’s playrooms.

HMWhite conceptualized the almost two acre private park, which includes a children’s playground, dog park, bocce court, barbeque grills, picnic tables and outdoor ping pong.
Jackson Park will offer studio to four bedroom homes, with net rents starting at $1,915-a-month for studios, $2,335-a-month for one bedrooms, $3,555 for two bedrooms, $4,745 for three bedrooms and $7,310 for four bedrooms.
Move-ins for the first of the three towers is slated for January 2018. Citi Habitats New Developments is managing all leasing and marketing efforts.