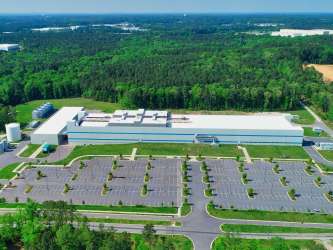 The $1 billion Marcy Nanocenter will be built on the SUNY Polytechnic Institute campus near Utica.

“This partnership is vital to strengthening the research and scientific assets that New York State needs today to attract the high-tech industries and jobs of tomorrow,” said Governor Andrew Cuomo of the state’s partnership with Cree.

This is a crucial step in cultivating the advanced manufacturing infrastructure of New York State, growing the upstate economy and transforming the future of the Mohawk Valley.

The effort helps to develop an advanced manufacturing-oriented workforce development initiative across the SUNY system to prepare a 21st century workforce for the long-term, high-quality employment and advancement opportunities the new facility will present.

Over six years, Cree will invest at least $1 billion through the construction of a state-of-the-art, highly automated silicon carbide fabrication and the installation of newly acquired and relocated machinery and equipment in Marcy. As the utilization of the silicon carbide fab’ grows, Cree will seek to fit-out and equip the fab.

New York State will provide $500 million in performance-based, capital grants from Empire State Development to reimburse a portion of Cree’s costs of fitting out the new facility and acquiring and installing machinery and equipment, as well as $1 million in Excelsior Jobs tax credits.

During construction of the Marcy fab, which Cree has agreed to perform subject to prevailing wage requirements, Cree will also lease space on the SUNY Poly campus in Albany.

In addition to the more than 600 direct jobs to be created within eight years, the project is estimated to generate approximately 570 indirect jobs and over $4.3 billion in total statewide economic impact over the next 20 years.

Silicon carbide is at the core of helping to power high-growth markets, such as the move from internal combustion engines to electric vehicles (EVs) and the rollout of ultrafast 5G networks. Silicon carbide-based power electronic devices offer significant efficiency, reliability and performance.

For applications like EVs, this enables greater system efficiencies that result in electric cars with longer range and faster charging, while reducing cost, lowering weight and conserving space.

Mohawk Valley EDGE, which has been instrumental in transforming the Marcy Nanocenter property into a “shovel-ready” site that meets the highest semiconductor standards while also aggressively marketing the site, will sublease the parcel to Cree under a 49-year lease.