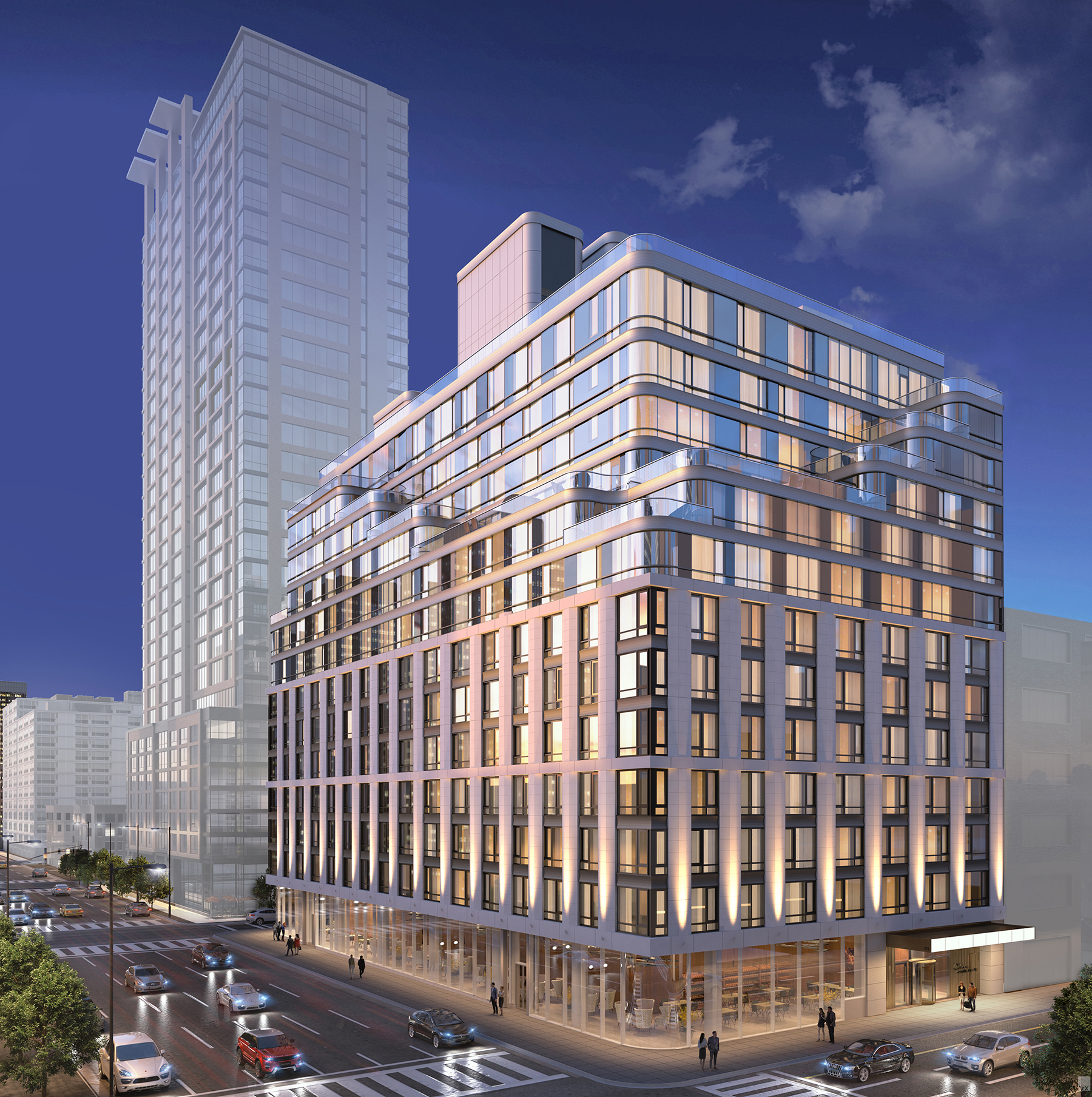 In the developing area of Hell’s Kitchen where walk-up apartments are being traded up for big glassy luxury condos, The Moinian Group is hoping its new Oskar rental tower will strike a happy medium.

“Oskar is the perfect addition to the continually growing and dynamic Far West Side neighborhood,” said Mitchell Moinian, senior vice president the company founded by his father, Joe, in 1982.

“As one of the first developers to realize the potential of this neighborhood, we’re proud to continue to bring sophistication, modern design and world-class amenities to the residential market.”

The building was designed by CetraRuddy, who infused a terracotta base with a mostly glass exterior starting from the eighth floor up. Glass hallways curve and jut beyond the building’s base, creating an “illusion of the building floating off of the sidewalk.”

“Being in this area, we’re surrounded by glass towers,” said Jacob Entel, a leasing associate with Moinian Group. “We wanted to bring something a little more creative looking to the neighborhood.”

Stepping inside, residents are welcomed in a lobby of earthy, neutral colors with a pop of color from royal blue couches. Artwork is featured throughout the building, including sculptor Arik Levy’s crystalline piece outside the lobby and paintings by Phillip Michaels in hallways.

Like the lobby space, the Oskar Club, or the amenity area of the building, features that same splash of blue chairs in an open and warm space.

Residents pay a fee to get access to the Oskar Club, which includes its co-working space, a TV lounge area, fitness center and office space, all if which is meant to act as an extension of one’s apartment, according to Bold New York’s Grady Dunning, the leasing director for Oskar.

Outside the Oskar Club, residents will have access to a 24-hour concierge, a private bus that will ferry them up and down 42nd Street, and the Oskar app, which allows residents to contact building management digitally.

Technology played an important role in designing Oskar. Tenants will have keyless entry and building-wide Wi-Fi provides them with their own private network.

According to Entel, the building was designed for people who are looking to find a home instead of hopping around from apartment to apartment.

Thirty-three of the residences have private terraces, but all residents will have access to the landscaped garden terrace called The Patio and the rooftop terrace that offers views of the Hudson River and the neighborhood.

The apartments themselves were designed with efficiency in mind and closets, drawers and shelves are incorporated in every possible space. Apartments have central heat and air, Nest thermostats, Bosch appliances, and walk-in closets with motion sensor lighting.

According to Dunning, the apartments were designed to enhance each separate room as a way to evoke suburban house as opposed city apartment living.

“What we found is in a lot of two-bed units around here and in New York, you open the front door and you enter directly into a living room or a kitchen and it doesn’t feel quite as homey,” Grady said. “Whereas this is a space where you can step in, take your coat off, all that stuff and then actually enter your home.”

Developers conquer whatʼs left of a rugged landscape across the Hudson