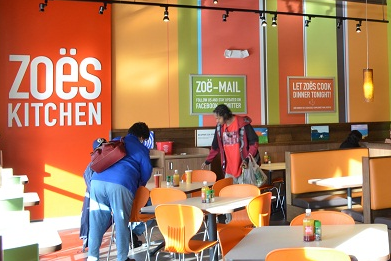 As consumers purchase fewer goods and spend more dollars on activities, retail property managers have learned to lure crowds by adding daily needs stores and experiential retailers to the tenant mix at malls and shopping centers.

Restaurants fit both criteria, fulfilling consumers’ need for sustenance while providing a form of entertainment.

Food culture is ever-changing, however. Restaurants that seemed perpetually at maximum seating capacity a few years ago, may lose customers to today’s newest formats and brands.

Success for eateries, their landlords and their dining patrons depends on the restaurateur’s ability to match the menu, pricing and format to the preferences of the restaurant-going public.

And change is in order. Baby boomers dominated restaurant spending for more than two decades, particularly as empty-nesters redirected incomes from dependent children to their own enjoyment, including dining out more often.

If you enjoy Olive Garden, Chili’s and other full-service establishments, you can thank boomers for feeding that segment’s proliferation before the 2007 recession. The financial crisis slashed restaurant spending for many households. Incomes have recovered somewhat 10 years later, but boomers are moving into retirement in greater numbers and dining out less. As a result, the customer base is shrinking for the full-service restaurant chains that boomers helped to grow.

Enter the millennials, a massive base of potential customers exhibiting a tendency to dine out more frequently than their predecessors.

These young adults are earlier in their careers, however, and less likely to command the level of disposable income that fueled boomers’ entertainment habits. These and other differences have contributed to a new set of consumer preferences that restaurants must serve to succeed.

Let’s look at where this cultural evolution is taking food service, red-flagging concepts that are losing favor and highlighting some of today’s hot formats.

High-end in deep water. Few corporate spending accounts fully recovered from the Great Recession, and many companies have tightened purse strings again following more recent events. This has curtailed spending at high-end restaurants, compounding the effects of boomers eating more meals at home. In Houston, for example, sales at many high-end establishments are down about 10 percent from before the energy crisis.

Fast-casual’s fast-growing following. At Zoës Kitchen, MOD Pizza and other fast-casual restaurants, counter service eliminates the expectation of a tip for wait staff, shaving 20 percent off the customer’s cost no matter the menu. Many millennials have embraced the trade-off of reduced server attention in exchange for a lower price on a high-quality product, which is a boon to frequent diners and anyone watching their spending.

Burgers, pizza and tacos. The ongoing counter-service craze took hold in the 2000s with the gourmet burger phenomenon. Smashburger, Shake Shack, Five Guys and an assortment of similarly strong players prove premium burgers retain a strong following today, although the pace of new store openings is tapering. Gourmet pizza and specialty taco chains have followed similar arcs, with a slowing pace of openings.

Consumers haven’t had their fill of fast-casual concepts – far from it. It seems every large-format, full-service chain is investing in smaller, counter-service incarnations of its restaurants. By eliminating server tips and simplifying their furnishings, these new restaurants are delivering the menus that have already won over customers, but at a lower cost to the store and its clientele.

As we approach 2018, concepts that have found regional success are rolling out national campaigns. Seafood, for example, is finding its stride as SlapFish Restaurant, California Fish Grill and others spread eastward from California, and poke chains extend their reach from Hawaii to mainland markets.

Up next: High-end reinvented. Millennials generally place a higher value on environmental responsibility and sustainable practices than previous generations. In the foodie world, that suggests young diners will flock to restaurants that promote use of organic, locally grown produce in menu items, if those selections fit millennials’ more modest budgets.
Marrying farm-to-table dishes with the fast-casual model will go a long way toward bridging that price gap, so look for entrepreneurial restaurateurs to begin rolling out health-conscious concepts in your market.