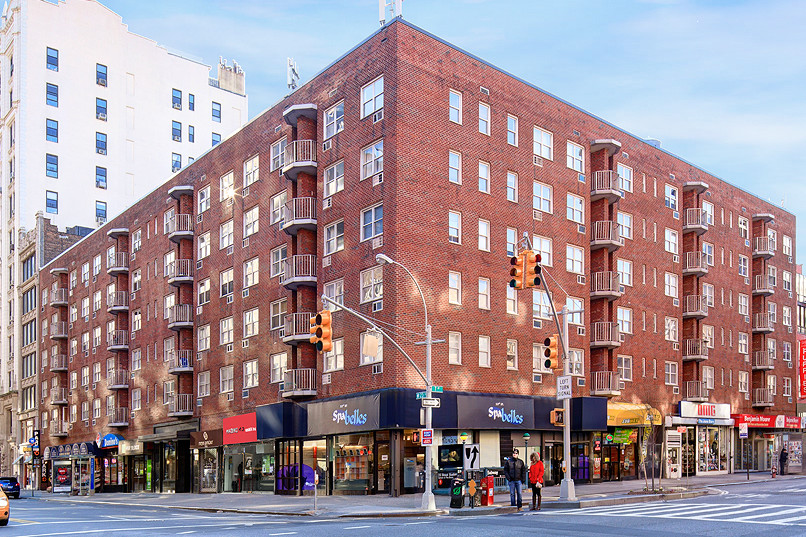 Madison Realty Capital (MRC) has tapped Chris DeCrosta as the exclusive leasing agent for the landmarked One Hanson Place retail property.
The more than 40,000 s/f retail condominium sits at the base of the 37-story, 512 ft. tall One Hanson Place property in the Brooklyn Cultural District.
One Hanson Place was originally built as the headquarters for the Williamsburgh Savings Bank. MRC purchased the property in a joint venture with private equity investment firm Siguler Guff in 2015, and embarked on a capital improvement plan to modernize the grand banking hall and bank vault into a premium retail asset.
The partnership received approval from the Landmarks Preservation Commission to implement interior alterations consistent with the original design of the building, which included improving the floor circulation, extending the bank vault ceiling height and restoring the building’s historic metal and stonework.
With the capital improvement plan nearing completion, retail leasing at the property is now underway.
The property’s 40,000 s/f retail space is ideal for a single brand looking to establish itself in the market, according to MRC.
The ground floor banking hall features a 63-foot vaulted ceiling and floors inlaid with 22 varieties of marble. Upstairs a series of mezzanines overlook the banking hall, and the lower level is anchored by three 64-ton doors that open to the historic bank vault.
“This celebrated Brooklyn property has a storied history and we are proud to reintroduce it to the market as a premier retail asset,” said Josh Zegen. “
According to DeCrosta, who recently founded his own firm, Good Space, “The capital improvement program has opened up the space for modern use and restored the historic details of One Hanson Place and we’re anticipating strong interest with a number of retail tenants.”

The founders of the Drunken Munkey, a bar/restaurant inspired by colonial British India, will be opening another location at 31 Cornelia Street, a space formerly occupied by Pó.
Eastern Consolidated senior director James Famularo and director Ravi Idnani arranged the 800 s/f, 12-year lease on behalf of the tenant, MACC Hospitality.
Avi Akiva, of KSR represented the landlord, S.W. Management.
MACC Hospitality partners Arun Mirchandani, Raju Mirchandani & Chirag Chaman are the team behind the new bar/restaurant at 31 Cornelia Street as well as the Drunken Munkey on the Upper East Side; Le Bateau Ivre, a French bistro in Midtown East; and Bar and Books, an upscale cocktail lounge chain established in 1990, which has two locations in Manhattan, two in Prague, and one in Warsaw.
“Although there were multiple offers for the retail space at 31 Cornelia Street, the landlord was impressed with the successful track record of Arun, Raju, and Chirag who together have 65 years of experience in the food and beverage industry and have owned and operated bars and restaurants for over 25 years,” Idnani said.

Cushman & Wakefield arranged a long-term, 2,300 s/f lease for Dig Inn, a seasonal, farm-to-table food chain, at 412 Greenwich Street in Tribeca.
A team led by Managing Director Brandon Singer and Associate Matthew Ball represented the landlord, 412 Greenwich LLC.
“Securing Dig Inn was a great opportunity for the landlord, as the restaurant’s popularity will help attract a cotenant for the remaining 1,550 s/f of space on the ground floor,” said Singer .
Dig Inn will be taking space at the base of 412 Greenwich Street, a newly built property on the corner of Laight Street. The space will feature 90 feet of wraparound frontage, and the property is fully vented and features new construction.

Westside Market, a family-owned and operated specialty food retailer, has signed a 20-year lease to establish its second Chelsea location at Jack Resnick & Sons’ retail condominium located at 170 West 23rd Street (pictured top).
The new 8,000 s/f store, will be located at the base of the Chelsea Seventh condominiums between Sixth and Seventh Avenues. It will officially open in spring 2018.
Situated directly adjacent to the 23rd Street “1” train subway stop, 170 West 23rd Street was built by Jack Resnick & Sons in 1975, and is already home to such retail tenants as Janovic Paint & Decorating, Spa Belles, Dominos Pizza, Subway, OMG Jeans, HHK Sushi & Tea and Man Made Barber.
According to Jack Resnick & Sons’ Managing Director Fran Delgorio, only two retail units remain available for lease at the property – a 1,600 s/f space with 20 feet of frontage on 23rd Street, and a 3,780 s/f space with 29 feet of frontage on Seventh Avenue.
Westside Market was represented in the transaction by Craig N. Slosberg, formerly of Jones Lang LaSalle (now with Newmark Knight Frank). Building ownership was represented in-house by Delgorio as well as Brett Greenberg.

The CPEX Retail Leasing Team has completed a lease agreement at 181 Pacific Street with Club Pilates.

With 192 active studios across the United States, this will be their first studio in Brooklyn.
The incoming tenant signed a ten-year lease and is scheduled to open by early 2018.
Club Pilates will occupy 1,400 s/f out of a total of 4,200 s/f of available retail space at this location in Cobble Hill. The asking rent for the remaining space is $100 per square foot.
“Club Pilates is a terrific addition to the Cobble Hill section of Brooklyn”, said Ryan Condren, Managing Director of the CPEX Retail Leasing Team.
“The trend of side street retail in this area continues to grow as they join other great operators such as Warby Parker, Aesop, Bar Method, DryBar and Blue Bottle. We look forward to bringing them another great co-tenant in the 2,800 remaining square feet, adjacent to their new location.”
CPEX’s Retail Leasing Team, consisting of Managing Director Ryan Condren and Associate Director George Danut, represented the landlord in the lease transaction. Andrew Clemens and Ben Weiner of Ripco Real Estate represented the tenant.