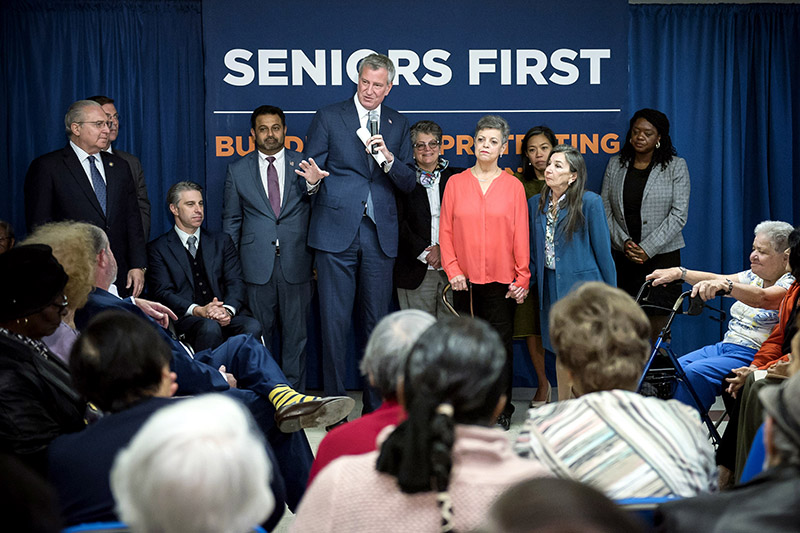 Mayor Bill de Blasio yesterday announced “Seniors First,” a slate of new affordable housing programs that will increase the amount of senior housing across the city.

In total, the city will double its commitment to senior housing over the extended 12-year Housing New York plan, serving 30,000 senior households by 2026.

The number of seniors in New York is projected to grow 40 percent by 2040. To meet the housing needs of older New Yorkers on fixed incomes, the city will invest $150 million to make more homes accessible to seniors and people with disabilities; build new 100 percent affordable developments on underused NYCHA, and public and private sites; and preserve aging senior housing built as part of HUD’s 202 program.

“The federal government has gotten out of the business of building senior housing, so New York City is jumping into it in a big way. We won’t let seniors be pushed out of the neighborhoods they helped build,” said Mayor de Blasio.

Along with the Neighborhood Pillars program and the Mitchell-Lama Reinvestment Program, “Seniors First” is the third new initiative announced as part of the Mayor’s plan to accelerate the creation and preservation of affordable housing across the city by financing 200,000 affordable homes by 2022, and expand that goal to 300,000 affordable homes by 2026 – enough to house the entire population of Boston. In a press release, the city said “Seniors First” is needed to address the shortage of affordable housing for low-income seniors, who are the most rent-burdened and more likely to live on fixed-incomes than other New York City populations.

Through a multi-pronged strategy, the City will serve senior households by making 15,000 homes “age-friendlyˮ through improvements such as installing lever door handles and shower bars and widening doors to make bathrooms and kitchens wheelchair-friendly.

HPD will develop 4,000 new affordable senior homes through its Senior Affordable Rental Apartments Program. And the city will protect 6,000 senior apartments Protected: For decades, the federal government built hundreds of senior housing developments across the city through the HUD 202 program. These buildings are privately owned and operated, and many face physical deterioration that threatens their affordability. The City will target those properties most in need of protection, making repairs and providing long-term financing in exchange for continued affordability.

Daniel Moritz, principal of The Arker Companies, said, “We commend the Mayor and his phenomenal team of housing professionals for doubling down on their commitment to affordable senior housing.”