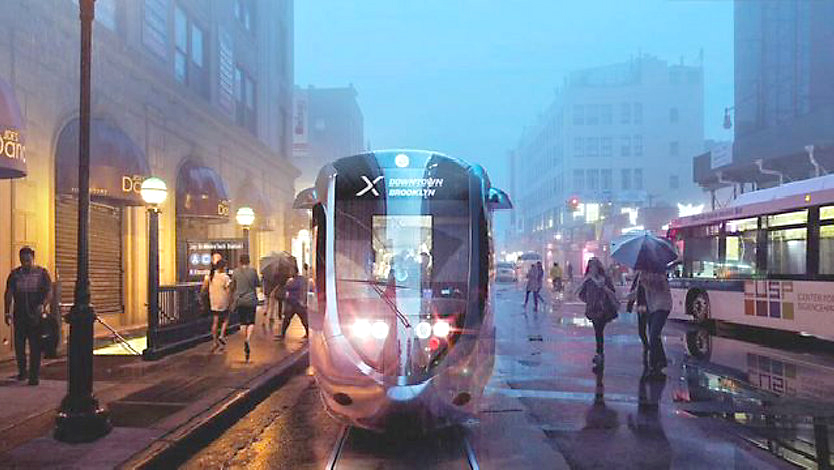 “With the BQX, New York City is taking an intelligent, 21st-century approach to infrastructure planning, demonstrating that our city can still take on big projects,” said Scissura. “The value capture model is a proven approach to reducing the budget impacts of large-scale infrastructure construction. We are excited about how this project can create equitable, sustainable economic growth along the waterfronts of Queens and Brooklyn, as well as its ability to create a blueprint for other projects going forward.”

The de Blasio Administration announced last Friday that it will move forward with the Brooklyn Queens Connector (BQX) streetcar following the completion of a two-year feasibility study.

Despite two decades of rapid growth in population and jobs on the Brooklyn-Queens waterfront, public transit has not kept pace.

At full implementation, the state-of-the-art streetcar will increase public transit options for neighborhoods with over half a million New Yorkers living and working along the growing Brooklyn-Queens waterfront corridor, including 40,000 New York City Public Housing Authority residents.

“The Brooklyn-Queens waterfront has experienced incredible growth. Now it’s time for our transit system to catch up,” said Mayor Bill de Blasio. “The BQX is one of the biggest, most ambitious projects in a generation. It will be a challenge, but New York City is taking it on.”

“BQX taps into state-of-the-art transit tech to respond to and build upon the evolution of the Brooklyn Queens Waterfront,” said Deputy Mayor for Housing and Economic Development Alicia Glen. “With more than half a million people now living and working along the projected line and further growth to come, BQX will transform how our city moves.

Construction and implementation of the streetcar is estimated to cost $2.73 billion and generate $30 billion in economic impact and approximately $1.4 billion in value capture to finance its construction.

The City announced it will seek federal funding, among other sources, to deliver the project. First-year ridership is expected to be 50,000 per day.

“The BQX has the potential to be an integral part of our city’s expanding transportation system. It will complement and connect to our subway and bus system, the NYC ferry, and bike share, while transforming city streets.”

Community stakeholders will have opportunities to provide input as the proposal advances to the environmental review and advanced design stages. The City will also further analyze project delivery methods, streetcar operations, and project implementation.

The environmental impact study process will commence this winter, followed by ULURP in 2020. Construction is expected to begin in 2024 and end in 2029.

Since the Mayor announced the proposal at a State of the City address in 2016, the BQX City team has studied key aspects of designing, building, and operating a streetcar service. The study was conducted through a community meetings and input from elected officials and community organizations along the corridor.