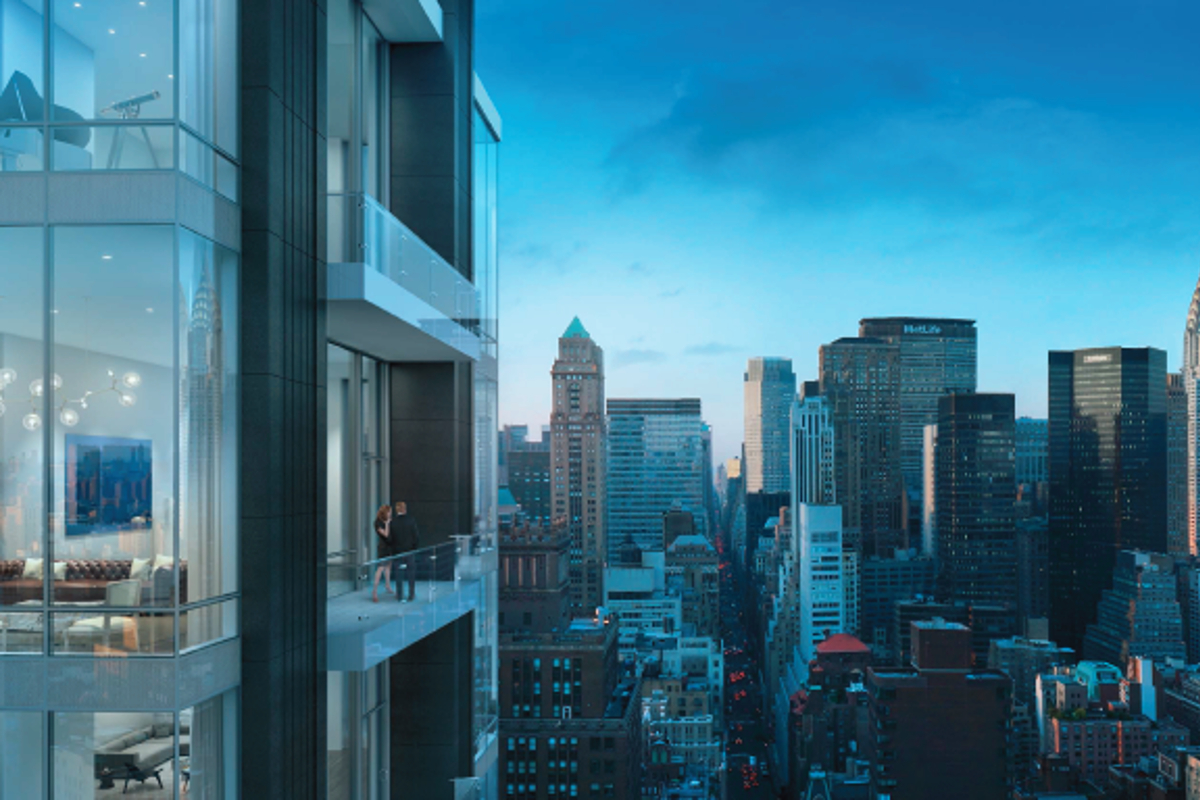 New York City’s stock of mansions is expanding beyond massive Fifth Avenue homes that are attached to names like Carnegie and Vanderbilt.

172 Madison Avenue, a 33-story condo building in Midtown, contains a $13 million apartment called “The Mansion” that comes fitted with one of the largest private swimming pools in Manhattan.

“We call it a mansion because that’s what we felt it is. It’s a mansion inside the city. That’s what really this apartment is. It’s a big home with a great patio and a great garden with your swimming pool, and it’s inside Manhattan with the services of a condo,” said Efraim Tessler, a broker for Keller Williams.

Going against the usual strategy of inserting the most luxurious apartment on top of the building, Tessler Development placed one of its most expensive full-floor units on the third floor, with the 50 by 8 ft. pool sitting in the middle of a 3,284 s/f terrace.

“Not everybody who wants a penthouse or who wants a spacious apartment necessarily wants to live up on the 30th floor. To walk three flights up is manageable. Just not everybody that needs a big space really wants to live high up in the sky. The thing I love about this city is people. I love the action and the movement. When you live on the 20th, 30th floor, there’s no movement and action other than the clouds,” Tessler said.

In spite of this, Tessler Development did not completely ignore the desires of wealthy buyers who prefer to wake up with the clouds.

The building is topped with a three-story apartment called the Sky House, which contains 5,623 s/f of indoor space and a 2,932 s/f terrace. The apartment also contains a living room with ceiling heights of 23 feet and a balcony fitted with a roof deck, a swimming pool and a Jacuzzi.

Underneath the Sky House are four penthouse units with 18-foot ceilings. The four-bedroom, four-and-half-bath apartments contain 3,548 s/f of indoor space and a 353 s/f terrace. Penthouse B, which is currently on the market, is priced at $14.5 million.

The building, which sits on the corner of Madison and 33rd Street, features a glass façade with black metal panels, making it an anomaly in a neighborhood known for Art Deco buildings.
In spite of the modern look, Tessler said that the tower was designed with respect to the neighborhood’s design scheme.

“We wanted to respect the nature of the surrounding architecture as well as have a modern building,” Tessler said.

“So you’ll see, we have mainly glass because it’s residential so you want the light and the air. But we definitely are respecting the surrounding neighborhood, which has these older art-deco buildings. We tried to respect that as much as possible with these vertical stone columns.

However, Tessler insists that the building’s selling point is the content of the apartments. “The finishes are solid materials that are timeless,” he said. According to Tessler, the finishes in each apartment are consistent from the one-bedrooms to the penthouses.

The interiors, which were designed by interiors firm Shamir Shah, include Miele ovens and dishwashers, Subzero wine storage and heated bathroom floors. “We designed it for the penthouses, and we’re giving it to the one-bedrooms. That’s really what it is. It’s the same finishes you have throughout,” Tessler said.

The building is near topping out, with Tessler estimating this for the next week or so. Residents will get to move into their apartments in October to November.

According to Streeteasy, 20 of the building’s 69 apartments are already in contract, with most of the sales for one and two bedroom units.

Prices range from $1.7 million up to the Skyhouse, for which the price has not been released.