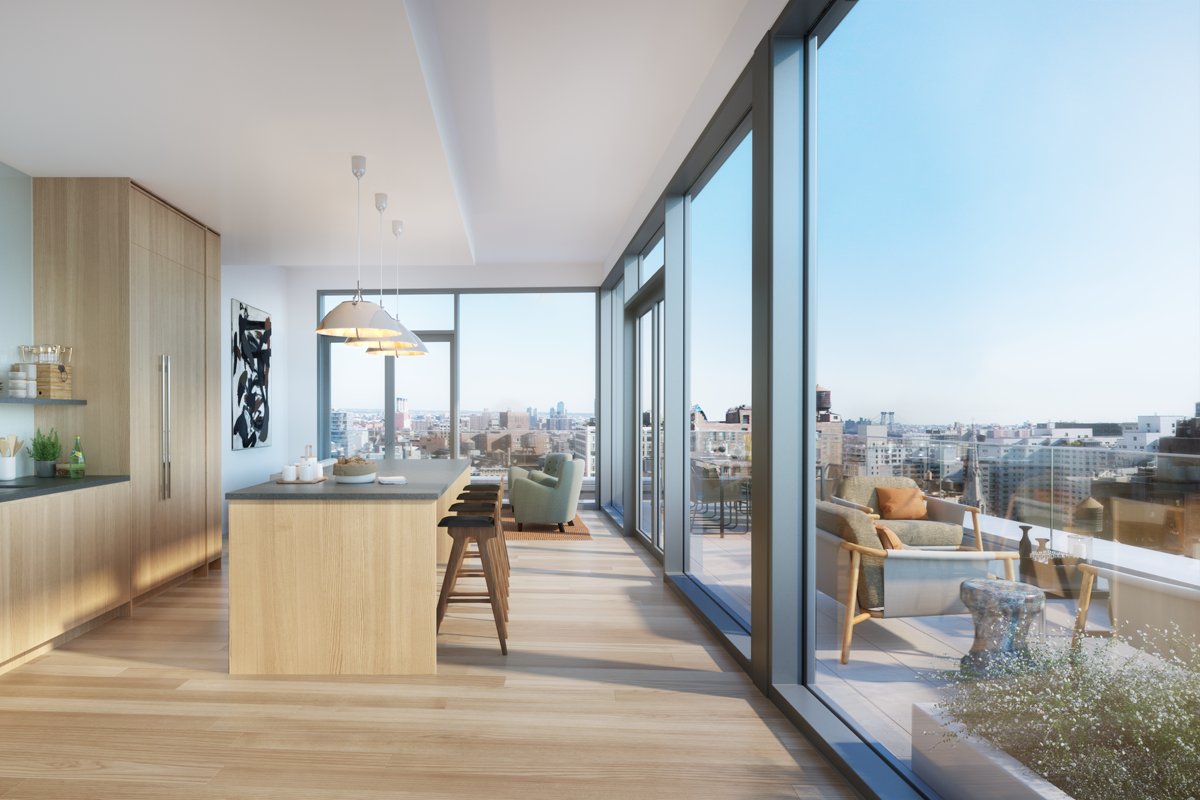 Rising 23 stories above 12th Street and University Place, to say that 21 East 12th Street stands out would be an understatement, with its tall stature and modern design drawing stark contrasts to the collection of old, low- and mid-rise structures that make up most of Greenwich Village.

However, it’s not the roof or the duplex penthouses that make this building truly unique, though they promise to be quite impressive once complete next year. What separates this building from others in the bustling Union Square area sits 20 stories below.

Atop the two-story retail space at the building’s wide base, roughly 6,400 s/f of mostly green outdoor terrace will wrap around the narrower, residential portion of the tower, nearly equaling the square footage of the third-floor townhouses it encircles.

Hicks, who is leading the marketing campaign for Corcoran Sunshine, said prospective buyers have been drawn to the building because of its close proximity to transportation — there are eight subway lines within a quarter mile and five others as well as a PATH entrance within 0.3 miles — retail, restaurants and markets.

“The neighborhood is prime Greenwich Village,” he said.

Views have also proven to be a significant enticement for the building, which already is 75 percent sold. With its height and central location, the building’s higher floors provide vistas of Union Square, Midtown South and the heart of the Village.

Built on top of the former Bowlmor Lanes location, 21 East 12th is the first residential development of the William Macklowe Company, which is headed by Billy Macklowe and not to be confused with Macklowe Properties, which is owned by his father, Harry Macklowe. Goldman Sachs is an equity partner and M&T Bank helped finance the project on 12th Street.

The younger Macklowe’s portfolio includes properties at 156 Williams Street in the Financial District as well as 311 West 43rd Street. He said he wanted to make sure his development at 21 East 12th Street complemented the thriving Greenwich Village without tarnishing the area’s historic aesthetic.

“It was important for us to design and develop a building that enhanced the surrounding landscape of Greenwich Village, which, is one of the most sought-after neighborhoods in New York,” Macklowe said. “21 East 12th Street is unique in that it is set back on an outdoor garden podium combining exceptional architecture while maximizing light and views for owners.”

To do this, Macklowe hired renowned architect Annabelle Selldorf to craft the building inside and out. To match historic buildings in the area, such as the Con Edison Tower on 14th Street, WMC applied a “modern take on limestone,” also known as concrete, to the tower’s exterior, Hicks said.

Above the terrace residence — which was intended to be two separate 3,300 s/f, four-bedroom townhouses before they were purchased by a single buyer and combined into one — are another 50 condos ranging from 1,006 s/f single-bedroom units that start at $2.55 million to 2,679 s/f four-bedrooms for $5.5 million.

Every floor features 10-foot-high ceilings with the exception of the townhouse, which reaches 11 feet. They also feature tall, double-hinge windows as well as ample wall space, a feature that Hicks said was intended to emphasize the use of art.

“Annabelle’s work has a strong relationship between wall space to windows, there’s lots of room for art,” he said. “She was able to distill her style down into every element of the interior.”

Floors are made of five-inch-wide white oak planks and doors are frameless. Bathrooms include stone sinks and heated floors while the kitchens all feature an island counter, Gaggenau appliances and fully vented ovens.

Storage space is available for purchase as are parking spots in the 200-car garage below the building. Residents are treated to an onsite gym, children’s playroom and an open-air amenity space with a grill. There will also be a doorman on site, concierge services and a live-in superintendent.